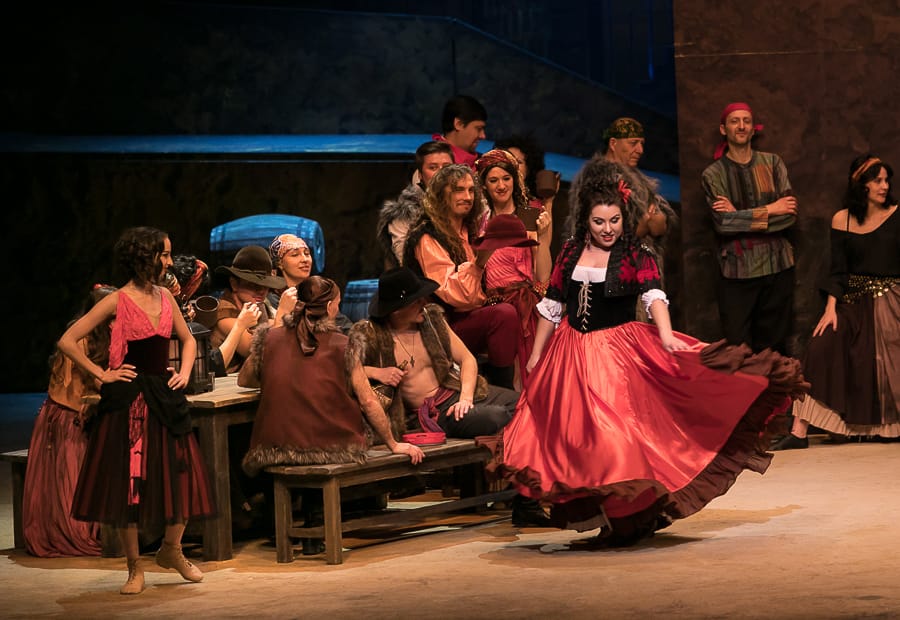 Act I
Scene 1
In a square in Seville near a cigar factory and a guardhouse: soldiers, street urchins, cigar factory workers and their loved ones mingle.

Micaëla arrives, looking for the corporal Don José. Moralès explains that José is in another company that is due to take over the guard. Micaëla decides not to wait and departs. The lieutenant Zuniga and José lead in the new guard, accompanied by a horde of children. Moralès tells José that Micaëla was asking for him.

It is break-time at the factory nearby and the women come out to smoke and flirt with the young men. Carmen is among them. Temperamental and bold she is accustomed to commanding the others. An encounter with José, who has thus far been ignoring her, awakens in her a passion. Her Habanera, a song of free love, sounds like a challenge, and the flower thrown at his feet, promises love. Micaëla returns, bringing José a letter from his mother in which she asks him to return and marry Micaëla.

Uproar suddenly breaks out in the factory and the women pour into the square, accusing Carmen of drawing a knife on her friend in a quarrel. Zuniga sends a guard to ascertain who instigated the fight. Carmen is taken from the factory to be interrogated but she refuses to answer the questions. The lieutenant ordered that the culprit be taken to prison. Carmen tries to seduce José, so that he might release her. Forbidden to speak, she sings, contriving to arrange a rendezvous with him at a tavern. He agrees to free her only if she will love him. Having received a promise, José lets her go.

Scene 2
In the Lillas Pastia’s tavern jollity abounds. It is the place where the secret meetings of the smugglers that Carmen helps take place. Carmen and her friends Frasquita and Mercédès are taking their leisure by singing and dancing. Zuniga is also there. He tells Carmen that José, demoted and jailed for a month for aiding her escape, has just been released.

The cries of a jubilant crowd are heard. Escamillo the toreador arrives. Ever cheerful, confident and bold, he is a friend of all taverns. His life is full of danger, in the arena the struggle is life-threatening but the reward is sweet: to be a hero and receive the glory and love of beautiful women. Carmen immediately captures his attention but she shows no interest.

Darkness falls. The guests leave the tavern. Under the cover of night the smugglers arrive, bent on their risky business. This time Carmen refuses to help them. She is waiting for a friend. José arrives but the joy of their meeting is cut short. A signal is heard in the distance, summoning him back to his barracks and he prepares to leave. Passion and duty conflict with each other in his heart. Carmen accuses him of not loving her. In response he describes his passion and how he treasured the flower she threw at him when they first met. As proof, Carmen insists he deserts and goes with her to the mountains.

Zuniga unexpectedly appears; hoping to win Carmen’s favour. When he sees José he orders him back to the barracks. But jealously causes him to draw his sword. The smugglers run in and separate them; then they tie up Zuniga. Don José remains with Carmen in order to begin a new life, full of danger.

Act II
A Mountain pass. The haggard smugglers have stopped for a short rest. Carmen and José are with them. The quarrel in the tavern is not forgotten, there is a great distance between them. Dreaming of a quiet peasant life, Jose suffers from infidelity to his duty and yearns for his home. Only his passion for Carmen keeps him in the smugglers' camp. But Carmen loves him no more; the gap between them is impassable.

Act III
Frasquita and Mercédès read their fortunes with cards and see a prosperous future. Carmen joins them. But however much she shuffles the cards, only death is foretold. The gypsy women leave, having been instructed to distract the customs officers who are blocking the smugglers’ path. José is left to guard the contraband goods.

Micaela appears. Hearing a shot she is frightened and hides. It is José firing at an intruder who turns out to be Escamillo. The toreador explains that he is pursuing Carmen, having heard that she no longer loves her soldier. The enraged José reveals himself and the rivals start to fight. Carmen stops them. Escamillo thanks her and invites everyone to his next bullfight in Seville and leaves. Crazed with jealousy, José threatens Carmen. The smugglers find Micaëlain her hiding place. She has come to beg José to return to his mother. José does not want to go. Micaëla then reveals that José’s mother is dying and wants to forgive him. He agrees to accompany Micaëla.

Act IV
It is a bright, sunny day. The square in Seville is full of people. Outside the arena a crowd is waiting for the bullfight to commence. Noisily and joyfully they welcome the procession of the heroes of the bullfight led by everyone's favorite Escamillo. Carmen is also amongst the welcoming crowd. She is attracted to the cheerful, brave bullfighter. Frasquita and Mercédès warn Carmen that José is following her, hidden in the crowd but Carmen does not listen to them; she decides to stay and talk to him. The crowd departs to watch the bullfight. José appears and pleads with her to return to him. He does not believe that she has fallen out of love. Carmen is adamant: she no longer loves him. Contemptuously tossing aside the ring he gave her Carmen tries to leave. Unable to cope with his despair, mad with suffering and humiliation José pulls out a knife and lunges at Carmen. But Carmen will not be killed: freedom-loving and proud, she throws herself onto the knife edge, and falls backwards. The jubilant crowd accompanies the exit of the victorious bullfighter Escamillo from the arena. They stop in horror seeing the murdered Carmen. José repents and confesses to killing the woman he loved.