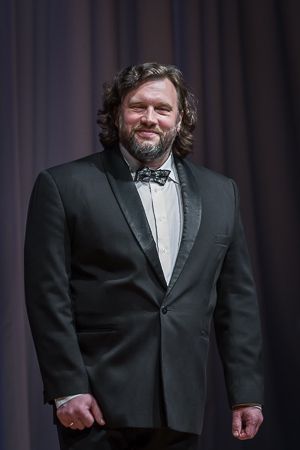 From 1996 to 2008 he was a soloist in the Vladivostok Chamber Musical Theatre under the direction of Vladimir Voronin.

He has participated in Russian-Japanese gatherings as part of the International Visual Art Biennale Festival (Vladivostok, 1999, 2011), and also in the Festival of the Countries of the Pacific Rim (Sakaiminato, Japan, 2002). He represented the Primorsky Region in the Days of Primorsky Culture in the Republic of Tatarstan (Kazan, 2012). He is a regular participant of the International Far Eastern Spring Festival (Vladivostok, 2008–2012, 2014, 2016).

In 2013 he became a soloist of the Primorsky Opera and Ballet Theatre.

Since 2016 he has been a soloist of the opera company of the Primorsky Stage of the Mariinsky Theatre.

In 2019, an audio recording of Sergei Prokofiev’s opera A Story of a Real Man with the participation of the artist became a laureate of the 2nd degree of the International Prize Pure Sound.

The singer’s repertoire also includes the bass roles in High Mass in B Minor (J.S. Bach), Requiem (W.-A. Mozart), The Music to the Ivan the Terrible (S. Prokofiev).