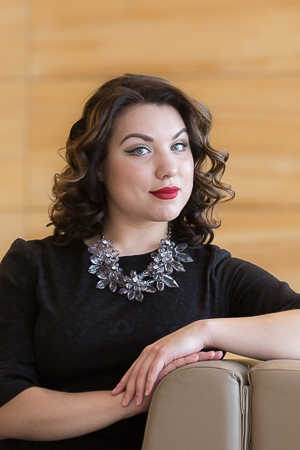 Laura Bustamante in the part of Lyubasha was the discovery of the performance. The singer has definitely got into the image and has not replayed for a second. Her key possession is her flexible, saturated and flighty voice. Lyubasha’s entire dramaturgic line was embodied by the natural low notes and the unchained “tops”. The actress’s singing skill lined up with her meaningful emotionality and special attention to the expressive power of the word.

Laura Bustamante stood out especially in the part of the jealously-ridden Lyubasha: with a strong, richly smooth, chesty sound, she conveyed the subtlest shades of her heroine’s tragedy.

From 2011 to 2015 she worked in the Tsaritsinskya Opera Theatre in Volgograd.

In August 2015 she became a soloist of the Primorsky Opera and Ballet Theatre.

In May 2019, she participated in the tour performances of the Tsar's Bride opera by Nikolai Rimsky-Korsakov directed by Vyacheslav Starodubtsev in the Zaryadye concert hall (Moscow) and in the Mariinsky-2 (St Petersburg).