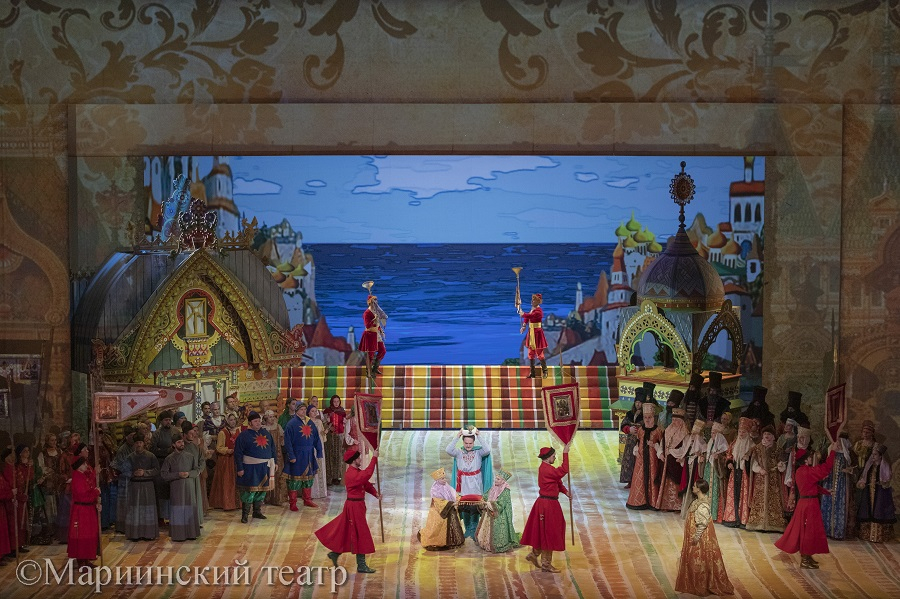 The Tale of Tsar Saltan

Prologue
Three sisters are sitting at home spinning yarn; each dreams of what she would do if she were the Tsaritsa. Unnoticed by the sisters, Tsar Saltan overhears the conversation. The Tsar likes Militrisa’s wish to bear him a brave son. Saltan enters the room to announce that all the sisters will live at his palace, the eldest as a cook, the second as a weaver and the youngest as his wife. Envious of Militrisa’s good fortune, the two older sisters together with the old woman Babarikha plan how they can undo her happiness.

Act I
While the Tsar goes off to war, the young Tsaritsa gives birth to a son. Her older sisters together with Babarikha write a letter to the Tsar, which says that the Tsaritsa has borne neither a daughter nor a son, neither a mouse nor a frog, but a kind of monster. Having made the Tsar’s Messenger drunk, they replace the Tsar’s letter with theirs one which says that the Tsaritsa and her progeny must be sealed in a barrel and thrown into the sea. Accompanied by the people’s wails, the barrel with Militrisa and the young Tsarevich inside is cast into the sea.
The barrel is washed ashore on the desert island of Buyan. Militrisa and the Tsarevich Guidon, now a young man, brake out of their trap. Having made a bow, Guidon directs his steps to the shore to hunt some fowl. Having seen a huge kite chasing a swan, he kills the evil kite. The Swan-Bird promises Guidon to repay kindness with kindness and disappears.
In the morning the magical city of Ledenets appears out of the mist. Guidon is hailed by its residents and asked to become their Prince.

Act II
Guidon has become the people’s Prince, but he thinks longingly of his father. His sad gaze follows a ship that is headed towards Saltan’s kingdom. The Swan-Bird appears from the sea to help him. The Prince is turned into a bumblebee to catch up with the ship.
Tsar Saltan sits sadly on the throne in his palace in Tmutarakan. Povarikha, Tkachikha and Babarikha sit alongside of him. The ship lands at Tmutarakan, and the Tsar invites the shipmen to his palace and holds a feast for them to ask various questions. His guests tell of the beautiful city of Ledenets, of a squirrel in a crystal cage, of thirty-three knights of the sea, and of the brave and mighty Prince Guidon. Saltan is astonished – he wishes to see the miraculous city. Tkachikha and Povarikha anxiously try to dissuade him, and the bumblebee stings each of them on the eyebrow. Babarikha tries to distract Saltan with a tale of the most wonderful miracle in the world – a Tsarevna of indescribable beauty, and the bumblebee stings her on the eye and flies off, leaving behind chaos and confusion.
Guidon cannot forget Babarikha’s tale and dreams of the Tsarevna of wonderful beauty. He asks the Swan-Bird for help. The Swan-Bird answers that she is the Tsarevna and turns into the beautiful Princess. Tsaritsa Militrisa gives her blessing to the young couple.
Saltan’s ship lands on the island of Buyan. The Tsar and his retinue come ashore. In the palace Prince Guidon greets Saltan and asks him to sit on his side of the table. The Tsar and all the guests are astonished when they see the magical squirrel, the knights of the sea, headed by Chernomor, and the dazzlingly beautiful Swan-Princess. Saltan is excited; he asks to show him the Tsaritsa. Militrisa enters. Saltan learns that Prince Guidon is his son. Povarikha and Tkachikha beg for forgiveness. Babarikha tries to escape. Saltan is overjoyed; he forgives the plotters and gives a great feast to the world.

Running time: 2 hours 40 minutes
The performance has one interval