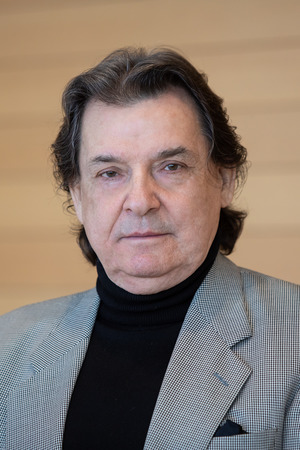 Waleriy Trubin-Leonoff was born in the town of Michurinsk, Tambov region. In 1970 he graduated from the Leningrad Music School of the Rimsky-Korsakov Leningrad State Conservatory (piano and choir conducting class, tutor V. Otrezov).

In 1974 he graduated from the Rimsky-Korsakov Leningrad State Conservatory, class of Professor A.I. Anisimov (conductor and chorus department), class of Professor I.A. Musin (opera and symphonic conducting, 1977). He finished postgraduate course in 1981 in the class of People’s Artist of the USSR Yu.Kh. Temirkanov.

During this period, the first performances of The Symphony of Psalms by Igor Stravinsky, Symphony No.1 by Gustav Mahler, cantata John of Damascus by Sergey Taneyev were held in Luhansk. In 1986, in recognition of his contribution to the development of the musical art, he was awarded the Honored Artist of Ukraine title.

In 1988–1994, he was artistic director and chief conductor of the Symphony Orchestra of the National Television and Radio Company of Belarus, Minsk. In 1989–1992, he was the conductor at the Bolshoi Theatre of Belarus. Also in 1988–1992 he taught at the Minsk State Conservatory, Department of Opera and Symphonic Conducting.