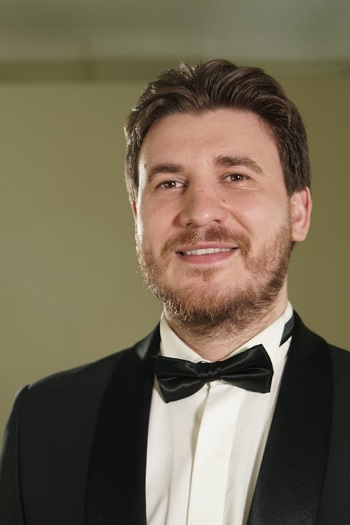 Born in Lvov, Ukraine, Sergei Sevastyanov studied at the Theoretic and Vocal Departments of the S.P. Lyudkevich Lvov Music College from 2002 till 2006. In 2007 he began to work at the choir of the S. Krushelnytska Lvov State Academic Theatre of Opera and Ballet. In 2013 he completed his studies at the N.V. Lysenko Lvov National Music Academy.

Together with the choir of the Lvov Theatre, he toured over France and visited Paris four times, singing at various Parisian concert venues.

From 2012 Sergei Sevastyanov served as a soloist at the S.Krushelnytska State Academic Theatre of Opera and Ballet. In 2014 he had to immigrate together with his family to Russia.

From September 2021 Sergei Sevastyanov has been a soloist of the Primorsky Stage of the Mariinsky Theatre.

His concert repertoire includes Messa da Requiem by G. Verdi and Requiem by W.-A. Mozart. His chamber repertoire comprises compositions by Russian and West European authors, folk and war songs, and songs by A. Pakhmutova and other composers.