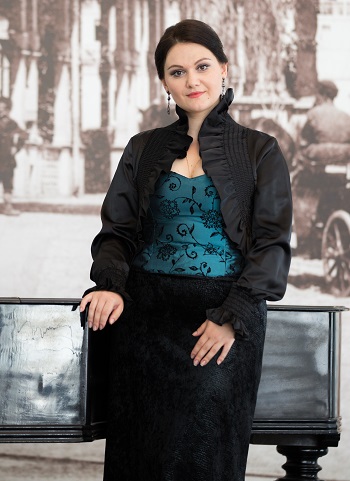 Alyona Diyanova who sang the part of Liza has physical perfection for this role, displaying feminine charm and an excellent voice. Her lyrical soprano is distinguished by a special timbre – pure, soft, brilliant, and a bit fragile (...) She possesses the gift of touching the listener’s heart; the famous aria in Scene 6 (“Ah, I am worn by grief”) was performed with faultless musicianship, deep feeling, and great élan. Her success with the public is fully deserved.

In June 2014 the role of Cio Cio San in the production of Madam Butterfly was performed by soloist of the Astrakhan State Theatre of Opera and Ballet Alena Diyanova. During the course of one opera the heroine marries, gives birth, waits for her lover and dies. A. Diyanova expressively conveyed the heroine’s emotions and brilliantly dealt with the complexities of the part.

A strong and beautiful voice, good vocal form and acting skills were demonstrated by Alena Diyanova in the role of Rosalinde.

In 2006 she participated in tours in Saratov, Nizhny Novgorod and Nizhny Novgorod Region together with the Military Orchestra and the concert group of the Song and Dance Ensemble of the Privolzhsky Regional Command of the Interior Ministry of the Russian Federation.

In 2009, she performed the part of Kuma in The Enchantress opera in a joint production by the NNGK and the Nizhny Novgorod Philharmonic (conductor Alexander Skulsky, director Vladimir Agababov).

In 2009 she took part in the master class of Alla Simoni, a teacher at the International Academy of Singing (Pesaro, Italy).

From 2010 to 2015 she was a soloist of the Astrakhan State Theatre of Opera and Ballet. She has performed in Astrakhan and the Astrakhan Region, in Nizhny Novogorod, Makhachkala and Baku.

In September 2015 Alena Diyanova became a soloist of the Primorsky Opera and Ballet Theatre. Since 2016 she has been a member of the Opera Company of the Primorsky Stage of the Mariinsky Theatre.

In May 2019 she participated in tour performances of The Tsar’s Bride opera at the Zaryadye Concert Hall in Moscow and the New Stage of the Mariinsky Theatre in St Petersburg.