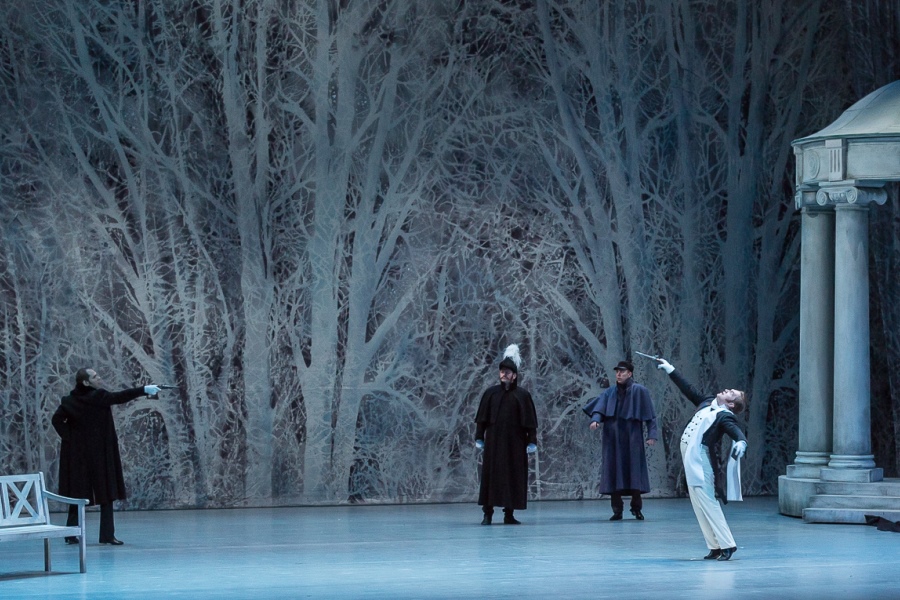 Act I
Scene 1. The Larin Family Estate
Madam Larina, her daughters Tatiana and Olga and their nurse are enjoying fine evening weather. A group of peasants bring their mistress a decorated sheaf of wheat, a customary gesture to celebrate the end of harvest. Unexpectedly guests appear; their neighbor and Olga’s fiancé the poet Lensky and his friend Eugene Onegin, recently arrived from St Petersburg. The visit of the city dandy disrupts the calm routine of the estates inhabitants. Tatiana is deeply affected by her meeting with Onegin. Lensky, finally alone with Olga, declares his love for her.

Scene 2. Tatiana’s Letter
Tatiana is overflowing with new emotions. Seeing the turmoil Tatiana is in, Filippevna the nurse tries to distract her and calm her. However, left alone, Tatiana writes a letter to Onegin in which she confesses her love for him. At dawn she asks her nurse to give the letter to the guest from St Petersburg.

Scene 3.The Explanation
Tatiana anxiously awaits an answer to her letter. Onegin arrives. He explains that while he finds Tatiana’s affection sweet he does not reciprocate her feelings.

Act II
Scene 4. A Ball at the Larin Estate
Many guests have come to celebrate Tatiana’s saint’s day. The provincial ball, with its gossip and idle chatter, utterly bores Onegin. Annoyed with Lensky for bringing him there he begins to pay court to Olga. Lensky, enraged by the behavior of his friend, challenges Onegin to a duel. The guests try in vain to reconcile the friends.

Scene 5. The Duel
Lensky, waiting for the duel to commence, melancholically reflects upon his life. Onegin arrives, and like Lensky, he is ready to make peace. Yet the laws of honour make this impossible. A shot is fired. Lensky falls to the ground dead.

Act III
Scene 6. A Ball in St Petersburg
After a long absence Onegin returns to St Petersburg. At a ball held in an aristocratic home he meets Tatiana, now married to Prince Gremin. Onegin is shocked: how is possible that this noble, refined society lady is the same girl he once chided for unguarded emotions?! Uneasily Onegin is forced to admit: “Alas. Without a shadow of doubt I am in love like a boy, a passionate youth”.

Scene 7. The Meeting
A final encounter between Onegin and Tatiana: Onegin’s words are full of repentance. Begging for reciprocation he tries to wrest a declaration of love from her. But Tatiana is firm in her decision to stay with her husband. In despair Onegin cries out “Ignominy! Anguish! Oh, my pitiable fate!”