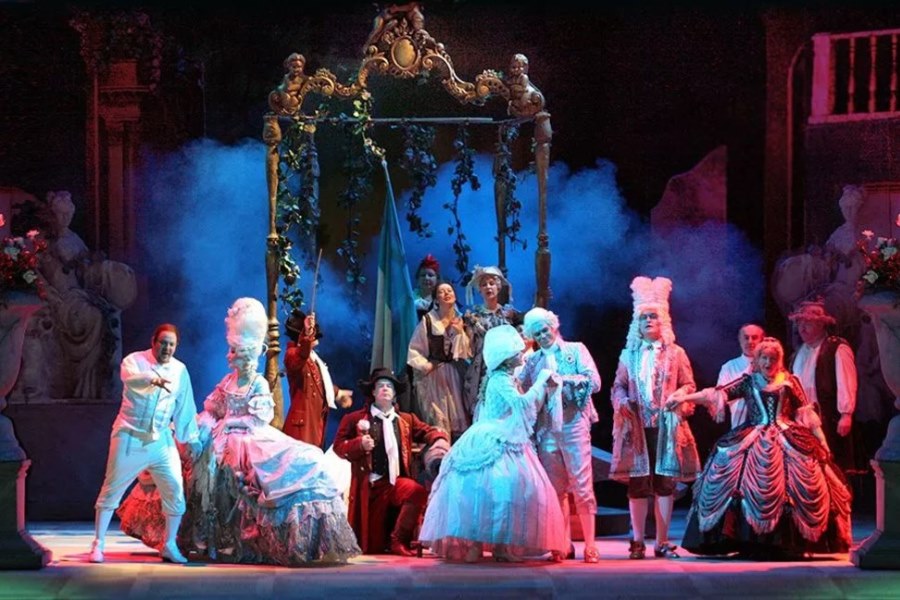 (the performance will have synchronised Russian supertitles)

It is the wedding day of Figaro, Count Almaviva´s faithful servant. He is to marry the mischievous Susanna, personal maid to the Countess.

There is no doubt that the wedding will not pass without incident, because the Count is involved! Even the matter of his wedding gift to the young couple is not without its complications: they have been promised a room linking his apartments with those of the Countess. So convenient – if either of them is needed, they can be on the spot in a moment. Figaro is pleased, but Susanna… Susanna has her suspicions. After all, if the room is so convenient, it means the Count can get to her: Almaviva, she says, wishes to make use of the right to "the first night", the famous "droit de Seigneur" by which landlords may enjoy all the brides on their estates on their wedding night – before the husband may do so.

Figaro cannot believe his ears. After he married the beautiful Rosina, the Count promised to renounce this ancient right. But Figaro is not about to let himself be taken for a ride. He´s a good servant, but he is not prepared to stand by and be ridden over roughshod.

The marriage is opposed by the ageing duenna Marcellina and her former admirer, Doctor Bartolo. Bartolo can never forget how the cunning Barber of Seville–as Figaro was known at that time–made a fool of him when bringing together Almaviva and Rosina. Now the vengeful old man wishes to get his own back. Marcellina, meanwhile, lent Figaro money in return for a written promise to marry her if he did not repay it. Bartolo hopes to do his worst against the hated Figaro by forcing him to marry Marcellina, even though the duenna still has the power to arouse feelings in him.

Susanna, meanwhile, listens as the young page Cherubino tells of his love for the Countess. But not for her alone. The youth is in love with all the women in the castle and keeps finding himself in all sorts of unfortunate situations. Just recently, the Count found him alone with Barbarina, the young the niece of the gardener Antonio, and gave orders that the boy be expelled from the castle. Only the intervention of the Countess can soothe Almaviva´s anger and Cherubino asks Susanna to put in a good word for him with her mistress. But the Count himself appears at this moment. Hearing his approach, Cherubino hides in fright and thus involuntarily becomes a witness as Almaviva begs of Susanna a meeting. But his Grace too is forced to follow the page´s example, for in comes the music master, don Basilio, and the Count has no desire to be caught alone with Susanna. He too hides. Don Basilio relates the story of Cherubino´s love for the Countess and, beside himself; the Count leaps form his hiding place. His anger grows when he sees Cherubino.

Things are not going well for the page, but Susanna comes to his aid. Hinting that Cherubino has witnessed the Count´s outpourings. The girl manages to calm her master´s anger. Almaviva´s embarrassment increases when he is forced to listen to the assembled peasants who have come to thank their Lord for renouncing his "droit de Seigneur". It is Figaro who has brought them to the castle in an effort to push forward his wedding to Susanna. Almaviva is forced to agree to the wedding and agrees to be a guest at the celebrations. Taking advantage of the Count´s confusion, Cherubino manages to gain his pardon, but only on condition that he join the army immediately. Figaro sets out before the pampered page all the "horrors" of military service.

The Countess´s Room
Susanna, the Countess and Figaro have decided to teach the Count a lesson. Susanna is to promise him a rendezvous but Cherubino will appear in her place, wearing her dress. Cherubino has the dress on when Almaviva is heard and the page is forced to hide in the neighboring room. But the Count notices that the door of the room is locked. He demands that the Countess give him the key, and when she refuses to give it to him, he goes off to get tools to break the door down, insisting that the Countess accompany him. Susanna immediately takes Cherubino´s place in the room, the page jumping from the window. The Count returns triumphant – now he can prove that his wife has been unfaithful. The door is broken open and Susanna emerges from the room. Covered in shame. Almaviva is forced to beg his wife´s pardon. But then the gardener Antonio unexpectedly appears with a broken flowerpot – someone just jumped from the window, he says, and damaged his flowers. Figaro comes to the rescue of the Countess and Susanna, declaring that it was he, again forcing the Count to apologize. Enter Bartolo, Don Basilio and Marcellina, come to lodge the old duenna´s claim for breach of promise. Figaro has no money to pay his debt – and he is to answer before a court.

A room in the castle
The court (in the person of Count) has made its decision in favor of Marcellina. Figaro is saved, however, when it becomes clear that he is in fact the son of Marcellina and Bartolo, who was stolen as a baby. The joyful parents decide to celebrate their wedding along with that of their newly found son.
During the wedding celebrations Figaro notices that the Count is reading a note. In it Susanna has appointed a meeting with the Count. She has agreed to change dresses with the Countess, and so the woman who will meet the Count in his garden that night will in fact be his wife. The note is sealed with a pin. If the Count agrees to be in the appointed place at the appointed time, he must return the pin to Susanna. Figaro, unaware of his wife´s plot, becomes suspicious and decides to follow the Count´s movements.

The garden of Almaviva´s castle
In the moonlight, Barbarina is looking for a pin she has lost in the grass. In answer to Figaro´s question as to what she is doing, she answers that the Count has ordered her to deliver the pin to Susanna. Taken aback at his bride´s lack of faith, Figaro decides to lie in wait for the Count and Susanna. Susanna appears in the Countess´s dress – which leads to a multitude of misunderstandings. But all comes right in the end. The Count begs his wife´s forgiveness and the Countess grants it. A day of commotion and confusion draws to a close in merry celebrations.

A GLIMPSE INTO THE HISTORY OF THE OPERA

“I have just returned from the Opera Comique, where I heard Le nozze di Figaro for the second time, and if they perform it again, then I will go again, and again, and again! My God, how divinely good the music is…”
P.I. Tchaikovsky

In his Memoirs, the librettist and dramatist Lorenzo Da Ponte, telling of his meetings and conversations with Mozart, recalled that it was Mozart who originally suggested the idea of their collaboration on a new opera based on a notorious Beaumarchais’s comedy La folle journée, ou Le Mariage de Figaro. Beaumarchais’s play was staged in Paris in 1784 and opened to a sensational success, however it was soon banned everywhere. Rehearsals of Le Mariage de Figaro in Vienna in the German translation by Emanuel Schikaneder were also stopped.

Mozart and Da Ponte worked on the opera in total secrecy, telling no-one. When the opera was complete, Lorenzo Da Ponte went with it to the Emperor and it took him all his ingenious charm and eloquence to convince Joseph II that the opera was absolutely politically harmless and all its content revolved around a family conflict between the Count and the Countess, while the music abounded in all sorts of merits. Having listened to several excerpts from Le nozze di Figaro (that was the new title of the opera), the Emperor authorized its rehearsals in the Vienna Burgtheater. At the very first meeting between Mozart and the orchestra, when Francesco Benucci was coming to the end of Figaro’s aria “Non più andrai”, farfallone amoroso..” (You won't go any more, amorous butterfly…”), singing it with all the power of his rich baritone, the whole of the performers on the stage and those in the orchestra, as if actuated by one feeling of delight, vociferated 'Bravo! bravo! maestro.!” All other rehearsals retained that high-spirited atmosphere and the artists and musicians kept calling out: ”Viva! viva grande Mozart!”. The opera conducted by the composer himself premiered to an equally eсstatic receipt on 1 May 1786. In its first year, the number of performances of Le nozze di Figaro could well match that of popular Italian operas, which was unheard of at that time. However, Mozart’s enemies somehow succeeded in getting the opera removed from the repertoire. The subsequent Prague production of the opera in December 1786, seven months after its premiere in Vienna, was a triumphant success. It was at that moment that the eternal life of Le nozze di Figaro began. The opera has been staged and restaged an endless number of times by almost all musical theatres all over the world. In Russia, it was first performed in 1815 by the St Petersburg German Opera Company. In Russian (in the timeless translation by the Great Russian composer P.I. Tchaikovsky, who adored this work) Le nozze di Figaro was first performed in Moscow on 5 May, 1876 by the Conservatory students. In St Petersburg the opera was first staged by O. Palechek at the Mariinsky Theatre on 25 September, 1901 (featuring (V. Kastorsky as Almaviva, M. Cherkasskaya as the Countess, M. Mikhailova as Susanna, D. Bukhtoyarov as Figaro, S. Gladkaya as Cherubino and N. Fride as Marcellina). The next time Le nozze di Figaro was heard at the Mariinsky Theatre almost a century later – on 5 April, 1994.

The performance has one interval