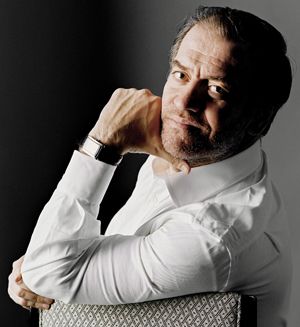 Gergiev carries a disproportionate share of the music world on his shoulders. He is something of a national hero in Russia for having kept alive the Mariinsky Theatre after the collapse of the Soviet Union. Under his leadership, the Mariinsky has become one of the most celebrated – and recorded – opera companies in the world.

As the star conductor he undoubtedly is, Gergiev is one of those conjurors of sounds who can draw the audience to them in such a way that it feels the earth move.

We have all marvel Valery Gergiev at his truly inspirational music-making, which, alongside his totally unbelievable energy, passion for music, and great qualities of friendship and idealism, have forged him a unique place in the world of music"

has turned the Mariinsky Theatre with its centuries-old traditions into the world’s most dynamic opera and ballet company, nurturing an endless stream of brilliant singers and dancers. The maestro fully deserves his rating by Time magazine as one of the 100 most influential people in the world today.

Valery Gergiev is a vivid representative of the St Petersburg conducting school and a former pupil of the legendary Professor Ilya Musin. While still a student at the Leningrad Conservatoire, Gergiev won the Herbert von Karajan Competition in Berlin and the All-Union Conducting Competition in Moscow, following which he was invited to join the Kirov Theatre (now the Mariinsky) as an assistant to the principal conductor. His debut as a conductor at the theatre came on 12 January 1978 with Sergei Prokofiev's opera War and Peace. In 1988 Valery Gergiev was appointed Music Director of the Mariinsky Theatre, and in 1996 he became its Artistic and General Director (leading the orchestra and opera and ballet companies).

Through maestro Gergiev's efforts the Mariinsky Theatre has revived operas by Richard Wagner. In 1997 came Parsifal, which had not been performed in Russia for more than eighty years, in 1999 Lohengrin was revived and by 2003 the grandiose operatic tetralogy Der Ring des Nibelungen had been staged in full. That was the first time following an interval of almost a century that the complete tetralogy was staged in Russia and the first production in Russia to be performed in the original German. The tetralogy has been performed on Mariinsky Theatre tours to great acclaim in Moscow as well as abroad – in the USA, South Korea, Japan, Great Britain and Spain. The theatre's repertoire also includes productions of Tristan und Isolde (2005) and Der Fliegende Holländer (1998, 2008).

Under the direction of Valery Gergiev the Mariinsky Theatre has become a major theatre and concert complex, without par anywhere in the world. In 2006 the Concert Hall was opened, followed in 2013 by the theatre's second stage (the Mariinsky-II), while since 1 January 2016 the Mariinsky Theatre has had a branch in Vladivostok - the Primorsky Stage and since 2017 in Vladikavkaz. Other projects of Valery Gergiev hosted by the Mariinsky Theatre include media broadcasting, on-line broadcasts of concerts and the establishment of a recording studio. 2009 saw the launch of the Mariinsky label, which to date has released more than thirty discs that have received great acclaim from the critics and the public throughout the world; these recordings include symphonies by Tchaikovsky and piano concerti by Tchaikovsky and Shostakovich, operas by Wagner, Massenet and Donizetti and an entire plethora of other works. Works by Verdi (Attila) Tchaikovsky (symphonies), Rimsky-Korsakov (The Tale of Tsar Saltan, The Golden Cockerel), Strauss (Die Frau ohne Schatten), Prokofiev (Romeo and Juliet, Cinderella, The Gambler Semyon Kotko), Shchedrin (The Lefthander) have been released on DVD.

Valery Gergiev's international activities are no less intensive and active. Having made debuts in 1991 at the Bayerishe Staatsoper (Musorgsky's Boris Godunov), in 1993 at the Royal Opera House, Covent Garden (Tchaikovsky's Eugene Onegin) and in 1994 at the Metropolitan Opera (Verdi's Otello with Plácido Domingo in the title role), the maestro successfully continues to collaborate with the world's great opera houses. He works with the World Orchestra for Peace (which he has directed since 1997 following the death of the ensemble's founder Sir Georg Solti), the Philharmonic Orchestras of Berlin, Paris, Vienna, New York and Los Angeles, the Symphony Orchestras of Chicago, Cleveland, Boston and San Francisco, the Royal Concertgebouw Orchestra (Amsterdam) and many other ensembles. From 1995 to 2008 Valery Gergiev was Principal Conductor of the Rotterdam Philharmonic (of which he remains an honorary conductor to this day), and from 2007 to 2015 he was Principal Conductor of the London Symphony Orchestra. From 2015 to 2022 the maestro headed the Munich Philharmonic and from 2018 to 2022 the Verbier Festival Orchestra.

Valery Gergiev is the founder and director of prestigious international festivals including the Stars of the White Nights (since 1993), the Moscow Easter Festival (since 2002), the Gergiev Festival in Rotterdam, the Mikkeli Festival and the 360 Degrees festival in Munich. Since 2011 he has directed the organisational committee of the International Tchaikovsky Competition. Valery Gergiev focuses much of his attention on working with young musicians. One of his initiatives saw the revival of the All-Russian Choral Society; this includes the Children's Chorus of Russia, which has appeared at the Mariinsky-II, the Bolshoi Theatre and at the closing ceremony of the XXII Winter Olympics in Sochi. Since 2013 the maestro has directed the National Youth Orchestra of the USA and regularly appears with the youth orchestras of the Schleswig-Holstein Festival, the Verbier Festival and the Pacific Ocean Music Festival in Sapporo. Since 2015 the Mariinsky Theatre has run the Mariinsky NEXT annual festival, which features children's and youth orchestras of St Petersburg.