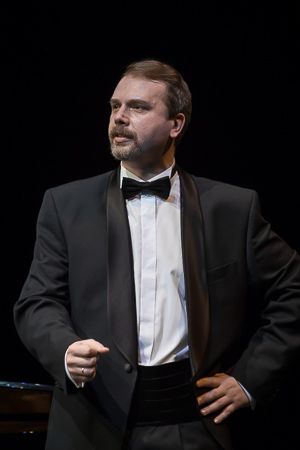 Vadim Soloviev was born in Leningrad. In 2003 he graduated from ITMO University in St Petersburg where he studied “computing machines, systems, complexes and networks”. In 2009 he graduated from the vocal-directing faculty of the St Petersburg Conservatory after studying solo singing with Honoured Artist of Russia E. Fedotov. From 2011 — 2012 he completed post-graduate studies in the St Petersburg Conservatory with People’s Artist of Russia M. Kit.

In the period of his studies in the conservatory he participated in productions by the opera studio: The Marriage of Figaro, W. A. Mozart, Eugene Onegin and Iolanta by P. Tchaikovsky and interned at “The St Petersburg Opera” musical theatre. He took part in celebratory events surrounding the 60th anniversary of the end of the 2nd World War that were organized on the initiative of the dean of the conservatory. Soloviev regularly performs in chamber concerts in various concert halls in St Petersburg and Russia; he has sung in the State Academic Cappella, the St Petersburg Philharmonia, The Elena Obraztsova Cultural Centre, The Beloselsky-Belozersky Palace, the Sheremetevsky Palace in the Museum of Music.