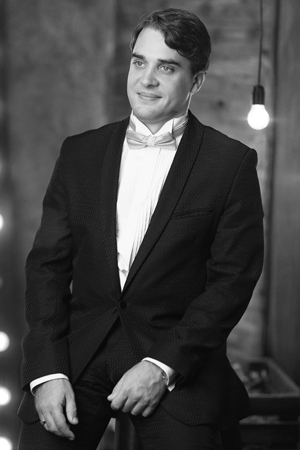 Dmitry Grigoriev was born in Nizhny Novgorod. Since 2013 Dmitry Grigoryev has been a trainee in Russkaya Opera, taking singing lessons with Sergey Moskalkov. He has participated in master classes of Alexander Vedernikov. A short while he has studied at the Gnessin Academy of Music in Moscow (class of Andrei Grigoriev).

In 2016 Dmitry became a Fellow at the Atkins Young Artists Program in Mariinsky.

In December 2015 Dmitry sang the bass role in Oratorio Pathetique by Sviridov with the Bolshoi Theatre Symphony Orchestra and Choir conducted by Alexander Vedernikov. In the spring of 2016 he joined Maestro Gergiev and Mariinsky Orchestra on their South American tour, performing a series of solo chamber recitals in Mexico and Chile (collaborating with American pianist Myra Huang). In 2017, Dmitry Grigoriev appeared as Bartolo in Le nozze di Figaro at the Second International Mariinsky Far East Festival in Vladivostok.