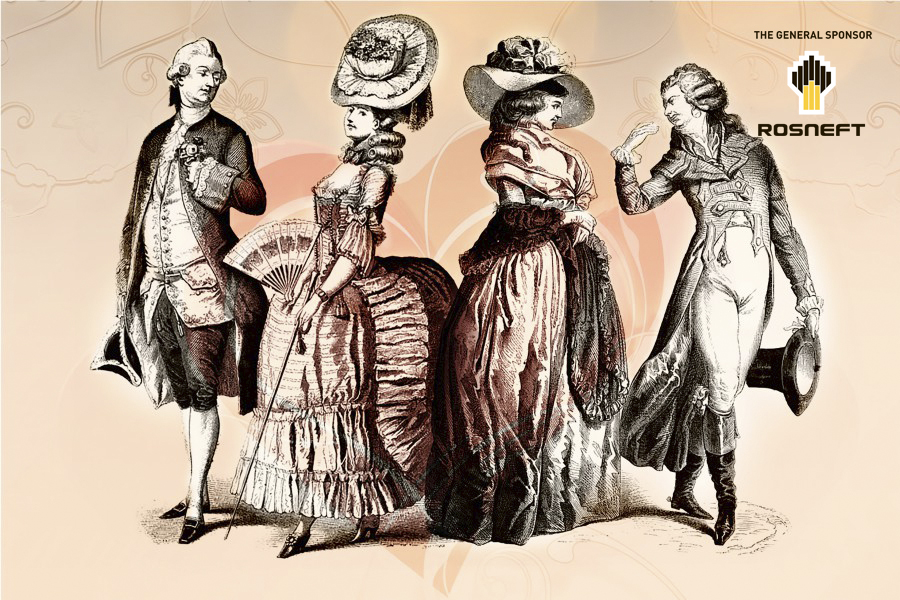 A coffee-house. Ferrando and Guglielmo proclaim the virtues of the sisters Dorabella and Fiordiligi, to whom they are betrothed; Alfonso is sceptical (trio, "La mia Dorabella"). The young men prepare to defend the ladies´ honour with swords, but the diatonic brilliance of music shared by all three argues no great discord. Alfonso declines to fight, but calls them simpletons to trust female constancy: a faithful woman is like a phoenix; all believe in it but none has seen it (his mocking pianissimo unison cadence resembles the motto). The other insist that the phoenix is Dorabella/Fiordiligi (trio, "E la fede delle femmine"). Alfonso wagers 100 zecchini that fidelity will not endure a day of the lovers´ absence; he will prove it if they promise to obey him while wooing each other´s betrothed in disguise. Ferrando plans to spend his winnings on a serenade, Guglielmo (the first division between them) on a meal; Alfonso listens politely (trio, "Una bella serenata"). An extended orchestral coda closes a scene of purely buffo electricity.

A garden by the sea (morning). The girls sing rapturously of their lovers (duet, "Ah guarda sorella"); Dorabella (surprisingly, in view of the sequel) touches a note of melancholy before they launch into voluptuous coloratura in 3rds, united in loving the idea of loving. Alfonso appears, the prolonged F minor cadences of his tiny aria ("Vorrei dir") choking back the awful news: their lovers are to leave for active service. The men take solemn leave with only hints at lyricism (quintet, "Sento, o Dio"). The girls´ agitation is coloured by the dominant minor; Alfonso quells any premature delight at this evidence of love. Ferrando´s lyricism (to a motif from the trio, "Una bella serenata") now matches the girls´; Guglielmo sings with Alfonso (this inevitable consequence of differences in tessitura continually invites differentiation of character). The girls declare they will die. A march is heard (chorus, "Bella vita militar"). They embrace, promising a daily letter, their rapturous indulgence in misery (particularly intense in the melodic line, taken by Fiordiligi) counter-pointed by Alfonso´s efforts not to laugh (quintet, "Di scrivermi ogni giorno"). The men embark (reprise of the chorus); Alfonso joins a moving prayer for their safety (trio, "Soave sia il vento"), the orchestra evocative yet sensuous. Alfonso prepares for action (arioso); "He ploughs the waves, sows in sand, traps the wind in a net, who trusts the heart of a woman".

A furnished room. Despina has prepared the ladies´ chocolate and is sampling it when they burst in. Dorabella explains their despair, but her extravagant grief leaves her barely coherent (obbligato recitative and the first real aria,"Smanie implacabili"). Despina cannot take them seriously; surely they can find other lovers. In the teeth of their protests she inverts Alfonso´s creed (aria, "In uomini"): men, especially soldiers, are not expected to be faithful; women should also use love to enjoy themselves. Alfonso bribes Despina to assist him, without revealing the plot. The men enter as "Albanians", their bizarre disguise impenetrable even to the sharp-witted Despina (sextet, "Alla bella Despinetta"). Recovering from laughter, she helps them to plead with the ladies (Alfonso being concealed); they are rejected in a furious Allegro. Alfonso claims them as his friends, but after the men´s voices unite, turning recitative towards arioso, Fiordiligi articulates her constancy in a powerful recitative and aria ("Come scoglio"); she stands firm as a rock in tempestuous seas. Guglielmo´s patter-song in praise of his own appearance (especially the moustaches) find no favour ("Non siate ritrosi"). As the outraged girls depart, the men bubble with delight (trio, "E voi ridete?"), a brilliant hocket covering Alfonso´s insistence that the more the girls protest, the more sure is their fall. Guglielmo wonders when they can get lunch; Ferrando enjoys the atmosphere of love ("Un´ aura amorosa"), muted violins and clarinets supporting his ardently extended line.

The garden (afternoon). At the beginning of the finale, the girls unwittingly share Ferrando´s mood of longing, spinning a tender D major melody to a gently ironic rococo decoration of flutes and bassoons. How their fate has changed! Their sighs are displaced by fear when the men rush in drinking poison, to music (in G minor) suddenly suggestive of tragic violence. Alfonso and Despina go for help, instructing the ladies to nurse the men, who are thoroughly enjoying themselves; yet minor modes prevail as never before in Mozart´s finales. Despina, to a pompous G major minuet, appears disguised as the doctor, invoking Mesmer as she magnetizes out the poison. The key abruptly changes to B: the men profess to believe they are in paradise. In the final Allegro (in D) the men request a kiss and are again rebuffed.

The comedy Thus Do They All, or The School for Lovers (1790) was the latest of the three operas composed by Mozart in collaboration with the wonderful librettist Lorenzo Da Ponte. According to contemporaries, this plot was allegedly prompted by the Austrian Emperor Joseph II himself, who strongly recommended the authors a funny event from real life. Two officers made bets about the loyalty of their beloved. Having decided to test their feelings, they dramatized a hasty departure for the war, and then, disguised and dressed as aliens from the East, began to pay addresses to the brides in the absence of their “real” fiancées. To their utter surprise, they soon succeeded, losing their bet.

The frivolous opera story, the games with morals and the common sense have largely determined the difficult fate of Mozart’s masterpiece. Throughout the 19th century and into the first third of the 20th century, the libretto of Thus Do They All was now and then subjected to amendments. It took a while to realize that the music of Mozart and the libretto of Da Ponte formed a single artistic whole. Mozart’s music elevates the plot to a philosophical understanding of the foundations of human life, drawing this depth precisely in the contrast between the external and internal action of the opera. The subtext of the comedy is very serious and multivalued. Its main topics are the mystery of the mutual attraction between man and woman, love as an irrational element not subject to moral prohibitions, volatility as a natural form of life. The ambiguity of Mozart’s vision of these themes is expressed through the coexistence of different points of view of the heroes, each of which is true in its own way. The frivolous trifle at first glance, the play carries an important message: Don’t play jokes with love.

Da Ponte’s distinguished pencraft has promoted birth of one of the most refined operas, not only in Mozart’s art, but also in the world opera heritage. The beauty and artistic perfection of music is striking even for Mozart’s genius. Each of the six main characters of the opera has to be not just a singer, but an actor, a master not only of vocals, but also of the dramatic dialogues accompanied by harpsichord. The concert performance of the virtuoso masterpiece by Mozart and Da Ponte is not at all inferior to its stage incarnations, giving the soloists the opportunity to demonstrate various aspects of their artistic talent, and allowing the public to directly enjoy the brilliant music and text.

The Atkins program is a project of the Mariinsky Theater that unites the world’s leading teachers, accompanists, tutors and consultants on vocal skills, performing traditions and practices, languages, musical styles, acting technique, interpretation, and theatrical movement. The scholarship holders of the project are nine young singers who have already received public recognition, laureates and holders of special prizes and diplomas of the most prestigious international competitions and festivals. During the season the soloists work with the teachers and pianists of the Mariinsky Theater, as well as with the teachers of the Metropolitan Opera, Covent Garden, the Opera San Francisco, the Teatro Regio in Torino. The scholarship holders are coached by such tutors as Craig Rutenberg, Christopher Middleton, Dennis Jock, directors Lori Feldman, Peter McClintock and Paula Williams.

Participation in the Program offers exceptional opportunities for artistic and professional development such as studying abroad or practicing Italian in L’universita per stranieri in Siena.

Along with the improvement of the singing skills, the Atkins scholarship holders tour with the troupe of the Mariinsky Theater and take part in various festivals, such as Stars of the White Nights, the Easter Festival, the International Far Eastern Mariinsky Festival, Mariinsky – Vladikavkaz, etc. Also, the Atkins Program participants are involved in more than thirty productions of the Mariinsky Theater, among them: The Idiot, Eugene Onegin, Don Juan, The Nightingale, Traviata, The Love Drink, Benvenuto Cellini, The Tsar’s Bride, Simon Boccanegra, Thus Do They All, The Oprichnik, Othello, Betrothal in a monastery. The soloists have been on several tours in Mexico and Chile, and collaborated with the Munich Philharmonic Orchestra. The artistic director of the project is Valery Gergiev.

The project exists thanks to the generous financial support of Veronika Atkins (USA).