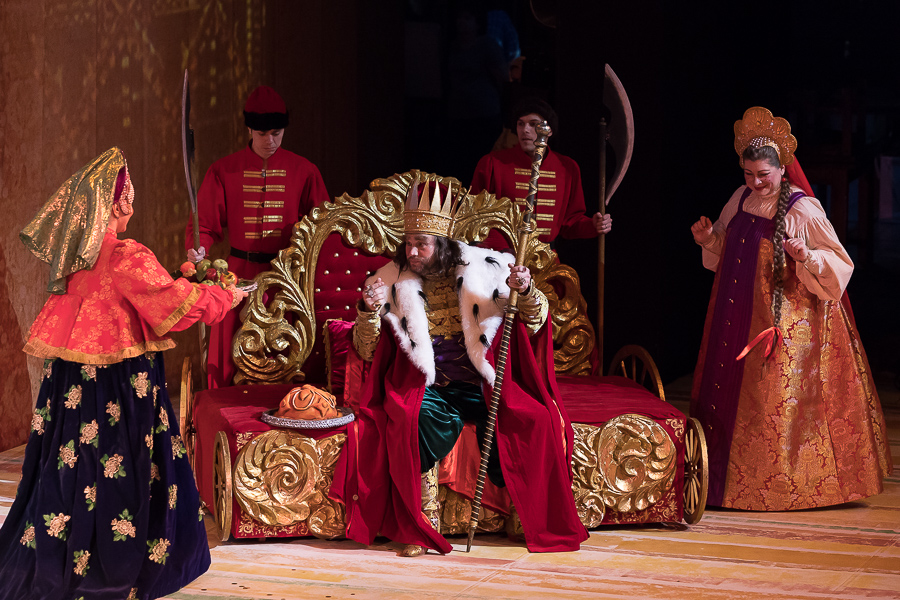 Prologue
In a log cabin three sisters are sitting spinning yarn and dreaming about what they would do if the Tsar married them. The Tsar, unobserved by the sisters, is listening to them. He likes Militrisa’s dream to bear him a heroic son. Saltan enters the room and announces his decision: all three will live at the palace, the eldest as a cook, the second as a weaver and the youngest as his wife. Jealous of Militrisa’s good fortune the two remaining sister’s plot her downfall aided by Babarikha.

Act I
The Tsar has left for the wars, and in the meantime Tsaritsa Militrisa has given birth to a son. The older sisters send the Tsar a telegram: “she has borne neither a daughter nor a son, neither a mouse nor a frog, but an untamed beast”. A courier brings an answering telegram: "The Tsar commands his boyars, without further delay, the Tsaritsa and her progeny must be placed in a barrel and cast away”. Militrisa and the Tsarevich are cast into the sea to the sounds of the protest and tears of the people.

Act II
A wave has washed the barrel onto an empty beach on the island of Buyan, Militrisa and the Tsreevich, already a young man, climb out of it. Crafting a bow Guidon goes back to the seashore to hunt some game, but suddenly sees a huge kite chasing a swan; taking aim, he shoots an arrow at the kite and kills it. The Swan promises to repay kindness with kindness and then disappears. Next morning they see that a city has magically appeared out of the mist. The residents of the magical city of Ledenets rapturously welcome Guidon and ask him to become their ruler. Guidon longs for his father. He looks sadly at a boat bound for the kingdom of Saltan. The Swan appears from the water and offers to help. She turns the Prince into a bumble-bee so he can catch up with the ship. In the palace at Timutkaran the sad Tsar sits on his thrown. Beside him sit Povarikha, Tkachikha and Babarikha. The Tsar invites sailors to the palace, lays on a feast and asks about the miraculous things they have seen on their journeys around the world. The shipmen tell of the city of Ledenets on a desert island, of a squirrel that nibbles golden nuts, of the thirty-three knights of the sea and of the brave and mighty Prince Guidon who rules the city. The Tsar is surprised and wants to visit the kingdom. Tkachikha and Povarikha anxiously try to dissuade him. Babarikha tells of one miracle not to be found in the city of Ledenets – a Tsarevna of indescribable beauty. Angered by schemes of the conspirators, the bumble-bee stings each of them on the eyebrow. Chaos ensues.

Act III
Guidon cannot forget Babarikha’s story, he dreams of a beautiful Tsaritsa. He calls the Swan for help. The Swan tells him that she herself is that very Tsaritsa he dreamed of. Militrisa gives her blessing to the young couple. The Tsar Saltan’s ship draws up to the island of Buyan and the Tsar and his retinue disembark. The miracles of Ledenets are displayed. The Tsar and the guests are astonished when they see the magical squirrel in its crystal house, the thirty-three knights of the sea and the beautiful Swan-Princess. The Tsar, full of emotion, asks to see the Tsaritsa. Militrisa enters. The Tsar realizes that the Tsareevich Guidon is his son. Tkachikha and Povarikha beg forgiveness from him. Babrikha runs away in fright. Full of joy the Tsar forgives the two envious sisters.