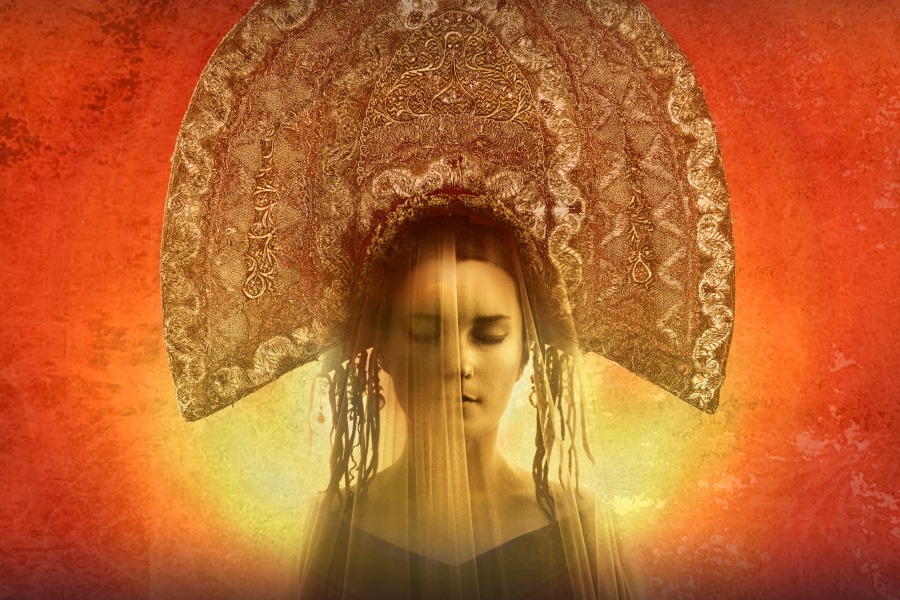 The oprichnik Grigory Gryaznoi is expecting guests whom he has invited with the secret thought of gaining the trust of Ivan Lykov and being introduced to Bomely the German physician as soon as possible. Ivan Lykov is the groom of the beautiful Marfa Sobakina with whom Gryaznoi is in love.

The times when Gryaznoi enjoyed taking any girl by force who took his fancy. Now he is truly in love but Marfa’s father has declined him point-blank; his daughter is promised in marriage to Ivan Lykov who has recently returned from abroad. Gryaznoi doesn’t yet know what he will do but he is determined the marriage will not take place.

The oprichnik guests assemble, led by the mighty Malyuta Skuratov Lykov and Bomely. Singers entertain Gryaznoi’s guests with singing and dancing. When the guests depart Bomely alone remains behind at the host’s request. Gryaznoi asks him for a love-philtre. Lyubasha, Gryaznoi’s lover, overhears their conversation. After Bomely departs she tries to hold on to Gryaznoi and revive his love, but in vain.

An autumn morning. In fear, the people walking in the garden make way for the oprichniks who appear and they discuss the impending inspection of the Tsar’s bride, for which beautiful girls from all over Russia have been brought. Midday. Marfa and her friend Dunyasha Saburova and the drynurse Petrovna are returning home. They are met by several horsemen, one of whom is Ivan the Terrible. Marfa does not recognise the Tsar, though she is frightened by his fixed stare.

In secret, Lyubasha is spying on Marfa and Dunyasha. She is staggered by Marfa’s beauty and realises she cannot compete with her. Lyubasha asks Bomely for some poison to kill her rival. In exchange for the poison Bomely wants to spend the night with Lyubasha. Mad with grief and abandoned by her lover she agrees.

Sobakin is receiving guests at home – Lykov and Grigory Gryaznoi, who has asked insistently to be the groom’s best man. They wait for the girls who are due home at any moment with Dunyasha Saburova’s mother from the Tsar’s inspection of the brides. Domna Saburova enters and hurriedly begins to relate how long the Tsar spoke with her Dunyasha and merely gave Marfa a quick glance. Believing that the Tsar has chosen someone else, Sobakin decides to celebrate his daughter’s engagement to Lykov. As best man, Grigory fills the prospective bride and groom’s glasses with wine and, unnoticed, slips the potion he received from Bomely into the glass intended for Marfa; he is unaware that Lyubasha has substituted the potion with another. In line with custom the glasses must be drained. But the bride doesn’t even manage to put down her empty glass before the boyars appear and declare that the Tsar has chosen Marfa Sobakina for his bride.

Vasily Sobakin is deep in thought: his daughter was unexpectedly and strangely taken ill soon after she was announced as the Tsar’s bride. Gryaznoi appears. In the name of the Tsar he declares that under torture Lykov admitted poisoning Marfa and has been executed. On hearing this terrible news Marfa loses her senses. It seems to her that she is in the garden with her beloved. Turning to Gryaznoi, she calls the oprichnik Vanya, dreams of her marriage to him and remembers being chosen as the Tsar’s bride only as a terrible dream. Grigory cannot bear this heart-rending scene and publicly repents of the evil deed he has committed: it was he who gave Marfa the philtre and slandered his rival! Lyubasha appears. Crying out, she admits that she replaced the love-philtre with poison. Gryaznoi stabs Lyubasha to death. He bids farewell to Marfa and is led away.