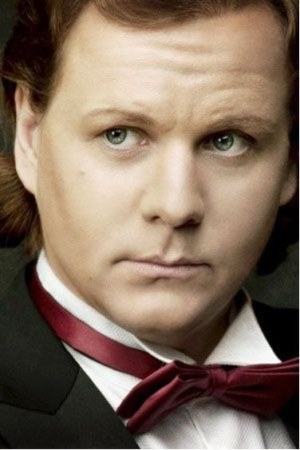 Alexei Markov was born in Vyborg.
In 2001 he joined the Mariinsky Academy of Young Opera Singers.
Soloist with the Mariinsky Opera since 2008. Has regularly appeared at the Mariinsky Theatre since 2006 in the lead baritone repertoire.

Alexei Markov has toured with the Mariinsky Opera to the Deutsche Oper Berlin (Germany), the Lincoln Center and Carnegie Hall (New York), the Barbican (London), the Kennedy Center (Washington) and Suntory Hall (Tokyo) in addition to appearances at festivals in Rotterdam (The Netherlands), Mikkeli (Finland), Eilat (The Red Sea Festival, Israel), Baden-Baden (Germany) and and Edinburgh (Great Britain).

In early 2007 he made his European debuts as Count Tomsky (The Queen of Spades) at the Oper Frankfurt, Iago (Otello) at the Semperoper in Dresden and Renato (Un ballo in maschera) at the Oper Graz.

From 2008–2011 Markov performed the roles of Eugene Onegin at the festival La Coruña (Spain) and in opera houses in Zurich (Switzerland), Lyon (France) and Monte Carlo (Monaco), Grigory Gryaznoi (The Tsar’s Bride) at Carnegie Hall with the New York Symphony, the Count di Luna (Il trovatore) at the Opéra National de Bordeaux (France), Robert (Iolanta) at the Salzburg Festival (Austria) and Scarpia (Tosca) at the Oper Frankfurt am Main, as well as taking part in a recording of Mahler’s Eighth Symphony with the London Symphony Orchestra under Valery Gergiev.

Between 2011 and 2014 Alexei Markov performed the role of Fyodor Poyarok in a new production of the opera The Legend of the Invisible City of Kitezh and the Maiden Fevronia at De Nationale Opera (Amsterdam), the role of Robert in a new production of the opera Iolanta at the Teatro Real in Madrid (Spain); the Duke of Nottingham (Roberto Devereux), Renato (Un ballo in maschera), Enrico Ashton (Lucia di Lammermoor) and Count Tomsky (The Queen of Spades) at the Zurich Opera and the Count di Luna (Il trovatore) at the Bayerische Staatsoper (Munich).

In the 2014–2015 season Alexei Markov made his debut at the San Francisco Opera as Marcello (La Bohème), appeared as Prince Yeletsky in a concert performance of The Queen of Spades at the Gasteig Munich Philharmonic with the Bayerische Rundfunk Symphony Orchestra and Chorus under the baton of Mariss Jansons and performed the role of Giorgio Germont (La traviata) at the Bayerische Staatsoper. At the Metropolitan Opera he appeared as Renato (Un ballo in maschera), Robert (Iolanta) and Giorgio Germont (La traviata). Also that season Alexei Markov performed the role of Chorèbe (Les Troyens) at the Edinburgh Festival; the singer also performed that role and the role of Prince Yeletsky in a new production of The Queen of Spades at the International Music Festival at the Festspielhaus in Baden-Baden during a tour by the Mariinsky Theatre conducted by Valery Gergiev.

In March 2015 Alexei Markov and the Smolny Cathedral Chamber Chorus under the baton of Vladimir Begletsov presented the programme A Russian Concert consisting of Russian religious music and folk songs at the Concert Hall of the Mariinsky Theatre.