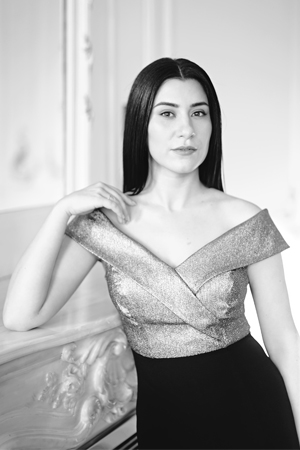 Angelina Akhmedova was born in Tashkent (Uzbekistan). She graduated from the State Conservatory of Uzbekistan. While a fourth-year student, she became a trainee at the Navoi Theater. In master classes she has worked with Renato Bruson, Tamara Novichenko, Katerina Beranova and Larisa Gergieva. Prize-winner at the Bella Voce International Vocal Competition in Moscow (4th prize, 2012) and the Rachmaninov International Vocal Competition in Rostov-on-Don (1st prize, 2013).

In 2017 she became a fellow of the Atkins Young Artists Program at the Mariinsky Theatre.

Angelina made her Mariinsky Theatre debut in 2018, appearing as Nannetta in the premiere of a new production of Falstaff.