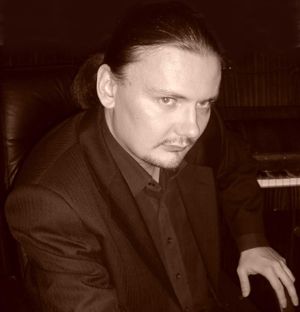 Pavel Smelkov graduated from the St Petersburg State Rimsky-Korsakov Conservatoire in opera and symphony music conducting (class of Professors Ilya Musin and Mikhail Kukushkin) and composition (class of Professor Alexander Mnatsakanian). In 1999 he founded the Baltic Youth Chamber Orchestra and for fifteen years was its Artistic Director and Conductor.

Since 2000 Pavel Smelkov has worked at the Mariinsky Theatre. The conductor has toured with the company to France, Finland, Austria, Germany, Israel and the USA. His repertoire includes the operas Idomeneo, re di Creta, Don Giovanni, Attila, Rigoletto, Don Carlo, Otello, Falstaff, Die Frau ohne Schatten, A Midsummer Night’s Dream, The Turn of the Screw, Prince Igor, Boris Godunov, Sorochintsy Fair, The Demon, The Oprichnik, Eugene Onegin, Mazepa, The Enchantress, The Queen of Spades, Iolanta, The Maid of Pskov, The Legend of the Invisible City of Kitezh and the Maiden Fevronia, Aleko, The Miserly Knight, The Gambler, Betrothal in a Monastery, Semyon Kotko, War and Peace, The Nose, The Gamblers, Dead Souls, The Enchanted Wanderer, The Brothers Karamazov and The Station Guard and the ballets Ondine and The Nutckacker as well as George Frederick Handel’s oratorio The Messiah and Ludwig van Beethoven’s Ninth Symphony. The Mariinsky Theatre’s performance of The Turn of the Screw, performed in Moscow in 2007 under the baton of Pavel Smelkov, was awarded a Golden Mask, Russia’s most prestigious theatre prize.

Has appeared as a conductor in the final rounds of the Tchaikovsky International Competition in 2011 (with the Svetlanov State Academic Symphony Orchestra) and 2015 (with the Mariinsky Orchestra).

Has composed two string quartets, a piano concerto, a piano sonata, a flute and piano sonata, romances and other works as well as over one hundred orchestrations of Russian and western classical music that have been performed by the world’s great orchestras and theatres. Commissioned by the Metropolitan Opera for a production in the 2013-2014 season, Pavel Smelkov orchestrated highlights of Alexander Borodin’s opera Prince Igor that are absent from the traditional version. Cesare Pugni’s ballet Ondine is also performed at the Mariinsky Theatre in Smelkov’s new orchestration.

Since January 2016 Pavel Smelkov has been Principal Conductor of the Primorsky Stage of the Mariinsky Theatre in Vladivostok.