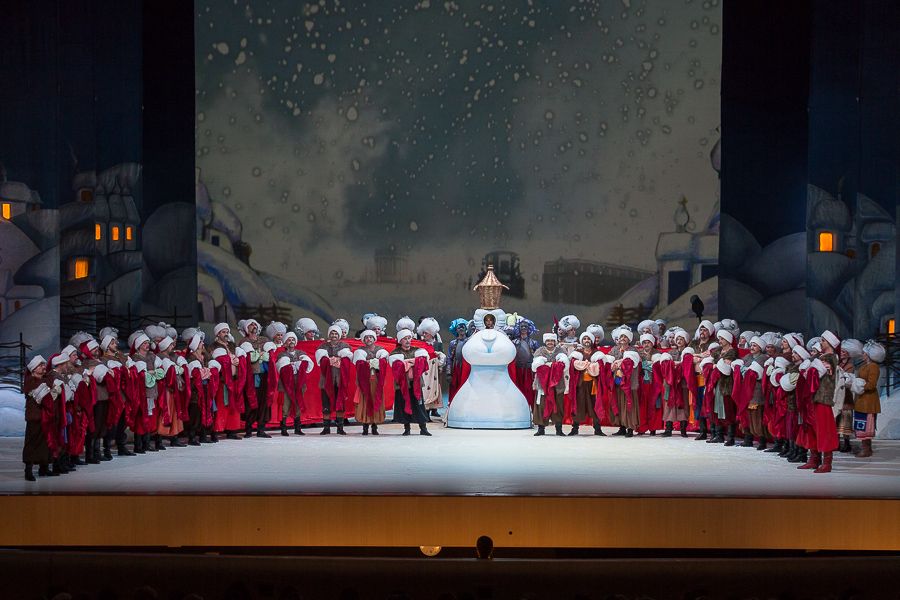 Late one Christmas Eve, the beekeeper Rudy Panko invites the audience to a "little party" where the lads and lasses will tell a story "about all sorts and everything!". The Dikanka villagers begin their story... On the night before Christmas the witch Solokha is beginning to perform the ancient traditional rituals. At that moment, her companion the Devil appears. He is furious with her son Vakula for mocking him – he has "recently daubed the church vestibule for a laugh, as if a Devil could be chased away by wattle and wood." To get back at him, the Devil persuades Solokha to steal the moon and call up a blizzard. When it gets dark, Chub will stay home by the stove, and Vakula will be unable to visit his daughter, the beautiful Oksana. Solokha agrees. She is more fond of Chub – a wealthy widower – than of any of the other Dikanka cossacks, and she is happy to get on his good side. The Devil and Solokha call up a blizzard and steal the moon. Panas, in celebratory mood, is thrown out of the tavern by the landlord, and decides to continue his Christmas Eve at Chub's. Chub, however, has already left his house and talks Panas into going with him to the Sexton's for Christmas pudding. He promises that there will be excellent saffron moonshine. The blizzard gets stronger, and blows Panas and Chub off the road.

Vakula is also not abed. He is wandering indecisively around Chub's house: How can he find out if the proud Oksana loves him?

Lost in the dark, Panas returns to the tavern, while Chub, lost in the dark and unable to find the Sexton's house, heads home. However, he bumps into Vakula outside his house: "No, it's not my house. The smith wouldn't be wandering around there", he thinks, and sets off to call on Solokha. Vakula, finally throwing off his doubts, decides to have it out with Oksana. The blizzard stops.

Oksana is preening in front of the mirror, admiring her reflection. Vakula enters unnoticed and gazes with adoration on her beauty. But it is far from easy to win her heart. She teases Vakula, pretending that she is bored with him and is waiting for her girlfriends to go wassailing, where there will be boys who "will tell some wonderful stories". Here they are, and one of her friends, Odarka, is wearing new slippers. Oksana whines that nobody will give her a present like that. When Vakula says that he is ready to get her any slippers she could possibly desire, Oksana promises in front of everyone that "if he gets hold of the slippers that the mother Tsaritsa herself wears, then I'll marry him."

After the freezing cold, Solokha and the Devil warm up inside with songs and dances. Suddenly, there is a loud knock on the door. Solokha barely has time to hide the Devil with a sack when in walks the Village Head. He was also invited to Christmas Pudding with the Sexton, but seeing the light in Solokha's house, he has decided to pass the evening with her. He only has time to drink a cup of pepper vodka when there comes another knock on the door. Solokha hides the village head inside another sack, and opens the door to the Sexton. Rather than wait for his guests to brave the blizzard, the Sexton has decided he would prefer to see Solokha. But his wooing is also cut short by another loud knock on the door, this time from Chub. Hiding the sexton in the last empty sack, Solokha welcomes her favoured guest coquettishly. However, Vakula comes home unexpectedly, and the seriously worried Solokha is forced to hide Chub in the sack that already contains the Sexton. Vakula wants to take the sacks out of the house, seeing as "tomorrow is a holiday". But the sacks turn out to be very heavy. The stubborn smith manages to hoist them on his back nonetheless, and he heads for the smithy.

The boys and girls are celebrating the Holy Night. All around there are games, jokes, and masked faces. The drunken Panas disports himself, and Oksana frolics. When she sees Vakula, she says again to him: "Get those slippers, smith, and I will marry you!" But Vakula wants the proud maiden to stop tormenting him, and he decides to leave the village. Everyone becomes concerned lest the smith harm himself or even kill himself in his grief. The Woman With Ordinary Nose and the Woman With Purple Nose run to spread the gossip throughout the village. One tells that the smith has hanged himself, the other that he has thrown himself under the ice. Oksana, too, is worried - what if his grief should lead him to love another, and to call her the most beautiful in the world? Then she notices the sacks that Vakula has left behind. The youths untie them, and Solokha's confused admirers emerge one by one - Chub, the Village Head, and the Sexton. "Ah, Solokha. The woman's a trickster! The woman's a devil!" the crowd shouts out with uncontrollable laughter.

Vakula, taking with him only one small sack, has gone to seek advice from the old sorcerer Patsyuk. Rumour has it that he knows all the devils. The smith asks Patsyuk to show him how to find the Devil, the only one who can help with his grief. "You won't have to go far when you have the Devil on your shoulders," Patsyuk answers serenely. Astonished, Vakula watches as the Devil climbs out of his sack and offers to help him on the condition that he sell his soul. Pretending to be willing to sign his promise in blood, Vakula suddenly grabs the Devil by the tail and pulls out a cross. Under the threat of the sign of the cross, the Devil agrees to do whatever the smith asks of him. Vakula orders the Devil to take him to the Tsaritsa, and they set off.

In the air, a violin play Christmas Eve. The planets fly through the sky. The sorcerers, nymphs, and witches of Kiev are gathering for a Sabbath. Among them are Patsyuk and Solokha. They create a demonic wassail. When they see Vakula with the Devil, the try to block his path, but the smith holds tightly to his cross.

A fanfare sounds, and the boys and girls scuttle and scamper about, rushing to get ready to present St Petersburg and the Tsaritsa herself. The ladies of the court dance a shapely Polonaise with the Zaporozhian Cossacks. The Tsaritsa appears, and Vakula falls at her feat. "If only my lass could wear a pair of slippers like those!" The Tsaritsa is charmed by the simple honesty of the smith, and she gives him her finest slippers.

Christmas Eve is coming to an end. Soon the sun will be up. The unclean forces hurry to hide from the dawn. Vakula is carried back by the Devil, in his hands is his precious package for Oksana. Daylight comes and the maidens enter, rolling a wheel – the symbol of the sun, of the earth's fertility, of light, and of life. Bells ring out – Christmas and Love have come to the world.

Oksana is sad. She has already realised that no boy will love her as well as Vakula. Meanwhile, the two Women argue in front of Chub as to whether the smith has hanged himself or drowned himself.

Their argument turns to a fight, and the Women run away. Chub also drags himself off home, leaving Oksana alone. She does not notice Vakula, who has at last heard that she loved him. The beautiful maiden no longer needs any slippers, she would be happy to marry the smith without them. Chub agrees with this – he cannot forget the faithless Solokha, and the presents Vakula has brought from Petersburg – a coloured belt and a sheepskin hat – are particularly fine. Chub calls together the village to tell them there will soon be a wedding. Everyone rejoices at Vakula's return.

Then Vakula presents to the audience the beekeeper Rudy Panko. He is the one, with his "golden quill", who has written this fantastic story about Christmas Eve.

The plot of Gogol’s Christmas Eve enjoyed incredible popularity: the famous poet Polonsky used this short story to write a libretto and the Director of Russian Imperial Theatres organized a contest, commissioning to write an opera based on this script. Rimsky-Korsakov did not take part in that contest, however, historically, it was he who won it: the Korsakov’s Christmas Eve has become the longest-living and most popular repertoire work on the theme. However, the composer did not use Polonsky’s text as he decided to stick to the original Gogol’s version and achieved wonderful results working on the literary material himself. He adapted and presented Gogol’s novel in an extremely delicate way, while using such sparkling humour and such a beautiful and subtle irony, such vivid character types that sometimes one can’t help dissolving into tears of laughter.
As the new opera had been meant to complete the cycle of ceremonial operas, Rimsky-Korsakov further enriched the novel’s principal storylines with new scenes and characters. It is possible that his previous operas The Snow Maiden, May Night and Mlada had anticipated the appearance of new characters from semi-pagan folk beliefs which remained in Christian Christmas Eve festivities: the Devil (Chert), a Witch (Solokha) and a Sorcerer (Patsyuk), Kolyada and Ovsen. Priceless lyrical operatic scores and arias of the principle characters are accompanied by equally beautiful mass ceremonial scenes, which give the opera its peculiar flavour, charm and uniqueness.
Rimsky-Korsakov conveyed through music everything that Gogol had expressed by literary means. That is why opera Christmas Eve is, in the highest and best sense of this word, theatrical: mischievous and eventful, it is real in spite of all its relativity and grotesque. The forces of evil are also presented in a very merry and “gothicism-free” way: Solokha the Witch happens to have a wonderful son who conquers the Devil by force of the Life-Giving Cross. The performance, which was initially created for the Concert Hall and then brought over to the Historic Stage of the Mariinsky Theatre, is regarded as a definite hit premiere. Its staging, sets and lighting are sound, colourful and impress with their spectacularity. The production also has taken advantage of absolutely all theatrical opportunities: a snowstorm, stars playing blindman’s buff, a fantastic flight create a sense of presence, engaging the audience in the events happening onstage. All artists involved in the performance sing, act and dance with great pleasure, energizing the audience by their “drive”. This is a production for all the family — one of those that inspire a real love for opera.