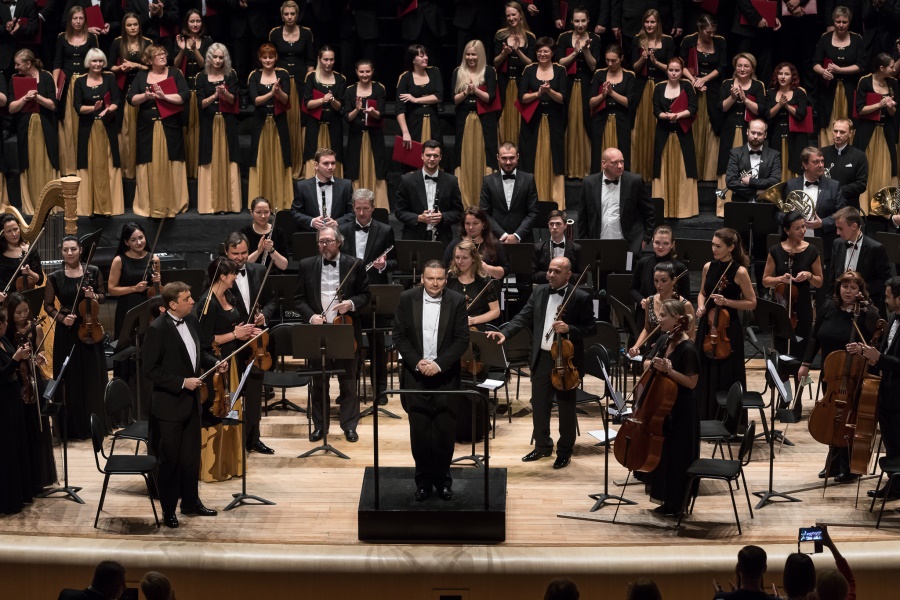 PROGRAMME:
PART I
Alexander Borodin
Allegro (Movement I) from the Symphony No. 2 in B minor (“Heroic symphony”)
Aria of Prince Igor from the opera Prince Igor

Sergei Prokofiev
Aria of Kutuzov from the opera War and Peace

PART II
Dmitri Shostakovich
Allegretto (Movement I) from the Symphony No. 7 (Leningrad)

Alexander Smelkov
In God I Trust, Cantata for two soloists, choir and orchestra. Lyrics by А. Zhigulin and Psalm 90

Musicians of the Primorsky Stage of the Mariinsky Theatre dedicate a Gala Concert with a conceptual program “Heroic Symphony” to the Great Victory Day.

In Part I the audience will enjoy a historic journey into the days of notable battles embodied in music. Movement I from Alexander Borodin’s Symphony No. 2 that was called “Heroic Symphony” by reviewers for its true Russian spirit and epic character images, and the well-known Aria of Prince Igor (from Alexander Borodin’s opera of the same name with libretto adapted by the composer from the ancient Russian epic The Tale of Igor’s Campaign), performed by the hero before his escape from Polovtsian Khan captivity, will give tone to the whole evening.

The Orchestra depicts tragic events in Nikolai Rimsky-Korsakov’s symphonic picture The Battle of Kerzhenets. This composition becomes one of the high points of the opera The Legend of the Invisible City of Kitezh and the Maiden Fevroniya. Beginning with a gallop rhythm, the composer includes step by step the themes of invading Tatars and the Kitezh battalion fighting in mortal combat. The end of the battle is sad, and in finale the melody of the ancient Russian song “About the Tatar Capture” sounds quietly.

The following compositions of the program are dedicated to the unforgettable victories that bring glory to the Russian soldiers: Battle on the Ice by Sergei Prokofiev from Sergei Eisenstein’s 1938 cult film Alexander Nevsky, The Battle of Poltava from Pyotr Tchaikovsky’s opera Mazeppa. The patriotic Aria of Kutuzov from Sergei Prokofiev’s opera War and Peace sounds during Kutuzov’s taking the life-changing decision to retreat and sacrifice Moscow to Napoleon's army in 1812.

Part II is dedicated to the music directly connected with events of the Great Patriotic War. It begins with the “invasion” theme of Allegretto from the Symphony No. 7 by Dmitri Shostakovich, composed in 1941 in the city of Leningrad, while it was under siege by Nazi German forces. Alexander Smelkov, a contemporary Saint Petersburg composer, represents his cantata In God I Trust (2020) dedicated to the 75th anniversary of Victory. The Gala Concert ends with war songs by Alexander Alexandrov, Matvey Blanter and David Tukhmanov, which have reflected the spirit of those events and become Russian music symbols.