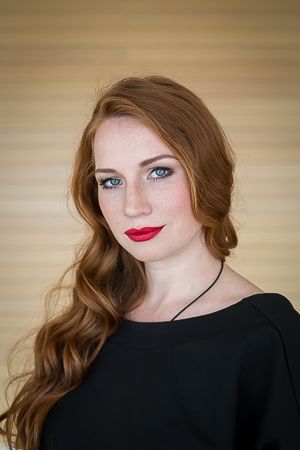 The singer greatly succeeded as Carmen. She was a true gypsy girl – highly spirited, sensuous, with a powerful voice. Everything she said was understandable with no interpretation.

Having completed her studies at the Galina Vishnevskaya Opera Center, Tatiana Makarchuk was singularly good as Olga. By her sounding and image, she was the very country gamine we used to see in classical performances.

Tatiana Makarchuk was born in the town of Bolshoi Kamen in the Primorsky Region. In 2008 she graduated from the Gnessin State Musical College where she studied with Lyudmila Ivanova.

In 2013 she finished her studies at the Centre for Opera Singing. In the same year she graduated with a Red Diploma from the Russian Academy of Music where she studied with Ruzanna Lisitsian.

In 2012 she was accepted by the company of the Natalya Sats Musical Theatre where she made her debut in the role of Carmen from the opera of the same name by Georges Bizet. She performed the same part in the Bord Gáis Energy Theatre (Dublin, 2013). She was a participant of the Competizion dell’ Opera (Linz, 2013).

In February 2018 she participated in a master class by Maria Guleghina.

In March 2018, she made her successful debut as Carmen from the opera of the same name by Georges Bizet at the Mariinsky-2 (St Petersburg).