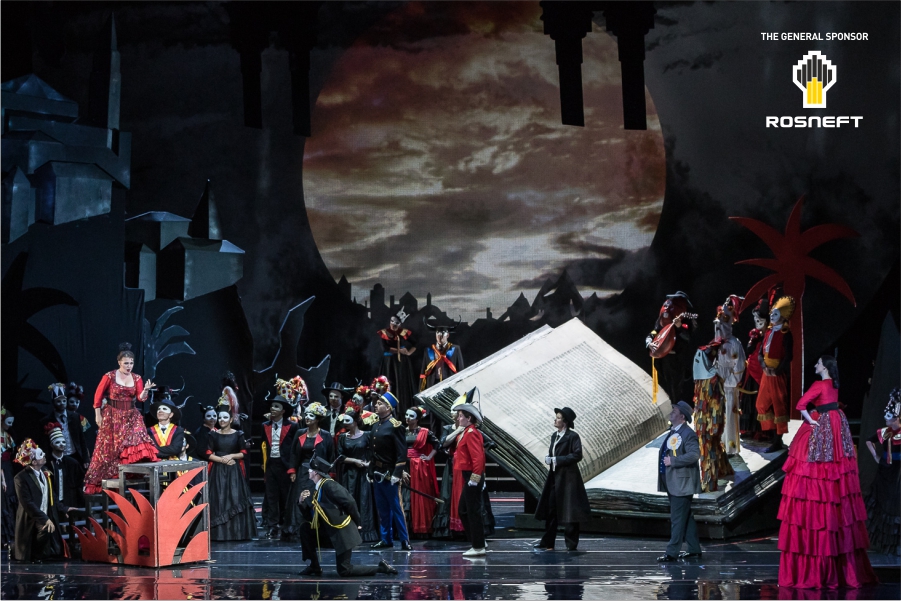 Ensemble of soloists of the Mariinsky Academy of Young Opera Singers

Act I
On a square in a small town in Spain, the people are merrymaking and dancing. Visitors at the tavern praise the Beautiful Dulcinée while four admirers – Pedro, Garcias, Rodriguez and Juan – gather beneath her balcony. However, the Beautiful Dulcinée, despite the general adoration, feels some strange dissatisfaction – she longs to meet a true knight.
Laughter and merry voices can be heard – it is the crowd greeting Don Quichotte and Sancho Pança. Juan makes fun of the knight’s rueful countenance and his veneration for the Beautiful Dulcinée. Rodriguez is enchanted by the beauty of soul and the bravery with which the former protects widows and orphans. Don Quichotte is unruffled. The knight orders his armour-bearer Sancho Pança to give money to the poor and the crippled. The crowd disperses. Sancho heads for the tavern. Night falls.
The admiring knight sings Dulcinée a serenade. Jealous, Juan interrupts him and challenges him to a duel. Dulcinée appears and prevents the fight taking place. Don Quichotte declares to Dulcinée that henceforth he will serve her. She, laughing, asks him for proof of his devotion and to reclaim a necklace stolen from her by bandits. Don Quichotte sets out without delay.

Act II
The morning dawn sees Don Quichotte and Sancho on their way. In the morning mist some windmills can barely be made out. Don Quichotte selects rhythms for a song in honour of Dulcinée. Sancho is not pleased with this extravagant campaign, certain that the beautiful woman was laughing at them. Filled with hatred of his master, Sancho bursts into a furious tirade directed against every woman on Earth. The mist dispels and Don Quichotte takes the windmills to be giants trying to stop him. To Sancho’s terror, he starts battling against them.

Act III
Don Quichotte pursues the bandits. When he stops to rest – standing up in his armour as befitting a knight – the bandits appear. Don Quichotte makes Sancho stand back and makes war with the bandits but is defeated and tied up. The bandits laugh at him and are ready to hang him. But Don Quichotte’s ‘‘deathbed’’ prayer and his eloquent story of the mission of a travelling knight are so touching that the stony hearts of the inveterate bandits soften, and their leader not only frees Don Quichotte but also returns Dulcinée’s necklace. Don Quichotte blesses the bandits and sets off for home, victorious.

Act IV
A party is underway in Dulcinée’s garden. Yet the beauty has become bored with her admirers. She thinks of how fleeting love is. But then her mood changes and she sings a song praising the joys of short hours of true passion.
When the guests move off to feast in the dining room, Sancho Pança appears and pompously announces Don Quichotte’s arrival. Don Quichotte, sensing that his adventures are approaching an end, promises Sancho an island or a castle as a reward for his loyal service. In the presence of the guests as they come back to the garden, he returns the necklace to Dulcinée and asks her hand in marriage. Dulcinée is delighted at the necklace but turns down the offer of his hand and heart. Sending her guests away, she consoles the despairing Don Quichotte by telling him she feels dedication and tenderness for him but is unworthy of his love.
The guests return once more and laugh at the poor knight. But then Sancho comes to the defence of his master and leads him away, crushed by Dulcinée’s rejection.

Act V
On a mountain path Don Quichotte is resting, leaning against a tree trunk. Sancho tries to console him as best he can. Feeling the approach of death, the old knight remembers his promise to reward Sancho with an island – an island of dreams.
Thinking of Dulcinée, Don Quichotte dies, reconciled and at peace.
Sancho Pança weeps inconsolably.

Running time 2 hours 30 minutes
The performance has one interval