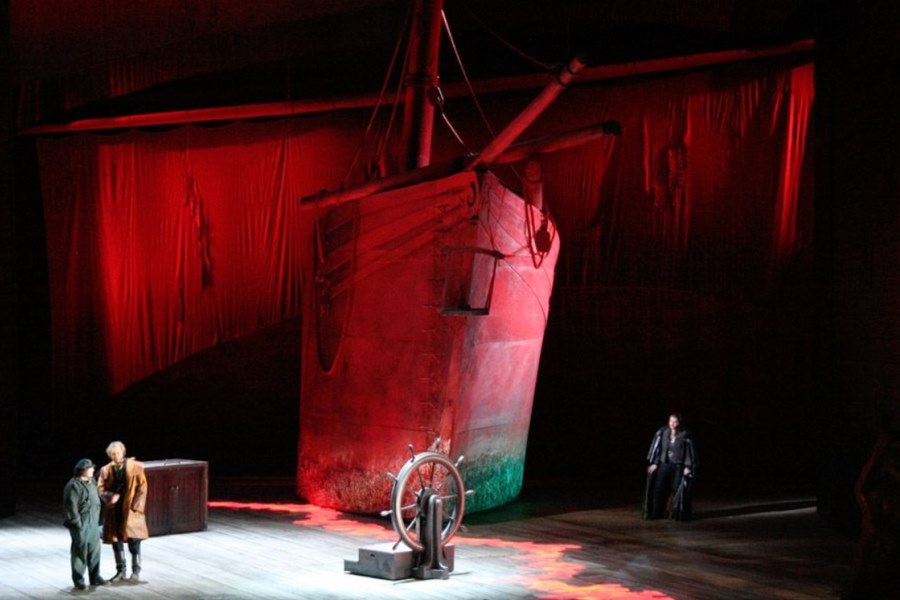 Music by Richard Wagner
Libretto by the composer

Act I
Driven by a violent storm to take shelter, Daland anchors his ship in the bay of Sandwike, some miles from his home port. Leaving his Steersman on watch, Daland and his crew go to rest. The Steersman, to keep himself awake, sings a ballad. But eventually he falls asleep. A strange ship appears. Its captain, the legendary Flying Dutchman, sings of the curse upon him. Once he swore he would try to round a cape even if it took until eternity; the devil took him at his word: his rate is now to sail unceasingly until the Day of Judgment unless he can find a woman "faithful unto death". Every seven years he may come ashore to search for one, and the time has now come again.
Daland returns to the deck, sees the strange ship and rouses the Steersman. They hail it but are met with silence. Daland meets the Dutchman, who tells him of his wanderings and asks for Daland´s friendship and hospitality. In return he can offer untold riches. When the Dutchman discovers Daland has a daughter he asks to marry her. Daland is delighted. The Dutchman wonders whether this woman will be his saviour. A southerly wind has sprung up and Daland´s crew prepare to set sail, the Dutchman promising to follow.

Act II
Senta´s friends are singing as they spin. Senta takes no part in the work, preferring to gaze at a picture of the Flying Dutchman. Mary reproaches her for idleness and the women mock her for her obsession with the Dutchman, particularly when she has a lover, Erik. Senta asks Mary to sing the ballad of the Dutchman; she refuses, so Senta sings it herself. The women are moved by the story. Senta declares that she will be the woman to bring salvation to the doomed Dutchman. Everyone is horrified, including Erik, who overheard her. He tells them Daland´s ship is returning. Mary says the picture will be thrown out when Daland comes home.
The women leave to prepare for the sailors´ arrival.
Erik begs Senta to be faithful to him but she is anxious to go and meet her father. Erik wishes she would forget the picture and the ballad. Senta is unmoved by his self-pity; the Dutchman´s sorrow cuts through her. Erik dreamt of a strange ship: Senta´s father and a stranger approached and Erik recognized the stranger as the Dutchman; Senta embraced him and sailed away with him. Senta is now convinced that the Dutchman is seeking her and it is her fate to save him. Erik leaves in despair.
Daland arrives with the Dutchman. He is puzzled that his daughter has not greeted him in the usual way. She is transfixed by the visitor. Daland asks her to offer him hospitality and urges her to marry him. He leaves the two alone, commending their respective virtues. The Dutchman and Senta are entranced, each contemplating the fulfilment of their dreams. Senta, overwhelmed by his suffering, saying she will be his salvation.
The Dutchman warns her of the sacrifices she must make if she is to be one to him for ever. But she says she will be true until death.
Daland returns. He is overjoyed that there is now an engagement to celebrate.

Act III
The sailors are having a party. The women arrive with food and drink and take some to the stranger´s ship. But there is no response to their calls. The sailors continue their festivities. Suddenly the Dutchman´s crew come to life. The Norwegians flee in terror. Senta appears with Erik, who is broken-hearted and reproachful. He pleads with her to remember her promises to him. The Dutchman is listening, and believes Senta unfaithful to him. He will return to the sea, never return to land, and forego his salvation. Senta begs him to stay but Erik wants her to let the Dutchman go. He tells her he will not let her fall victim to his curse, as have countless women in the раst: all have sworn fidelity to him and broken their oaths; eternal damnation is their reward.
Senta will be saved for she has not sworn fidelity to him before God. She maintains she has always known both his identity and destiny. Erik calls for help. The Dutchman reveals his identity, boards his ship end leaves. In есstasy Senta calls out to him and throws herself in to the sea The ship founders.
The Dutchman is set free.

A popular story about a damned vessel of the ghostly sailor doomed to wander the seas for ever, had had been circulating among Dutch sailors since the 16th century. The young Wagner was inspired to compose a marine opera by Heyne’s retelling of a folk tale written as a romantic fate drama. A certain role in evoking the composer’s interest in this plot was also played by an episode in his autobiography: during a sea voyage the ship with Wagner on board was caught in a storm and had to seek refuge in Norway – the country where the action of Der fliegende Holländer takes place. The idea of the opera, composed just in seven days, was defined by the author as “the longing for peace from the storms of life”. In his work, the theme of damnation is supplemented by the theme of redemption, and the Flying Dutchman’s story acquires a happy ending: the love of the Norwegian sailor’s daughter Senta relieves the ill-fated Wanderer from the torture by immortality. The opera’s music follows the style of its emotional narrative, enthralling the listeners with its colourful portraits of the main characters and expressive scenes, the most successful of which are the boisterous Sailor’s Chorus and the Spinning Song. The world premiere of Der fliegende Holländer took place in Dresden in 1843 and was conducted by Wagner himself. At the Mariinsky Theatre, the opera was first staged in 1898 and featured an international cast conducted by Bernhard Stavenhagen. 1910 saw a new stage version of the Dutchman with sets by pre-eminent theatre designer Konstantin Korovin and conducted by Albert Coates. In 1998, Maestro Gergiev initiated the revival of Der fliegende Holländer directed by Temur Chkheidze (set designers – George Tsypin and Eugene Monakhov) on the Mariinsky stage to celebrate the centenary of the opera’s first performance on the Mariinsky stage. The current production, which premiered under the baton of Valery Gergiev as part of the 2008 Baden-Baden Festival, featured a team of celebrated British theatre masters headed by director Ian Judge. The production’s scenography centers around a gigantic – house-sized – ship of the Wanderer Sailor, the appearances of which mark turning points in the drama.