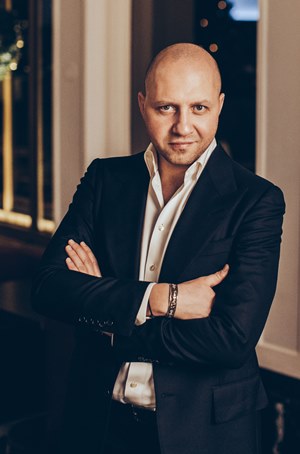 The solo was performed by Mikhail Petrenko, a young bass who performs both character roles and noble heroes with equal success. His bubbling artistry and the velvety tone of his voice were impressive: it was breathtakingly convincing – theatre of one performer supported by the utterly excellent sound of the orchestra.

Petrenko reminded us of why we love Russian basses. When that rich, reverberating tone rises from the depths, then pours forth to fill the auditorium, it is difficult not to feel a certain thrill.

... The star of the evening was Mikhail Petrenko as Sparafucile, the knife-wielding assassin. Here he was evil incarnate, with his gleaming bass voice seemingly rising out of the depths of his soul...

Even more impressive was Mikhail Petrenko, the possessor of a magnificent bass voice, but first and foremost he was restrained and responsive to the text, singing the Confutatis with lyrical warmth...

Mikhail Petrenko was born in St Petersburg and graduated from the St Petersburg State Rimsky-Korsakov Conservatoire in the class of Professor Minzhilkiev. While still a student he was invited to join the Mariinsky Academy of young Singers. He made his debut at the Mariinsky Theatre in Prokofiev’s opera Semyon Kotko, and since 1998 has been a soloist with the Opera Company.

Mikhail Petrenko has become a prize-winner at such prestigious international vocal competitions as Operalia, the Rimsky-Korsakov Competition, the Elena Obraztsova Competition, he also was awarded a diploma at the Maria Callas Competition Nuove voci per Verdi in Parma.

The start of Mikhail Petrenko’s international career came with his debut at the Berliner Staatsoper as Hunding (Die Walküre) in 2004 under the baton of Daniel Barenboim. Since then, Mikhail Petrenko has been invited to the world’s leading opera houses and prestigious opera festivals.

Engagements this season and beyond include Bluebeard’s Castle with the Leipzig Gewandhaus Orchestra and Orchestre Philharmonique Royal de Liège, Elektra and Il Barbiere di Siviglia for the Metropolitan Opera, Ivan the Terrible with the Chicago Symphony Orchestra under Maestro Muti and Nabucco at Teatro alla Scala.

His many recordings include Die Walküre conducted by Gergiev released on the Mariinsky Label and Gounod’s Romeo et Juliette conducted by Yannick Nezet-Seguin released on Deutsche Grammophon. He added a recording of Rachmaninov’s The Bells with the Berliner Philarmoniker to his discography conducted by Sir Simon Rattle, released on EMI and also features as Leporello in the film version of Don Giovanni, (Kasper Holten’s Juan).

In November 2011, Mikhail Petrenko performed the role of Ruslan (Ruslan and Lyudmila) at the reopening of Moscow’s historical Bolshoi Theatre.

For more information, please go to the www.mikhailpetrenko.org