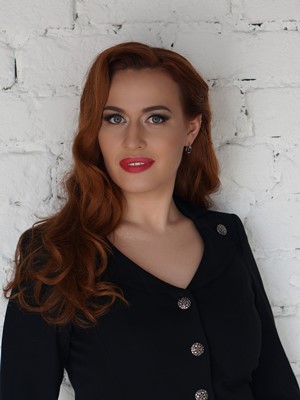 The young singer possesses beautiful, imbued with hot spiciness, ample and dense voice with a good range. Her delivery captivated the audience, having fully conveyed the character’s inherent colourfull mysteriousness, allure, eroticism and demonism – all that the production had been lacking in.

This premiere’s phenomenon is the young soprano Elena Stikhina even despite the fact that director has virtually deprived her Solome of one of the key scenes (...). The power and the beauty of her voice (...) conveys the tragedy of the girl – half-a-child overwhelmed by her forbidden passion for the Prophet Jochanaan to such an extent, it gives shivers.

With this performance, Elena Stikhina became a lucky strike and a great success. The spick-and span, never-before-seen star rarely pinches into the operatic world. The role of Salome requires the extraordinary stamina, stability and strength of a dramatic soprano; Stikhina’s voice has all these qualities. Her tone color was silken and powerful – an ideal combination for the part of Salome, a child-woman conceiving a forbidden passion for Jochanaan.

Having appeared as Micaëla, Elena Stikhina struck the audience with her delicate phrasing, vocal power and variety of overtones.

Since 2014 she has been a soloist of the State Primorsk Opera and Ballet Theatre (now the Primorsky Stage of the Mariinsky Theatre).

Elena made her Mariinsky Theatre debut as Salome at the premiere of new production in  February 2017, immediately thereafter she became a member of the Mariinsky Opera Company.

For the role of Salome she was awarded the Onegin Russian opera prize and St Petersburg's most prestigious theatre prize the Golden Sofit.

Since the Operalia competition in 2016 the singer has been a much sought-after guest performer at opera houses in Europe and the USA. She has made her debuts with the Finnish National Opera and the Opéra National de Paris (Tatiana in Eugene Onegin), the Boston Lyric Opera (Tosca in the eponymous opera), the Staatsoper Unter den Linden in Berlin (Mimì in La Bohème), the Deutsche Oper in Berlin (Leonora in Il trovatore), the Bayerische Staatsoper (Senta in Der Fliegende Holländer) and the Metropolitan Opera (Sister Angelica in Suor Angelica) among other famed theatres.

In the summer of 2019 Elena Stikhina made her debut at the Salzburg Festival, singing the title role in Cherubini’s opera Médée.

The singer’s most recent engagements include appearances at the Semperoper in Dresden (Leonora in La forza del destino), De Nationale Opera in The Netherlands (Cio-Cio-san in Madama Butterfly), the Opéra National de Paris (La forza del destino and Prince Igor) and the Grand Théâtre de Genève (the title role in Aida).

Repertoire also includes: the Countess (Le nozze di Figaro), Violetta (La traviata), Micaëla (Carmen), Zemfira (Aleko), Olga (The Story of a Real Man) and the title roles in Iolanta and among others.