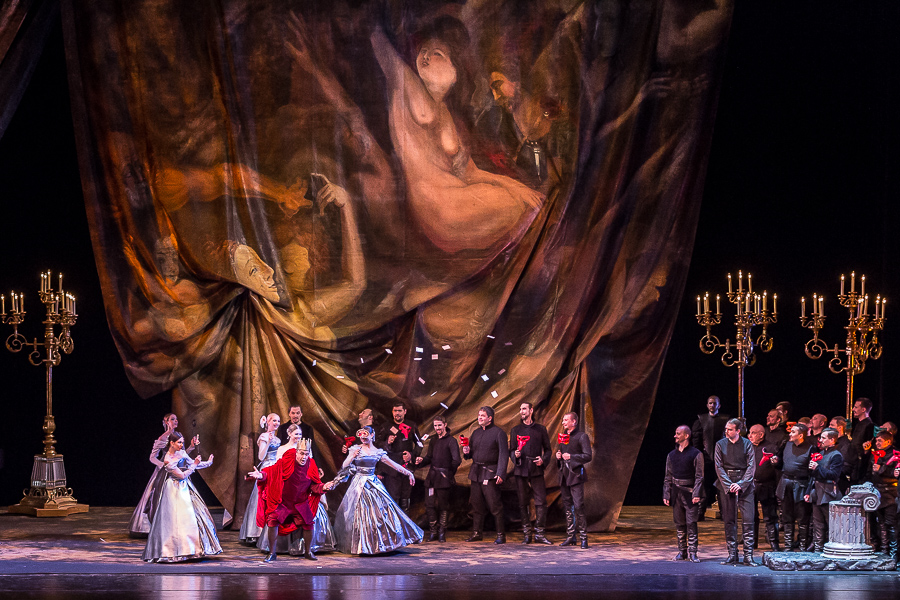 Act I
At a ball in the ducal sumptuous palace, the profligate Duke boasts to his courtier Borca of his amorous conquests: soon he is going to possess the beautiful stranger he often sees in church. Right there at the ball, the nobleman starts making advances to the Countess Ceprano. His jester Rigoletto mocks the Countess’ husband. The courtiers plot revenge on the buffoon for his sharp tongue, one of them, Marullo, informs them that Rigoletto is keeping a mistress at his place. The festivities are interrupted by the sudden appearance of the Count Monterone, who has come to avenge his daughter's honour, but he is viciously ridiculed by Rigoletto. Monterone calls down a curse upon both the Duke and his servant.

On his way home, in a dark street, Rigoletto is accosted by the assassin Sparafucile, who offers him his services. Rigoletto is preoccupied with his thoughts about the curse. He is thinking about his contemptible status and his hatred for the courtiers flares up. At home he is greeted by his daughter, who is everything to him after his wife’s death. They talk tenderly. Shielded from the world by her father’s care, she lives in solitude with her servant Giovanna and only leaves home to go to church. Saying farewell, Rigoletto instructs Giovanna to keep an eye on the girl. The Duke is watching them from his hiding place. He bribes the servant. Pretending to be a poor student, Gualtier Maldè, the Duke declares his love for Gilda. They are interrupted by the noise outside, the “student” has to go. Alone once again, the girl tenderly repeats the name of her mysterious admirer.

In the dark of the night, the masked courtiers have gathered outside Rigoletto’s house, intending to abduct “his mistress”. When they encounter the jester, the plotters convince him that they are going to the Count Ceprano’s house to kidnap his wife. They trick the hunchback into assisting them in their scheme. Rigoletto is duped into wearing a blindfold and, failing to recognize whose house it is in the darkness, helps them to catch his own daughter. Only when he hears Gilda’s distant screams, does he realize what has happened.

Act II
In his palace, the Duke is distraught over the disappearance of Gilda. When he returned to her house, he did not find her there. The courtiers tell him about their midnight adventure. The delighted Duke rushes to Gilda.

Rigoletto appears, concealing his despair under his usual mask of a jester. However, when his anger fades away, he pleads with the courtiers for his daughter’s return, Gilda comes out to her father in tears. Monterone is led by on his way to the dungeon. He laments that the Duke is still untouched by his curse. The hunchman swears vengeance against the nobleman, as Gilda pleads for mercy, confessing that she loves the Duke.

Act III
A tavern on the river bank. Rigoletto has brought his daughter, who is still in love with the Duke, to show her how he amuse himself with another woman. The Duke flirts with Sparafucile’s sister Maddalena. Gilda is in despair. Rigoletto comforts her, promising to revenge her. He sends his daughter to Verona, where they are to meet soon. When the girl leaves, Rigoletto gives Sparafucile half of his fee for killing the Duke - the rest is to be paid when he gets the dead body.

The storm begins. Maddalena begs her brother to spare the sleeping Duke. Their conversation is overheard by Gilda, dressed as a man and ready to set off. Sparafucile agrees to kill the next visitor who will appear till midnight. Gilda realizes that her time has come: the voice of love is stronger than reason. She knocks on the door and collapses stabbed by Sparafucile. The storm dies down. At midnight Rigoletto collects the sack with the body and is about to throw it into the river. Suddenly he hears the Duke singing in the night. The hunchback cuts the sack open and sees his dying daughter. Gilda asks her father to forgive her. Rigoletto falls on his daughter’s dead body, crying out in horror: “The old man’s curse!”