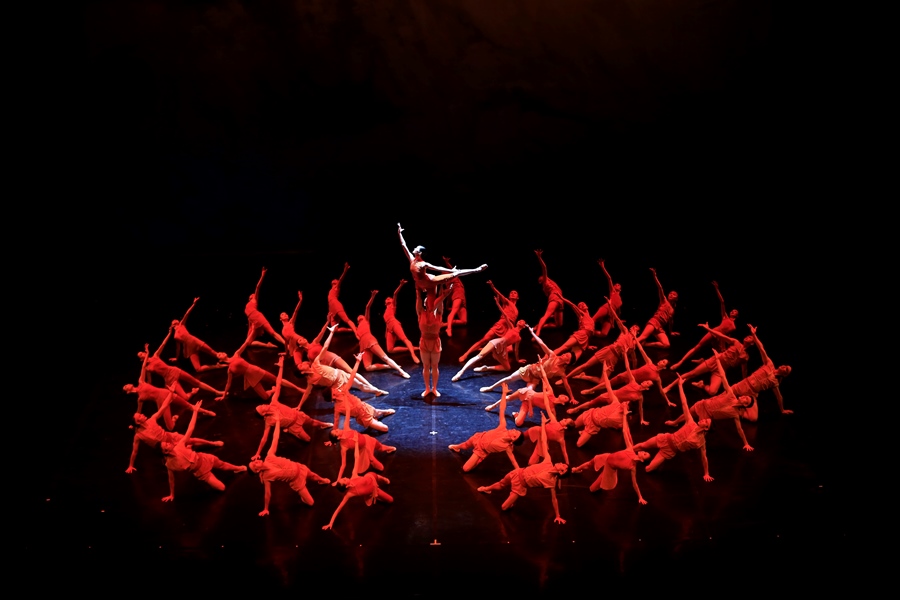 GALA of The National Ballet of China

The National Ballet of China

The Mariinsky Orchestra of the Primorsky Stage
Conductor: Zhang Yi

Prelude
Music by Sergei Rachmaninoff (Prelude in B Minor, Op. 32 No 10)
Choreography by Ben Steveson

The forest at night. A dense fog permits only a glimpse of the foremost trees and cliffs.

Madge is meeting with other witches. They dance about the fire in a circle, but Madge calls them to work. They now work their spell on a rose-colored drapery, whilst dancing. The spell is complete. They drink a farewell, and the flock of witches disappears into the cave.
Dawn gives way to sunrise, and the landscape presents a charming blend of woods and mountains. The Sylphide leads James from a mountain path. This is her domain. Here she will live for the one she loves. James is enraptured with delight and admiration. The Sylphide seems to fathom his every desire and refreshes him with fruits and spring water. James forgets everything for the one he loves. He follows the Sylphide in her easy flight, and their dancing blends together in harmony. This is their happiest moments.

The Sylphide is constantly trying to impress him and at a signal all her sisters come into view through the bushes. Their dancing and delightful groupings arouse James's enthusiasm. He is more than ever taken with the Sylphide, but she eludes his embrace and leaves. Anxious and grief-stricken, James cannot remain alone but rushes after the enchanting creature.

Gurn and his friends come into view on the hill along with Effy and Anna. They seek and question one another about the runaway, but until now their search has been fruitless. They spread out, and Gurn discovers a hat. It belongs to James. He is about to call the others, but at that moment Madge appears, seizes the hat, and flings it away. Gurn is frightened by the witch's sudden appearance, but she calms him and orders him to be silent and clever. Madge now tells Effy, that her prophecy will be fulfilled; for Gurn, that fine, goodhearted young fellow, is destines by fate to be Effy's husband. Effy, although deeply distressed, is nevertheless moved by the slighted Gurn's affection and allows him to escort her home. Madge remains alone.

James returns without having overtaken the Sylphide. His heart is a prey to regret and despair. He sees Madge and readily tells her everything and sees the rose-colored drapery, that hangs from her waist. “Please give me that, so I can give it to the Sylphide.” “I cannot give to thee and you cannot buy it: “Give it me! In return I will bestow upon you all that I possess.” Kneeling James begs her to forgive him for his hardness and to give him life through the possession of the Sylphide. Madge suffers herself to be moved and meaningfully hands him the rose-colored scarf. “Believe in its power and you shall succeed! Entwine her with this gauze. Then her wings will drop and she is yours forever.” Beside himself with joy and gratitude, James kisses the scarf and gives Madge thousand expressions of thanks.

He sees the Sylphide and waves the scarf; She sees it and pleads for the pretty scarf, which he purposely refuses her. She begs him for it promises never more to flee from him. Greedily, she reaches for the scarf, but at the same instant he twists it about her so tightly that she cannot move her arms. The Sylphide is captured and James presses her to him in excitement but she pushes him away from her. Her wings are now falling off. James is first now realizing what he has done. The Sylphide puts her hand to her heart as if she felt mortally wounded. "Take your wedding ring. Make haste, return it. You can still marry her whom you loved before me. Farewell! I die with hope of your future happiness.” The Sylphide's strength is decreasing little by little. The sylphs, her sisters, surround her, and in their arms she breathes forth her spirit. The Sylphs veil the beloved body and carry it away through the air.

At this moment the Madge enters to rejoice at James's despair and counters his reproaches with the icy laughter of revenge. She points to the background, where Gurn is leading Effy to the altar. Overcome with grief, the unfortunate James casts yet another look at his airy mistress and falls to the ground in a swoon.

Premiered in September 1999, The Yellow River, a symphony ballet choreographed by Chen Zemei was based on the piano concerto with the same title. The music was adapted from The Yellow River Cantata, an imperishable masterpiece of “The People’s Musician” Xian Xinghai.

Tchaikovsky’s Symphony No 6 is considered by many to be the composer’s own requiem. Though its strains mourn the passing of life, the music lacks neither warmth nor brightness. In the choreography of Song of Life, Tchaikovsky’s Sixth was selected as the musical accompaniment. It vividly and exquisitely expresses the sentiment of life and blends together with the philosophy of the Chinese intellectual Chuangtse, conveying his notion that “everything changes as clouds change shape” while provoking contemplation of life’s transience.

The National Ballet of China was founded in December of 1959. All of The National Ballet of China’s outstanding artists come from professional academies. During decades of care and support from the government and friends from all social sectors, the company has never ceased enriching its solid Russian foundations with works of different schools and styles. The company has a repertoire of nearly 200 ballets. His repertoire includes classics like The Swan Lake, Don Quixote, Giselle, Carmen, Onegin, and The Little Mermaid, as well as original creations like The Red Detachment of Women, The New Year Sacrifice, The Yellow River, Raise the Red Lantern, The Peony Pavilion, and The Chinese New Year. By both performing Western ballets and creating works of its own with distinct national characteristics, the company has found a successful path for the development of Chinese ballet. It is fusing the classical and the modern, and cultures from all over the world. Over more than 50 years, the company is proud to have made great achievements in talent training and stage productions, as well as in ballet promotion and education. Numerous ballet dancers, choreographers, musicians and stage artists have won major international awards, and have collaborated with international stars in their respective fields. As a world-renowned company with great international influence, the National Ballet of China serves as a cultural envoy and an important window to the nation, spreading the essence of Chinese culture. Currently, Feng Ying, a well-known ballerina and ballet mistress in China is the Executive Director and the Artistic Director.