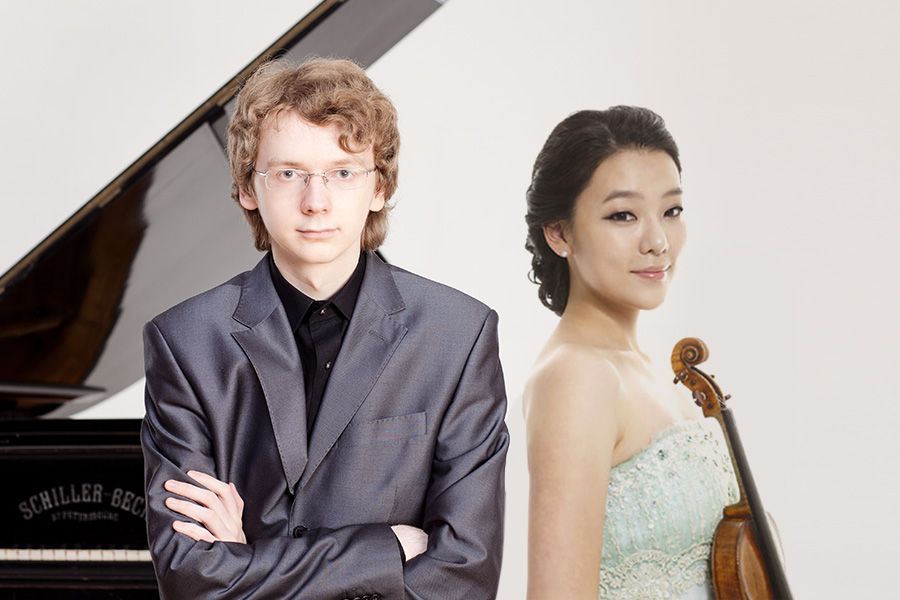 Sergei Prokofiev wrote his Second Violin Concerto for the French violinist Robert Soetens, who lived to the age of one hundred years, during eighty-eight of which he performed as a concert musician. In his Autobiography, Prokofiev recalled that “The concerto was composed in very different countries, thus reflecting my own nomadic life as a concert musician: the main part of the first movement was written in Paris, the first theme of the second movement in Voronezh and the instrumentation completed in Baku, the first performance taking place in December 1935 in Madrid.” Together, the composer and the violinist visited a great many countries, among them Portugal, Morocco, Algeria and Tunisia. Prokofiev’s nomadic life had no effect on the integrity of the musical composition. The concerto was composed in the neoclassical style, then new for Prokofiev, with clearly expressed intentions for simplicity and clarity. The orchestration is transparent – ascetic, even: the first movement opens with the melody of the violin to no accompaniment whatsoever. The romantic second movement is reminiscent of Prokofiev’s magical ballet adagios. The virtuoso finale stands apart for its energy and humour: in the coda, the violin solo is accompanied by… double basses and a bass drum. At the end of this movement, Prokofiev introduced the castanets – in all probability in contemplation of the impending premiere in Madrid.

Three years after moving abroad (on a performing tour that lasted no more and no less than fifteen years) the thirty-year-old Sergei Prokofiev brought to life a longstanding vision – to write a “very passage-like” piano concerto , his third work in this genre. Having received a “poisonous” review, as the composer himself said, from the American press, the concerto nevertheless soon became one of Prokofiev the composer’s most famous pieces and the jewel in the crown of Prokofiev the pianist’s numerous concert performances. Possibly the reason behind the immense popularity of the Third Piano Concerto lies in the fact that the work was composed at the height of his creative career and combined “the still fervent ardour of his youthful temperament … with his emergent maturity and wisdom” (Boris Asafiev). The impetuous flow of contrasting themes that the audience hears – energetic and impassioned, sparkling with energy and mischief, lush and tangibly clear – form a classically strict and proportionate composition of three sections that are ideally structured in terms of form. A supporter of “the new simplicity” in music, Prokofiev succeeded in expounding all of his musical discoveries and inventions, thanks to which his imagination was so rich and filled with such incredible elegance and laconic brevity: there are no prolixities, general spaces or predictable turns in the concerto, and each musical idea is as if marked by the symbol nota bene and makes us listen to the twists and turns of Prokofiev’s inexhaustible imagination with unfailing interest.

The cantata Alexander Nevsky was composed on the basis of music for the eponymous film by Sergei Eisenstein which was released in 1938. The exceptional success that accompanied the film, comparable to that of Chapaev, allowed Prokofiev to create a work independent from the film music and take it to the stage of the concert hall, changing almost nothing in it apart from several details of the orchestration.

The “picture-like” and “visible” nature of the images is one of the typical features of Prokofiev’s music in general and of this work in particular. It is as if the audience “sees” what is happening onstage, even if behind the musical impressions there is no sense of watching a cinema film. In the structure of the cantata itself one can detect features of a symphonic poem in which the first movement is a prologue and the second and third are an exposition that embodies two opposing forces: that of the Russian heroes (represented by Alexander) and that of the Order of Livonian Knights. The fourth and fifth movements form a section in which the fifth movement – the battle scene on Lake Chudskoe – is the undoubted peak and central piece of the cantata as a whole. The sixth movement is an episode of lament for fallen warriors, the only solo section (for mezzo-soprano) in the entire work. And lastly there is the seventh movement — the finale, a reprise, the celebration and triumph of the Russian warriors who are victorious.