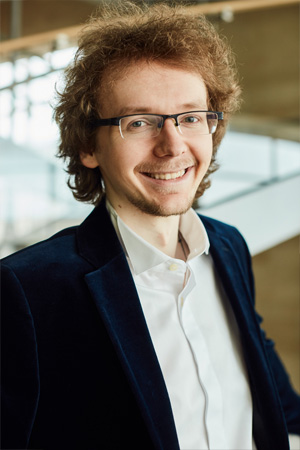 Sergei Redkin was born in Krasnoyarsk in 1991. He began to study the piano at the age of six. From 2009 to 2015 he studied at the Rimsky-Korsakov St Petersburg State Conservatory (class of Alexander Sandler); from 2009 to 2012 he studied composition under Alexander Mnatsakanyan. In 2011 he trained at International Piano Academy Lake Como (Italy) at the recommendation of the St Petersburg Music House, studying under such musicians as William Grant Naboré, Dmitri Bashkirov, Peter Frankl and Fou Ts’ong among others. In 2017 he completed his post-graduate studies at the St Petersburg Conservatory. From 2017 to 2019 he trained at the Queen Elisabeth Music Chapel (Waterloo, Belgium; class of Louis Lortie).

Has taken part in the festival MPHIL 360° (Munich), the Nohant Festival Chopin (France), the Lucerne Festival and the Verbier Festival.

Has participated in programmes of the St Petersburg Music House since 2008.