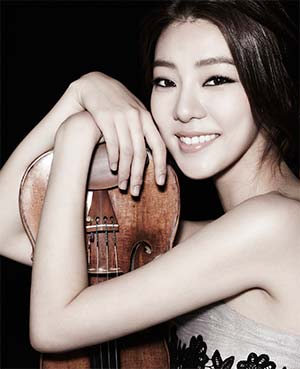 Born in Germany into a musical family, Clara-Jumi Kang began playing the violin at the age of three. Just one year later, she enrolled at the Mannheim Musikhochschule as the youngest student ever accepted to study under Valery Gradov. She went on to study with Zakhar Bron at the Lübeck Musikhochschule.

At the age of six, she was featured on the cover of German magazine Die Zeit together with a major article defining her as a “Wunderkind”. By then, she had already made her debut with the Hamburger Symphoniker at the age of five. At the age of just seven, she was accepted by the Juilliard School with a full scholarship to study under Dorothy Delay. At such a young age, Clara had already performed with orchestras including the Leipzig Gewandhaus, the Hamburger Symphoniker, the Kiel Philharmonie, the Nice Philharmonie, the Atlanta Symphony, the Seoul Philharmonic, the KBS Orchestra and the Korean Chamber Ensemble. At the age of nine, she recorded, she recorded the Beethoven Triple Concerto and a solo recital programme on CD for the TELDEC label.

Clara released her first solo album Modern Solo for DECCA in 2011 including works by Ernst (Dernière rose de l'été), Schubert (Erlkönig) and Ysaÿe (solo sonatas). Highlights of the 2011-12 season included numerous concerts with orchestras and recitals in the USA, a recital at Carnegie Hall (Stern Auditorium), a recital tour of Korea and appearances throughout Asia. The 2013–14 season’s concerts included a tour of Korea with the Seoul Philharmonic Orchestra under Myung-Whun Chung, the Tokyo Metropolitan Orchestra (Suntory Hall), the KBS Symphony Orchestra under Yoel Levi, the Taipei Symphony under Gilbert Varga and other appearances throughout the USA, Europe and Asia. Highlights of 2014 included concert tours with the Wiener Kammerorchester, the Orchestre de la Suisse Romande and the St Petersburg Philharmonic under Yuri Temirkanov. In 2015 Clara-Jumi Kang won 4thprize at the XV International Tchaikovsky Competition.

The 2015-16 season will see collaborations with the Kremerata Baltica under Gidon Kremer, the Moscow Virtuosi under Vladimir Spivakov, the Mariinsky Orchestra under Valery Gergiev, the New Japan Philharmonic under Hartmut Haenchen, the Seoul Philharmonic under Lionel Bringuier, the Berlin Baroque Soloists, the Macao Philharmonic under Lü Jia and the Cologne Chamber Orchestra under Christoph Poppen to name but a few. A highly dedicated chamber musician, Clara collaborates with such musicians as Kyung-Wha Chung, Myung-Wha Chung, Gidon Kremer, Cho Liang Lin, Jian Wang, Gautier Capuçon and Maxim Rysanov, and is a regular artist at the Great Mountains music festival.

In 2012 Clara was selected as one of the hundred “Most promising and influential people of the future for Korea” by major Korean newspaper DongA Times and also received the 2012 Daewon Music Award for her outstanding concert achievements internationally. She was named “Kumho Musician of the Year” in 2014.

Since 2011 Clara has resided in Munich. She currently plays on Antonio Stradivarius’ “ex-Strauss” 1708 violin, on generous loan from the Samsung Cultural Foundation Korea.