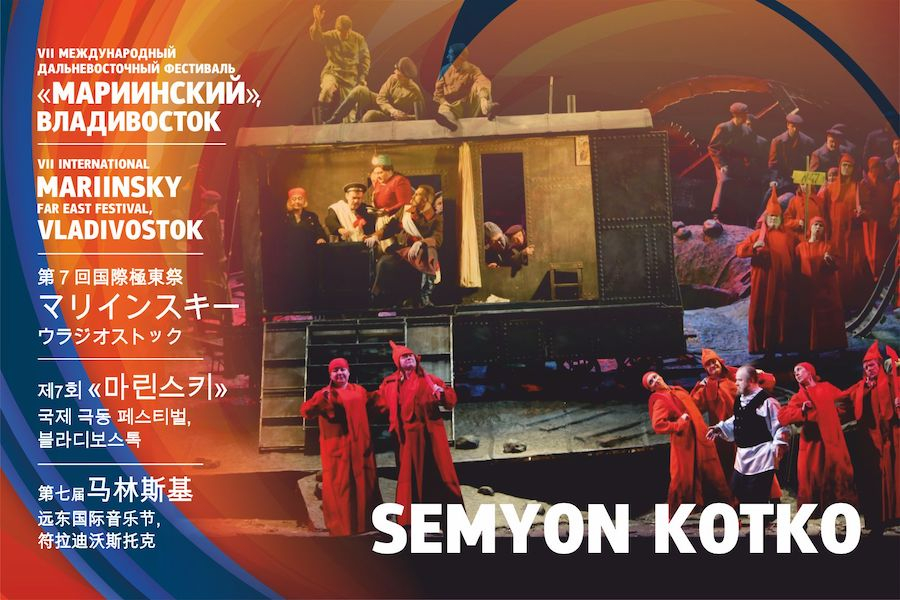 Act I
Semyon Kotko the soldier is returning from the front, but instead of his home he sees an empty area of land, pitted by crows, in the midst of which strange, guarded people are hiding – these are his fellow villagers, the friends of his youth, his now grown up sister Froska, her young suitor Mikola and his mother, older, eaten up by woes and grief...
Seeing his beloved Sofia overwhelms Semyon with a wave of tenderness and warmth. But Sofia's father, the old sergeant-major Tkachenko, despite the promise he gave to Semyon at the front, now refuses to give his only daughter in marriage to him, to a beggar.
Help unexpectedly comes in the form of Remenyuk, a communist and chairman of the village council, the sailor Tsarev and his bride Lyubka. Meeting this trio raises contradictory feelings in Semyon's soul, but he is prepared to do anything for Sofia's sake. The new allies and matchmakers are convinced that Tkachenko the kulak will not dare refuse representatives of the revolutionary authorities.

Act II
Tkachenko is attempting to weather the storm. He has given refuge to Klembovsky, the local landowner disguised as a hired worker, whom he wishes Sofia to marry.
However, the undesirable matchmakers are already at his door. The festive ceremony of marriage between Sofia and Semyon turns into a terrible farce. Tkachenko watches on in powerless terror as the uninvited guests burst into his house...
The high-spirited "red wedding" is interrupted by the arrival of the Germans. All are seized by a feeling of impending doom, a fear of some terrifying destructive power that has yet to be faced.

Act III
Amidst the ruins and the ashes, young lovers can be seen in the haze, like ghostly apparitions of fleeting happiness... Among them are Semyon and Sofia, Tsarev and Lyubka, Mikola and Froska – three faiths, three hopes and three loves with no future.
The fragile, dawn silence is interrupted by an inexorable, vengeful force. The Reds, the Germans, the White Guards and the haydamaks have all become entangled in the bloody mass.
Mikola and Lyubka's eyes see Mikola's father, the old man Ivasenko and Tsarev the sailor, Lyubka's beloved.
In the glow of the all consuming fire, mad people are seized by convulsions. The figure of Lyubka, now gone mad, looms over the terrible site of the fire with a candle...

Act IV
Semyon and Mikola make it safely into the woods, where they join with a brigade of partisans. Remenyuk, the brigade's commander, is stunned by the horrible punishment of Ivasenko and Tsarev at the hands of the haydamaks. Remenyuk, standing by the bodies of the hanged men, calls on his fellow men to seek vengeance. The partisans swear to take revenge for the deaths of their comrades and to surrender their own lives for the sake of the people.
In the brigade of partisans, Semyon is training new recruits in the art of war. Unexpectedly, Froska appears. Sobbing, she tells of the excesses of the occupying forces, of how Tkachenko is forcing Sofia to marry Klembovsky the landowner. At the same time, the band receives orders to carry out a reconnaissance mission of the enemy camp and join with the forces of the Red Army. Semyon and Mikola leave for their native village to "root out" the Germans.

Act V
A village utterly devastated by fire. The square is deserted and no-one is to be seen bar Semyon's emaciated mother and a bardura player. Candles burn in the church. Weeping, Sofia rises atop the church-porch: if she marries Klembovsky, it will be against her will. But Semyon and Mikola get there in time. Gripped by fury, rage and the desire for revenge, Semyon throws a grenade into the church... Sofia is at liberty. But the heroes are caught by the haydamaks and the partisan spies are sentenced to death by firing squad. Tkachenko anticipates with pleasure his long-desired punishment of the hateful Kotko.
The partisans storm into the village and they free Semyon and Mikola. The people celebrate the victory.