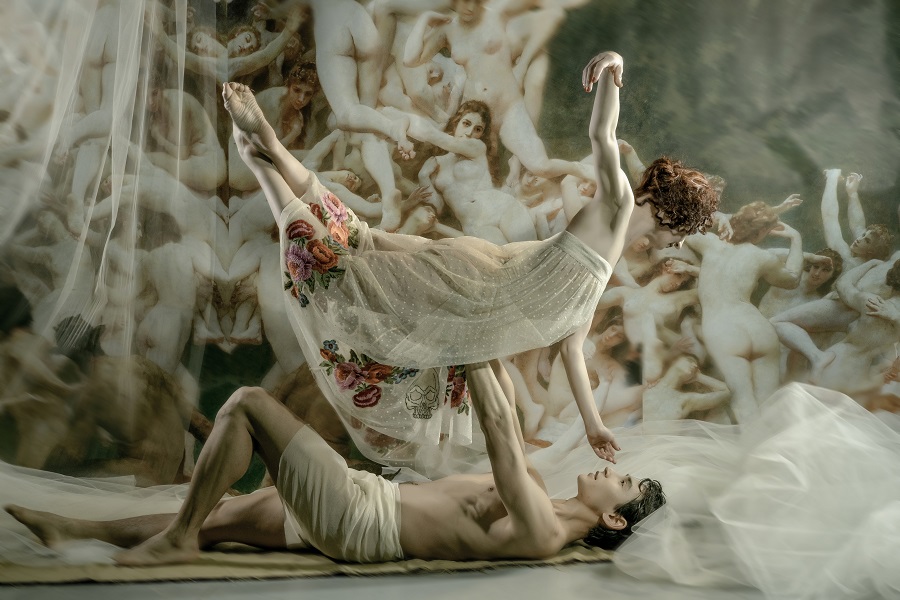 Music by Maurice Ravel
Libretto by Dmitry Pimonov and Olga Kuznetsova based on the novel of the same name by Long and the libretto by Mikhail Fokin
Choreographer: Dmitry Pimonov
Stage and costume designer: Stas Lopatkin
Lighting Designer: Yegor Kartashov

Shepherds and shepherdesses walk in procession to the Temple of Eros on the island of Lesbos. Daphnis and Chloé who are in love with each other join the procession. Young people start their play dance in which they provoke mirth and dalliance with each other. Dorcon conceives a passion for Chloé. Daphnis sees Dorcon trying to kiss Chloé and pushes him aside angrily.

Dorcon tries to give Chloé the measure of his feelings with his passionate dance but is not successful. Daphnis matches Dorcon’s dance against his gracious dance which highly elates Chloé. She kisses Daphnis’ lips. For the first time in his life, the young shepherd is inexplicably thrilled by girl’s kiss. Shepherdesses take Chloé away; everyone goes off.

Daphnis is left alone. At that moment Lycaenion, a girl in love with Daphnis, returns to allure him. Smitten with her beauty, he is carried away by temptation.

Warlike sounds and war cries are heard, coming nearer. Thanatos’ warriors attack the island. Having heard the screams, Daphnis comes running to find Chloé, but his search meets with no success since Chloé has been captured and carried off by warriors. Mad with despair, Daphnis falls swooning.

Moved to pity by Daphnis’ tears, the Nymphs appear to invoke Eros’ aid.

Wakened from sleep, Thanatos’ warriors wait for their god. Thanatos appears and the warriors are swept with a frantic dance. Warriors bring Chloé who beg Thanatos for mercy, but her cries only feed his flame of passion. Eros and the Nymphs appear suddenly. Eros strikes Thanatos and his warriors blind to set Chloé free. Eros gives his blessing to her marriage to Daphnis.

The Nymphs prepare Chloé to meet Daphnis. Daphnis appears and they throw themselves into each other’s arms. The Nymphs whirl the reunited lovers in a dance.

Shepherds and shepherdesses act out an episode about Pan’s love of Syrinx. Daphnis and Chloé are involved by the Nymphs in dancing. Before the altar of Eros, Daphnis and Chloé pledge their love and swear to part no more. Everyone feels happy and throws in a bacchanale, triumphing and glorifying Eros.

Daphnis et Chloé is a love story about a young shepherd and a beautiful shepherdess. We see how they surmount obstacles in the way to their love and how their feelings grow. I have slightly changed Fokine’s libretto to which Ravel set music. I replaced brigands by warriors of Thanatos, the god of death in Greek mythology, and Pan by Eros, the god of love. In the performance there is a characterful conflict between Thanatos and Eros, between aggressive sexuality that originates in egoistic and destructive desires to possess and sexuality that originates in carnal infatuation ensuring the continuity of life on the Earth.
I hear this conflict in Ravel’s score. Aggressive sexuality is clearly heard in the scene where Thanatos’ warriors attack Lesbos and abduct Chloé. In each scene where the Nymphs or shepherdesses appear, there is a lyrical exhibition of eros. Daphnis et Chloé is choreographed as a neoclassical ballet tinctured with jazz dance in order to contrast different characters and therefore oppose love with destruction.
Dmitry Pimonov