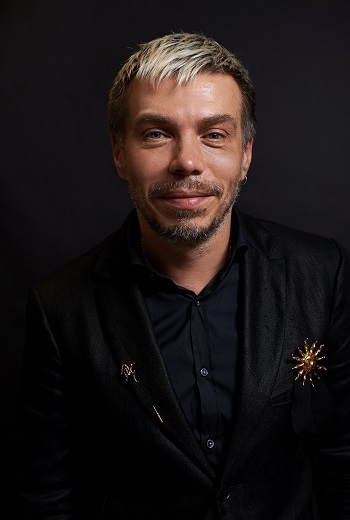 Stas Lopatkin is a well-known Russian designer and artist. Born in Leningrad, he graduated from the Art and Graphic Design Department of the Herzen State Pedagogical University of Russia. His graduation project was to illustrate The Incredible and Sad Tale of Innocent Eréndira and Her Heartless Grandmother novella by Gabriel García Márquez. The project was shown at the Manege Central Exhibition Hall and won a Saint Petersburg Muses grant.

Started with set designs and private commissions, Stas Lopatkin continued his career to create his own brand STAS LOPATKIN and the author’s Beautiful Clothes Studio in 2001. His first collection was premiered at the Defile on Neva fashion show in spring 2003. Since then STAS LOPATKIN has annually released his season collections to demonstrate them on various runways in Russia and Europe.

Stas Lopatkin as a designer participates constantly in charity auctions, shows or exhibitions and serves as a juror or expert at numerous international competitions including The Admiralty Spire. In addition to creating designer collections he engages in remodeling some historical costumes and designing costumes for motion pictures, shows, TV programs, and theatrical or concert performances. Stas Lopatkin works with domestic or international entertainment stars or opera celebrities and collaborates with the State Russian Museum, the State Hermitage Museum, the Tsarskoye Selo State Museum, the Peterhof State Museum, the Saint Petersburg State Museum of Theatre and Music, the Youth Theatre on the Fontanka, the Dramatic Theatre on Liteiny, and the Mikhailovsky Theatre. From 2009 he has annually taken part in the Associations project in the Tsarskoye Selo State Museum.

Some dresses and costumes branded with STAS LOPATKIN have been collected by the State Hermitage Museum and the Tsarskoye Selo State Museum.