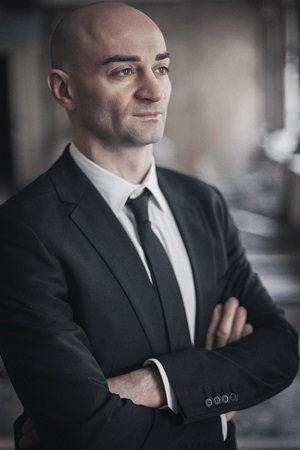 Born in Volgograd. In 1989 he graduated from the Studio School of the Leningrad State Music Hall and joined the company as a ballet soloist the same year. Remaining a guest soloist at the Music Hall in St Petersburg, from 2000 he danced at the Lahti City Theatre (Finland) in musical drama Anna Karenina, in addition to collaborating with the Neoclassical Dance Company of Catalonia (Barcelona, Spain, 2002), the Academia de Bailado Fernanda Canossa (Porto, Portugal, 2003) and the Madeira Casino and TV Ballet Company. Has danced at the ERI dance theatre (Turku, Finland, 2007 – 2011).

In 2010 he graduated from the Vaganova Ballet Academy having specialised as a choreographer (class of Edvald Smirnov). His degree work was musical and choreographic suite with reader after motifs from Hoffmann’s Nußknacker und Mausekönig (co-production with the Vaganova Ballet Academy and the New Japan Philharmonic Orchestra at Suntory Hall, Tokyo, Japan). In 2011–2014 he was choreography coach for the musical Dance of the Vampires at the St Petersburg Musical Comedy Theatre.

At the Mariinsky Theatre he staged the dances in the opera Faust by Charles Gounod (directed by Isabella Bywater, 2013). For Mariinsky Theatre principal dancer Igor Kolb he has created the miniatures Malachiya, Solo and The Faun.

For Boris Eifman Dance Academy students he has staged the productions Synchronized watches, Alemanda, Waltz-remembering, Dialogue with bassoon. For Gala des Etoiles in Luxemburg (2017) he staged Russian Dance to music by Pyotr Tchaikovsky.

For the ERI dancer theatre he has staged Hereafter – Dedication to Glenn Gould and the miniatures Nausicaa and Le Roi danse. Specially for the TV project Bolero he created the work Je suis malade for the Mikhailovsky Theatre prima ballerina Irina Perren and Peter Tchernyshev, the American figure skating champion. In the project Day and Night for Mikhailovsky Theatre principal dancer Marat Shemiunov, together with video designer Maxim Svishchov he created the performance Nerve.

He was choreographer of the musicals Master and Margarita, Nameless Star, Demon Onegin, Oscar and the Pink Lady, Tchudo –Yudo.

As part of the Creative Workshop of Young Choreographers project at the Mariinsky Theatre, in 2018 he presented the ballet Divertimento to music by Leonard Bernstein, in 2019 – Cocertino Bianco to music by Georgs Pelēcis.

On the Primorsky stage of the Mariinsky Theater, the premieres of his ballets Daphnis et Chloé (2020) by Ravel and Visions fugitives (2020) by Prokofiev took place. He created Rondo-surprise (2019), Ciaccona (2019), Solo for Three (2020), Baroque Game (2020) and Sonata (2020) at The Kazakh National Academy of Choreography. In the Buryat Opera and Ballet Theater, as part of the Buryat Tales and Legends project, he staged the ballet Happiness and Sorrow (2019) based on a folk tale to music by Pavel Karmanov.

For the Educational center Sirius (in Sochi) he created the production The Swan (2019) based on Andersen's fairy tale The Ugly Duckling to music by Tchaikovsky and Queen.

Collaborates with the fashion house of Tatyana Kotegova, the British band The Tiger Lillies, the St. Petersburg group Theodor Bastard, actor Dmitry Bykovsky and the George Danelia Foundation. Rosbalt information agency included Dmitry Pimonov in its hit list of the creative intelligentsia as part of the project St Petersburg’s Avant-garde.