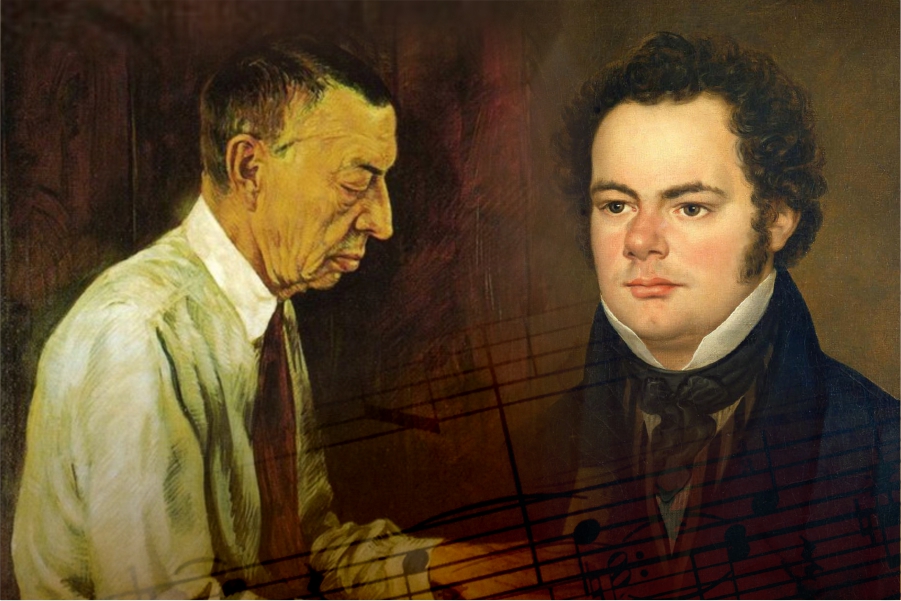 The Primorsky Stage chamber playbill of the new season opens with works by two geniuses whose oeuvres are at the two opposite ends of musical romanticism — opuses by the Austrian Franz Schubert (1797–1828) and compositions representing one of the late periods in Sergei Rachmaninoff’s music (1873–1943).

The concert features the composers’ last vocal cycles. Among songs to poems by Ludwig Rellstab from a collection Schwanengesang (Swan song), compiled and published after Schubert’s death, the dramatic Aufenthalt (Resting place) and the exalted Ständchen (Serenade), which has become a kind of the composer’s “emblem”, have gained the most popularity. In his Six Romances, Op. 38, Rachmaninoff for the first time turned to poems written by his contemporaries — the most prominent poets of the Silver Age, who were striving to update poetic images, forms and expressive means of the Russian language. Following the peculiarities of the texts, Rachmaninoff makes the style of his miniatures more sophisticated: the vocal line becomes even more exquisite and closer to declamation, while the role of the extended and rich piano part is given more prominence.

The highlight of the evening are unusual pieces for voice, for example, the song The Shepherd on the Rock (Der Hirt auf dem Felsen), the instrumentation of which includes clarinet, imitating sounds of the mountain echo. Creation of Rachmaninoff’s vocal masterpiece without words was inspired by the great Russian soprano Antonina Nezhdanova. She was very surprised to find no text in the composition. “What do you need words for, if you can express everything much better and fuller with your voice?” replied the composer. That was how the famous Vocalese was born to become one of the most popular Rachmaninoff’s compositions, which can be frequently heard arranged for various instruments and orchestra.

The vocal nature of Schubert’s gift can also be heard in his instrumental works, in particular, in many of the composer’s piano sonatas. One of his original compositions written in this genre is Sonata in A-minor with its not infrequent moments of “freezing-up” and “divine lengths”, carrying the listeners away into the world of dreams. Four full-scale pictures flash before the listeners in Rachmaninoff’ Suite No. 2 for Two Pianos — a solemn marching procession, a spinning floating waltz, a lyrical romance and a rapid whirling tarantella will complete this evening.