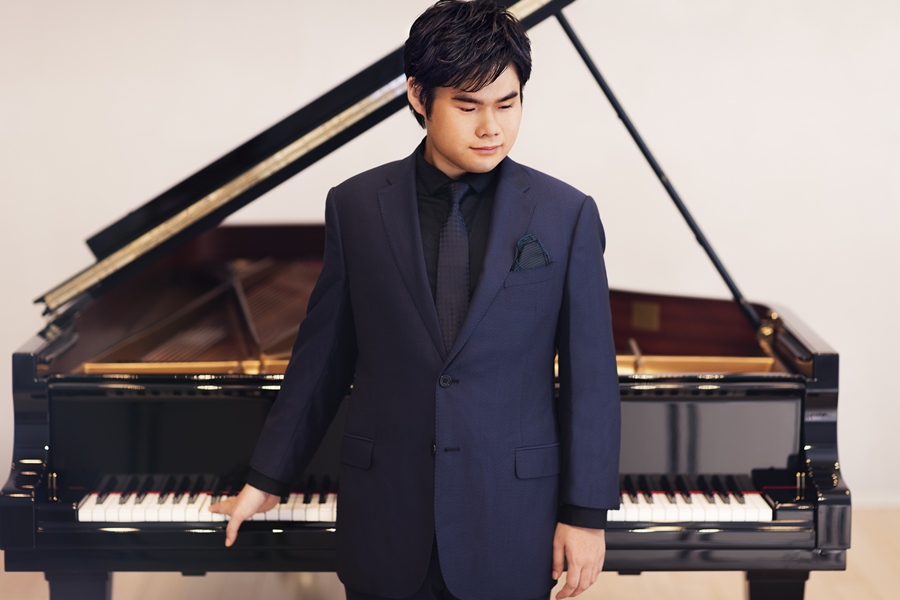 Dedicated to 85 years of Rodion Shchedrin

The Enchanted Wanderer (concert performance)
Opera for three solo voices, chorus and orchestra
Performed in Russian (the performance will have synchronised English supertitles)

Ivan Severyanovich Flyagin, a novice at the monastery in Valaam, is reminiscing about former days. Before renouncing the material world, he once accidentally whipped a monk to death. The monk appeared in a vision, reproaching Ivan for taking his life before he could make his final confession. He told Ivan Severyanovich that he was God´s "promised" son and that he would die but never pass on until real "death" comes, so Ivan enters the monastery on the island of Valaam. And although Ivan Severyanovich did not believe in it, the monk´s prophesy came true. While on his travels, Ivan was captured by the Tatars and lived with them for ten years in Ryn-peski. He managed to flee from them, met with some shepherds on his way back to his native land and entered the service of a Prince, who admired him for his skill with horses. But after three years of devoted service Ivan Severyanovich took to drinking binges. At an inn, Flyagin met a landowner with the gift of hypnosis. The same night in another inn Ivan Severyanovich spent all the money entrusted to him by the Prince on Grusha, a beautiful gypsy songstress.

When the Prince demands his five thousand roubles, Flyagin shows remorse and relates his tale of the beautiful gypsy. Having fallen in love with Grusha, the Prince paid her immense dowry of fifty thousand gold roubles and took her home with him. But the Prince is a fickle man and he soon tired of Grusha. During his trip to town, Ivan found out that his master planned to marry a rich noblewoman and, returning home, could not find the gypsy girl: the Prince secretly removed her to the swampy woodlands. But Grusha escaped her incarceration, met Flyagin and forced him to take a dreadful oath – to kill her, otherwise she would kill the unfaithful Prince and his young bride. In order to carry out Grusha´s request, Ivan Severyanovich throws her into a river from a cliff top. The chorus mourns her death. In his visions Ivan Severyanovich Flyagin hears the voices of the monk and the gypsy girl Grusha whom he murdered.

Composer Rodion Shchedrin was born on 16 December 1932 in Moscow. In 1955 he graduated in composition and piano from the Moscow Conservatoire. He has written works in various genres, including the ballets The Little Hunchback Horse (1956), Carmen Suite (1968), Anna Karenina (1971), The Seagull (1979) and Lady with a Lapdog (1985), the operas Not for Love Alone (1961), Dead Souls (1976), Lolita (1994), The Enchanted Wanderer (2002) and Boyarynya Morozova (2006), the orchestra concerto Naughty Limericks (1963), Poetoria (1968), piano concerti and twenty-four preludes and fugues. Rodion Shchedrin’s creative achievements have resulted in numerous prestigious titles, such as Correspondent Member of the Bavarian Academy of Fine Arts (1976), People’s Artist of the USSR (1981), Honorary Member of the Academy of Fine Arts of the GDR (1982), Honorary Member of the International Council of Music (1985), Member of the Berlin Academy of Arts (1989), Honorary Professor of the Moscow and St Petersburg Conservatoires and Composer of the Year of Pittsburgh Symphony Orchestra (2002) in addition to prizes including the State Prize of the USSR (1972), the Lenin Prize (1984), the State Prize of Russia (1992), the Shostakovich Prize (1992) and the Crystal Prize of the World Economic Forum in Davos (1995). He holds an award “For Services to the Fatherland”, 3rd class (2002).

ENCHANTED BY THE RUSSIAN SOUL...

“If the “Russian soul” indeed exists, then Leskov answers the question better than anyone else,” – Rodion Shchedrin said in an interview after the premiere of his opera The Enchanted Wanderer after the novella by Nikolai Leskov.

The Enchanted Wanderer, Rodion Shchedrin’s fourth opera, was commissioned by the New York Symphony Orchestra in 2002 and premiered under conductor Lorin Maazel, the orchestra’s Artistic Director, on 19 December 2002 at the composer’s anniversary performance at the Avery Fisher Hall.

Rodion Shchedrin has frequently stated that “the temperature for opera should be much higher than the norm, not 36.6, but 39.5, or even 40 degrees!”, and he has always been drawn to subjects that combine human passions with global philosophical issues. “Leskov is one of my favourite Russian writers,” the composer admits. Nikolai Leskov’s sharp and metaphorical language is akin to Rodion Shchedrin’s distinct, intonationally jagged and expressive musical language. In 1988 the composer wrote several Russian liturgies based on Leskov’s novella The Sealed Angel. Shchedrin was drawn to the novella The Enchanted Wanderer by its “power and the prominence of the characters, the variety and drama in the plot, and the opportunity to tap into the strata of ancient Russian musical culture, untouched even in classical music.”

The story of the novice Ivan Severyanovich Flyagin, a “former horse expert”, and other diverse characters can be viewed as a kind of Life, a kind of bylina and even as an adventure story (the subtitle in the first edition of the book reads The Enchanted Wanderer, His Life, Experiences, Opinions and Adventures, similar to subheadings of other works in the genre). Ivan Severyanovich’s extraordinary nature is highly contradictory: deeply rooted faith and true suffering along with bitter cruelty, conscientiousness and assiduity are combined with unconcern and recklessness. Although imbued with many talents, he never truly tries to change his destiny, accepting life as it is at the present time.

The immense spectrum of life and its situations where the protagonist finds himself are portrayed in virtuoso style in Shchedrin’s score. The opera contains different musical genres and forms at one and the same time: stylisations of Russian standard-bearing singing (the one-voice hymn God Our King Appear to Us can be heard in the Prologue and Epilogue, providing a framework for the opera); bell-ringing at points of climax; the pastorals and folk-tunes that the composer remembers from his childhood; the stylisation of ancient village laments that Shchedrin heard from folkloric expeditions; and, lastly, the gypsy romance Oh, the evening sunset, are you mine?, much loved by Leo Tolstoy. All of this can be felt in the colourful, sparkling musical scene created by the soloists, chorus and symphony orchestra, a special role being given to the percussion and “exotic” instruments, such as the balalaika, gusli and singing saw. Rodion Shchedrin defines the genre of The Enchanted Wanderer as an “opera for concert venues”, in so doing bringing the work into the oratorio style. The oratorio genre can be felt in the very fabric of the plot: the soloists are, simultaneously, storytellers and principle characters and the chorus plays a major role too. The composer says that “in a way this opera resembles Bach’s Passions. Just as, for example, in Bach’s St Matthew Passion the characters talk about themselves they play other roles too.” But other associations besides Bach can arise, in particular with Igor Stravinsky’s Oedipus Rex, where the tragic plot is also clad in severe constructivist forms. The initially theatrical asceticism of The Enchanted Wanderer is more than compensated by the dynamism of the music. Shchedrin is a brilliant composer who can maintain the visual and aural attention of the audience through purely musical means.

Renowned author Solomon Volkov saw Shchedrin’s opera The Enchanted Wanderer “as a contemporary view of the fundamental nature of the Russian character”. He wrote that “it was an opera-parable, an opera-legend, a serious and profound attempt to get to the bottom of the so-called Russian soul. And of course the opera must be premiered in Russia.”

The Russian premiere of The Enchanted Wanderer had to wait four and a half years and it is noteworthy that it is to be held in St Petersburg, a city which according to Rodion Shchedrin is a “holy place” from which “the world has received many gifts, and not just in music”. As the composer said at a press conference, “I feel like a native of Petersburg though I was born in Moscow and studied at the Conservatory there. I probably inherited this from my grandmother – she attended the Smolny Institute for Noble Maidens. Or from my composition teacher Yuri Shaporin – he was friends with Blok...”

Concerto No. 5 in E-flat Major, op. 73 (1809) is the most grandiose Beethoven’s creation in this genre (it is not by chance that it is popularly known as “Grand’ and “Emperor”). Its artistic concept and scale bring it close to such Beethoven’s symphonies as the Third, the Fifth, the Seventh... The French Revolution and the Napoleonic Era generated a special type of “military” symphonies and concerti. How much does the Fifth Concerto stand out from them all! Not by external signs of time, but by the air of that heroic era imbued with hymnic intonations, marching rhythms infused with the intensity of struggle, emotional elevation. E-flat Major of the Master’s last concerto spans an arch back to the first experience of the young genius - Concerto E-flat Major (1784), which the fourteen-year old Beethoven played in front of the Bonn’ s Prince Elector.