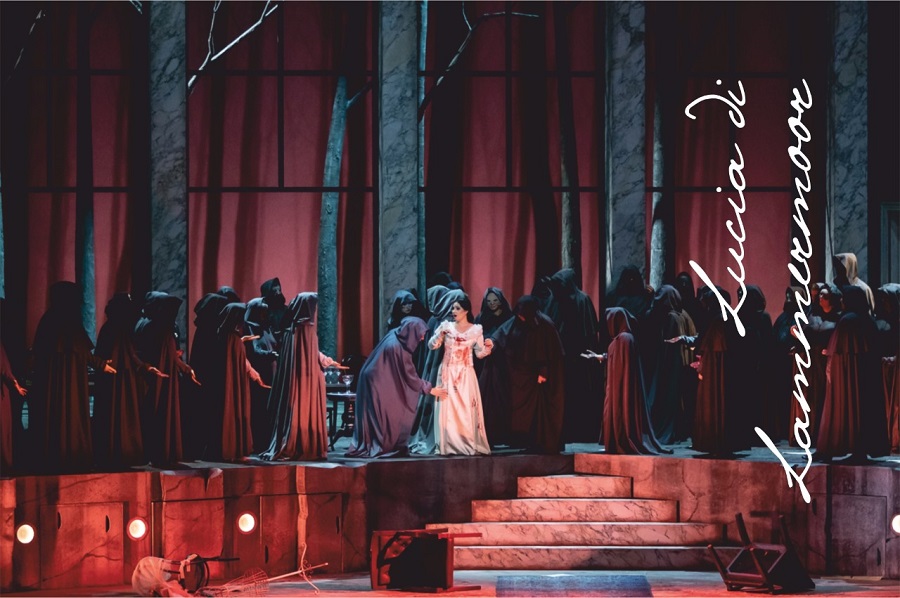 Part 1. The Departure
Act I
Scene one.
An intruder has been spotted at night on the grounds of Ravenswood Castle. Norman, the captain of the guard, sends his men off in search of the stranger. Lord Henry tells Raymond Bidebent, his sister Lucia’s chaplain and tutor, that his family’s fortunes are in danger. Edgar Ravenswood, the son of the castle’s previous owner, can maneuver Henry out of his property and gain back his political influence. Only the arranged marriage of his sister, Lucia, can save them. However, Lucia does not want to accept the marriage. Raymond reminds Henry that the girl is still mourning the death of her mother. But Norman reveals that Lucia is concealing a great love for a mysterious stranger who saved her from the attack of a raging bull. She meets with him in secret. The returning men reveal the identity of the man whom Lucia is secretly meeting each day – it is Edgar Ravenswood. Henry is furious.

Scene two.
Lucia is waiting by an old fountain with her maid Alice for a secret meeting with Edgar. Lucia is frightened by the legend of the fountain: a woman was murdered here by an insanely jealous member of the Ravenswood family. The ghost of the murdered woman has recently appeared to her, beckoning Lucia to follow her. When the ghost disappeared, the water in the fountain turned red with blood.

Edgar appears. He explains that he must leave Scotland and go to France on a political mission. Before he leaves, Edgar wants to ask Henry for Lucia's hand. Terrified of her brother’s reaction, Lucia asks Edgar to keep their love a secret. Edgar tells Lucia of his undying hatred of the Ashtons, how he swore a vow of vengeance upon her family. But now the vow is destroyed by love. The young lovers solemnly pledge their troth by exchanging rings.

Part 2. The Marriage Contract
Act II
Scene one.
Guests are arriving at the wedding of Lucia and Lord Arthur Bucklaw. Henry is still worried that Lucia will not accept the groom. Norman reassures him: all the letters that Edgar has written during his long absence have been seized and replaced with artful forgeries in which Edgar confesses that he has fallen in love with another woman. As his sister enters, Henry chastises her for being so melancholy on the day of her wedding. She replies that his cruelty is the cause of her grief. Henry tries to persuade his sister to forget her illicit love and hands her a forged letter. Lucia is shattered: all her tears, her hopes, and her yearning have been wasted on an unfaithful man. At Raymondʼs fervent pleading, the exhausted Lucia finally gives in and agrees to marriage.

Scene two.
The guests enthusiastically greet Lord Arthur Bucklaw. Arthur assures Henry of his friendship and promises his support. He asks, however, wherever the rumours about Edgar Ravenswood being in love with Lucia are true. Lucia appears.
Lucia is showed into the room with her marriage contract on the table. There is commotion outside: it is Edgar, who has now returned from France. The men draw their swords. Lucia falls unconscious. Raymond intercedes and shows Edgar the contract with Lucia’s signature. Lucia tearfully confesses that the signature is hers. Enraged, Edgar returns his ring and demands that she returns hers.

Act III
Scene one.
A heavy thunderstorm rages outside. Henry visits Edgar at the Wolf's Crag. He challenges Edgar to a duel. They agree to fight in the morning by the graveyard of the Ravenswoods. Scene two.
The guests continue to celebrate the wedding. Raymond breaks up the festivities with terrible news: Lucia has gone mad and stabbed Arthur to death. The crazed Lucia, her nightgown stained with blood, appears in the hall. She thinks that she is once more in the garden, on the way to meet her beloved Edgar. However, her happiness quickly turns into horror as she sees the ghost. Lucia begs Edgar to hide and leads him to the altar decorated with roses. She sees a church, where she is married to Edgar, not Arthur. Lucia collapses.

Scene three.
Edgar is at the graveyard of the Ravenswoods, where he is to duel Henry. He laments that he has to live without Lucia and hopes that his duel with Henry will end his own life. Guests coming from the Castle tell him that Lucia has gone mad and is dying. The bell tolls.

Two intertwined love triangles, jealousy, unfaithfulness, revenge, escape, sorcerer, poison, two murders, one madness and a threatening thunder at the close: The Enchantress has it all. It can boast a full spectrum of tried and tested tricks of the 19th century Romantic opera. The Enchantress was written by a great composer, who was at the peak of his creative genius at the time, and a popular playwright, who made his debut as a librettist. These circumstances have defined the opera’s contours; its score is brilliant from ouverture to the finale, while the writing sometimes lacks in skill. People, their feelings and relationships are described vividly, thoroughly, and masterfully; however, the situations they find themselves in often seem too melodramatic to the spectators, especially modern ones. This feature of The Enchantress has affected its not-so-joyous life on stage. Despite the fact that musically it is in no way inferior to either Eugene Onegin, which was written almost a decade earlier, or The Queen of Spades, created three years later, The Enchantress is a rare guest on the operatic stage. The current performance of The Enchantress at the Mariinsky Theatre is the first one following a decade-long break. The Enchantress was Tchaikovsky’s favorite brainchild. It took the composer two years of hard work (from 1885 to 1887) at the picturesque Maidanovo house, where he had lodgings, to finish the opera. Tchaikovsky’s correspondence and diary preserved every step of this work, which at different times made the composer elated or reduced him to a nervous wreck. He did not have a complete libretto as Ippolit Shpazhinsky sent it in parts, which Tchaikovsky would analyze and then present his recommendations. The world premiere took place on 20 October 1887 at the Mariinsky Theatre; the composer himself conducted the first four performances. The greatest singers of the Mariinsky Theatre appeared in lead roles, including Ivan Melnikov (Grand Prince), Maria Slavina (Princess, his wife), and Fyodor Stravinsky (Mamyrov). The opera was not a success; a total of twelve performances were given at the theatre. Tchaikovsky was greatly shaken and rattled by this failure; he wrote to Nadezhda von Meck: “I am still convinced it is my best work. Meanwhile The Enchantress is laid aside to collect dust in the archives.” Indeed, The Enchantress should not be laid aside, but rather performed on modern stage. Love and freedom – its two main themes – belong to the category of eternal ones. The Enchantress amounts to a treatise on different kinds of love. Kuma’s love for the Prince is a transforming, passionate, and all-encompassing love of a young independent woman. The Prince’s love for Kuma is a young man’s first passionate feeling, which leads him to almost completely disown his parents. The Grand Prince’s love for Kuma is an animalistic, tormenting, suffocating passion of an aged and severe man, who is not adverse to violence. The spousal love between the Grand Prince and Princess is destroyed by his lustfulness and her vengeful jealousy. The Grand Princess’ motherly love for the Prince turns her soul inside out; in the last moments we see this “fanatic aristocrat” (Tchaikovsky) as a grieving mother, who mourns the loss of her child.
The theme of love is almost always closely linked to the theme of freedom. The symbol of freedom in The Enchantress is Russian landscape, those boundless and vast spaces, where Kuma sings she wants to fly free as a bird. Longing for freedom permeates the entire opera. Kuma’s house, which stands where the Oka River flows into the Volga, attracts the visitors with its spirit of freedom, both literally and figuratively. The love between Kuma and the Prince can survive only in total freedom – both from societal hierarchy and his parents’ self-will – and that is why they escape, using the great river as their ally. On the contrary, absence of freedom leads to violence, to which the Grand Prince resorts as a slave to “love,” and the Princess and Mamyrov – as slaves to “honour.”
“The listener/spectator will leave the theatre staggered, yet reconciled and satisfied,” wrote Tchaikovsky to Shpazhinsky about their work. The Enchantress does the same for the modern spectators as well.
Khristina Strekalovskaya