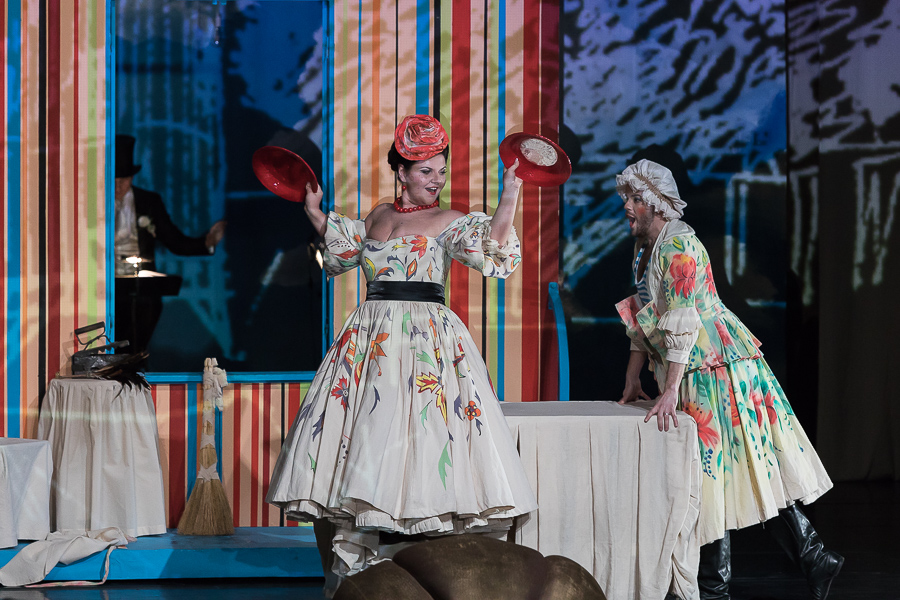 Comic opera in one act

Kolomna, a small town in the suburbs of St Petersburg. A hut near the church.

Parasha is at the window, looking out for her sweetheart, hussar Vasily. She tries to find out the reason for her suitor’s three-day absence. The hussar does not like being interrogated. He tries to laugh it off and pledges his love for her. Hearing his passionate declaration of love, Parasha believes him. The lovers agree to meet the next day.

Parasha’s mother is trying in vain to find a new cook because their old one has passed away: cheap servants are so rare! She orders Parasha to go and find a replacement while she indulges in memories about recent their life of happiness and prosperity. She is joined by her neighbor. Talking about the weather, the two women finish each other’s sentences: the life is such a routine full of the same daily chores.

While they are chatting, Parasha brings a new kitchen maid, Mavra (who is none the other than Vasily the hussar in disguise). She looks nice and is prepared to work well and for little money. This is good enough for the widow. She tells Parasha to make sure that Mavra performs her duties diligently and departs.

Left alone at last, the lovers are overjoyed. A shout from the mother, who is getting ready for shopping with the daughter, makes them part. It’s time for the kitchen maid to get down to her duties.

Once on his own, Vasily decides to have a shave but he is caught in the middle of this manly ritual by the mother, who returns unexpectedly from her shopping round. She faints, screaming: “Robber! Villain!” Parasha rushes to her mother. The neighbor runs in and shouts: “Stop the thief!” The hussar leaps out of the window. Parasha fruitlessly tries to get him back.

The one-act comic opera Mavra was composed by Stravinsky in 1922 and was dedicated to the memory of Pushkin, Glinka and Tchaikovsky. These names determined the initial character of the opera. Even in their most sublime creations, Pushkin, Glinka and Tchaikovsky were no strangers to worldly themes. They were not afraid to be accused of “downgrading” the style, being able to  find some charm in everyday’s life of common people and to present this life, using its own language. The Little House in Kolomna, which served as a plot for the opera, is a story about a young girl, Parasha, who disguised her sweetheart as a cook, Mavra. It was born as Pushkin’s response to the criticism that he did not write “serious” works, glorifying the Russian army. Taking his cue from Pushkin, Stravinsky also gives an ironic and grotesque interpretation of the story. The four characters of the opera are easily recognized personages of observational comedies: a sentimental young lady, dreaming about a suitor; a hussar with a penchant for amorous escapades; a mother and a neighbour's wife – newsmongers who are afraid of everything and, most of all, of being fooled (and that’s exactly what happens to them). What musical means should be used to enhance the comic effect? Of course, putting various 19th-century intonations (tunes from the operas A Life for the Tsar and Evgeny Onegin, a gypsy romance and vaudeville songs) into a new system of relations — the 20th-century music where the familiar connection between a melody and the accompaniment is broken and they are blended together using the principle of deliberate mismatch. Stravinsky’s score creates an impression that Mavra is accompanied by a military wind band, playing somewhere in the street, boulevard or in the garden outside the windows of the proverbial The Little House in Kolomna.

The production of the Primorsky Stage has also followed the path of Pushkin and Stravinsky, offering a solution in the spirit of celebrated Russian vaudevilles with dressing up in clothes of the opposite gender. In this production, the originally vaudevillish opera is presented as a little comedy with music – a predecessor of the operetta and the musical. Musical scenes in it are interspersed with spoken monologues, using the text from The Little House in Kolomna which were not included into the libretto. They are performed by an actor, made up to look like Pushkin, who introduces and comments on operatic events and sometimes acts like a direct participant of the stage action. There is also another additional character that is absent in the composer’s version — a ballerina, who also helps illustrate certain storyline moments (for example, the dance of a gypsy girl the hussar is singing about). The scenic design of the performance, as laconic as the opera itself, demonstrates a combination of the 20th century style and elements of modern life, similarly to the method used by Stravinsky. It is also important that the tasks the little opera sets for the soloists are, by no means, little. Not only should the performer be both a singer and an actor, but one should also be able to cope with difficult vocal parts and create an impressive, colourful image during a short period of being on stage.

Premiere at the Primorsky Stage of the Mariinsky Theatre: 17 February 2018, Vladivostok