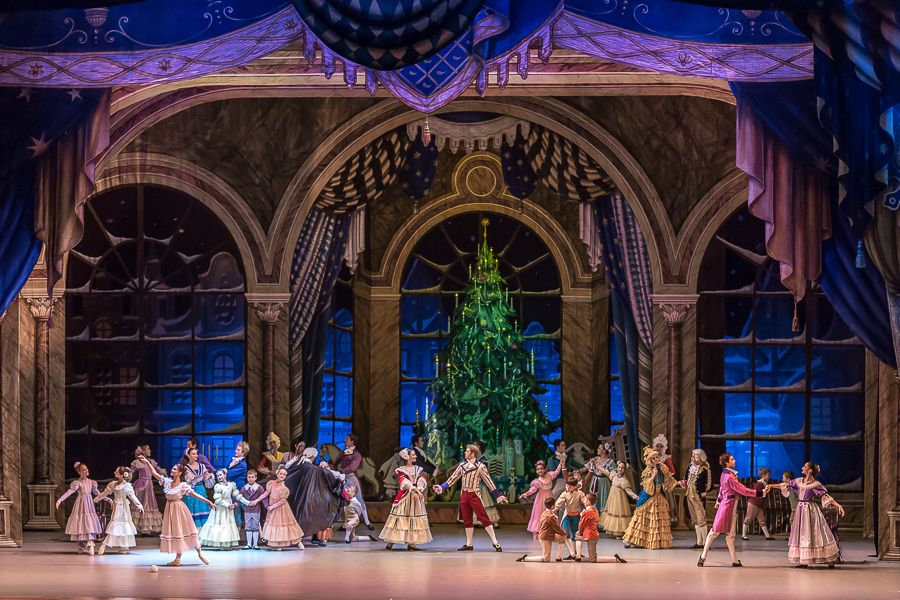 Prologue
Christmas is coming, a time for magic. The old storyteller and toy maker Drosselmeyer has thought up a most wonderful and important story for this holiday; a story of good and evil, jealousy and self-sacrifice, love and friendship, and how time and time again everything in the world is reborn.

Act I
Guests are arriving for a Christmas party in the home of the Stahlbaum family. Masha, Herr Stahlbaum’s young daughter, is having fun with the other children. Drosselmeyer arrives at the party and the children instantly surround him. Drosselmeyer tells a story about the beautiful Sugar Plum Fairy and the Prince who is in love with her that the evil Mouse Queen has separated. Her curse, which has turned the Prince into an ugly Nutcracker, cannot be broken until somebody nobly comes to his aid. Dolls help the old man recount the tale of the Nutcracker. The children thank Drosselmeyer and then run off. Only Masha stays close to the wooden Nutcracker. The old man continues the story for her, but Masha’s brother, the prankster Fritz, gets over excited and breaks the Nutcracker. Masha is distraught. Drosselmeyer soothes her by bandaging the broken arm of the dear Nutcracker.

The guests leave. The door has barely shut behind the last guests when the entire room is inundated by mice. The son of the Mouse Queen has brought his lieges to deal with the Nutcracker. Masha, running into the room, tries to defend her new friend. Drosselmeyer comes to help her and the mice are forced to retreat. Drosselmeyer explains to Masha that she has not simply entered the story but now the story ending depends on her. Meanwhile, the Mouse King has brought his troops into battle. His opponent is the Nutcracker, stands at the head of a troop of tin soldiers. First one side then the other is close to victory. Suddenly the Mouse King has contrived to undo the Nutcracker; he is poised to plunge when Masha rushes to the rescue. She throws a lighted candle at the Mouse King. Immediately the hordes of mice disappear and a handsome Prince appears in place of the ugly Nutcracker. The curse is broken and the Young Prince invites Masha to the Kingdom of the Sweets.

Act II
A magic boat delivers Masha and the Prince to the castle of the Sugar Plum Fairy in the Kingdom of the Sweets. All the inhabitants of this land had become frozen when the Mouse Queen’s curse fell on the Prince and the Fairy, but now the curse has been lifted and the castle is once again full of joy and laughter. Masha is greeted by the King, the Queen and their many friends. A Spanish dance is succeeded by an Arabian dance, a Chinese dance by a dazzling Russian dance. The culmination of the festivities is a duet by the Prince and the Sugar Plum Fairy dedicated to love and loyalty. Masha dances with the guests, the Fairy and the Prince.

Epilogue
A candle burns on the table of the toy maker. In the living room, curled up in a chair, asleep next to the toy Nutcracker is Masha. The story is over and very soon it will be replaced by another.

Running time: 2 hours and 10 minutes
The performance has one interval