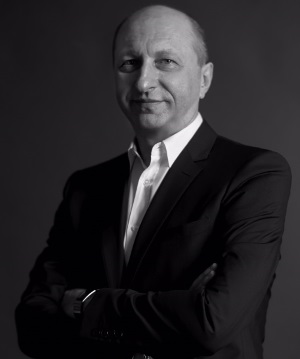 Eldar Aliev, Ballet Artistic Director of the Primorsky Stage of the Mariinsky Theatre, Honored Artistic Creator of Russia, was born in Baku, Azerbaijan, where he graduated from the Baku Choreography Academy and later he graduated from the Pedagogical Department of the Russian Ballet Academy (Vaganova Academy) in St Petersburg, Russia. Between 1979-1992, he was a principal dancer in the Kirov (Mariinsky) Ballet, where he proved to be not only a technically outstanding classical and contemporary dancer but a talented interpreter of the roles he performed. His repertoire included leading roles in Don Quixote, The Legend of Love, Le Corsaire, Swan Lake, La Bayadère, Spartacus, and many more.

Aliev’s touring career spans over 40 countries and some of the most prestigious stages: the Kennedy Center in Washington, D.C.; the Metropolitan Opera in New York City; Opéra National de Paris; Teatro dell'Opera in Rome; Teatro alla Scala in Milan; the Royal Opera House and the Coliseum in London; the Berlin State Opera; Palacio de Bellas Artes in Mexico City; Teatro Colón in Buenos Aires; the Sydney Opera House; and others. His solo career also includes performances as a guest artist of the Bolshoi Ballet and the Australian Ballet.

In 1992, Aliev began his career in the United States, where he was invited to be a principal dancer at Ballet Internationale (Indianapolis Ballet Theater). As artistic director, he turned the only ballet company in Indiana into a world-class professional company that performed before delighted audiences in Los Angeles, New York, Montreal, Beijing, Taipei, and many other cities. From 1992–2005, under Aliev’s direction, Ballet Internationale presented more than 30 productions, including his own versions of 1001 Nights (F. Amirov), The Nutcracker and Sleeping Beauty (P. Tchaikovsky), The Firebird (I. Stravinsky), Le Corsaire and Giselle (A. Adam), Don Quixote (L. Minkus), and others.

In 1996, Aliev was awarded Indianapolis Business Journal’s “Forty Under 40” prize, recognizing the 40 best leaders in the state. For his contribution to the development of arts in the United States, Aliev was given a special award by the Governor of Indiana, and the 21st of June was pronounced by the Mayor of Indianapolis to be Eldar Aliev Day.

Since 2006, Aliev has worked as guest consultant, coach, ballet master, and choreographer with leading companies and academies of Europe, Asia, and America, including Royal Swedish Ballet, Slovak National Ballet, National Ballet of China, National Ballet of Canada, Cincinnati Ballet, Universal Ballet (Korea), Hong Kong Ballet, Beijing Dance Academy, Teatro Massimo (Italy), and Spanish National Dance Company. Aliev has also acted as artistic director of the Hungarian National Ballet and the Boston Ballet School, and has given lectures at Harvard University and Vassar College. He was a jury member of international ballet competitions in Prague, Seoul, New York, and Beijing; and in 2014, was elected deputy chairman of the jury at the Varna International Ballet Competition.

The creative destiny of Eldar Aliev developed just as ballet and theater critic Clive Barnes predicted when he wrote in the New York Post: "[It] is a rare versatility and the ability to dive into the depth of role that makes Eldar a truly exceptional artist, [who] will greatly contribute to the development of dance in this country."

In 2015, Aliev was appointed Artistic Director of Ballet at the Primorsky Opera and Ballet Theatre and stayed on in that role when the company was renamed as the Primorsky Stage of the Mariinsky Theatre in 2016. That same year, Aliev was awarded the title of Honorary Professor of the Shenyang Conservatory of Music (China) in the field of dance, and in 2017 he was awarded the Honorary Diploma of the Legislative Assembly of the Primorsky Territory and the Diploma of the Minister of Culture of the Russian Federation. Since 2021 Eldar Aliev has been Ballet Artistic Director of the Primorsky Stage of the Mariinsky Theatre.

Currently, Aliev combines his work as Ballet Artistic Director with choreography and teaching engagements throughout the world.

In 2022 Eldar Aliev was awarded the title of laureate of the Soul of Dance prize in the Knight of Dance nomination.