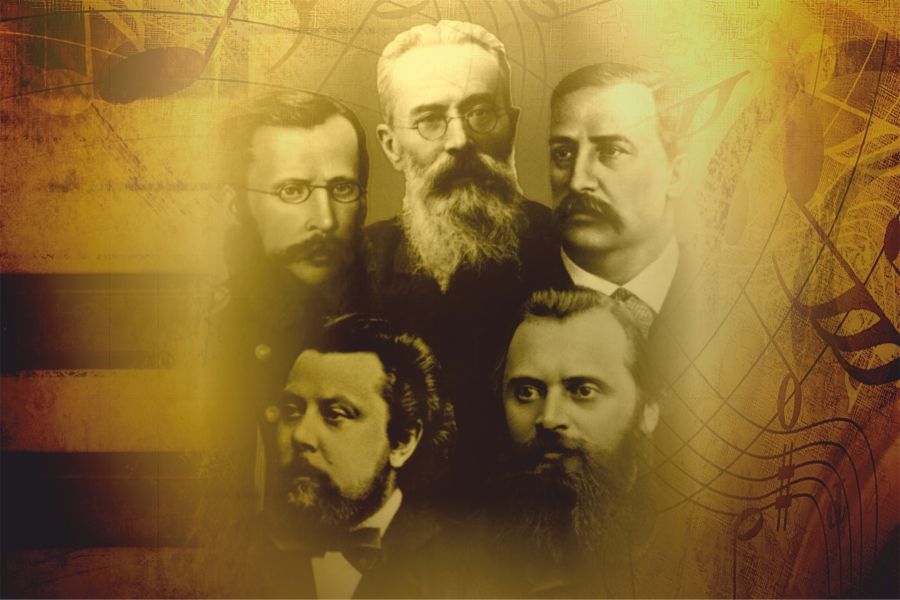 Сomposers of The Mighty Five

Alexander Borodin
The Sea (lyrics by A. Borodin)

Modest Mussorgsky
Where are you, little star? (lyrics by N. Grekov)

In the middle of 19th century, Russia sees a rise in nationalist and democratic sentiment, leading to emergence of new progressive trends and phenomenon in all kinds of art. A group of young men with a passion for music unites around Mily Alexeyevich Balakirev, a gifted composer and pianist, a charismatic “thought leader” with firm musical principles, involving further development of Glinka’s democratic traditions, creating art based on Russian national themes and peculiarities of folk culture.

At first, being the only professional musician in the group, Balakirev acted as a mentor to his friends and encouraged their amateur compositional efforts, however, soon, each of them developed into an established creative personality. Meanwhile, Alexander Porfiryevich Borodin was an academician of the Imperial Medical Surgery Academy and pursued a successful career in chemistry; Cesar Antonovich Cui made a brilliant career as a military engineer, where he rose to the rank of engineer-general, and eventually attained an academic status of professor of fortifications; Nikolai Andreyevich Rimsky-Korsakov was a navy officer; Modest Petrovich Mussorgsky was a military officer, however at the age of 19 he resigned from the military to devote himself to music. A very important role in activities of the Balakirev’s group was played by the great Russian critic Vladimir Vasilievich Stasov. It was he who had first coined the expression “the mighty handful” in his newspaper article: “...how much poetry, feeling, talent and intelligence are possessed by a small but already mighty handful of Russian musicians”. Later, the expression became very widespread and attributable to the group along with the Five and the Mighty Five

Although the focus area of the Balakirev’s group was opera, they made a considerable contribution to the development of all genres of Russian music, including the genre of chamber ensemble. One of the gems of Russian instrumental music is Borodin’s Quartet № 2, which he devoted to his wife - a faithful friend and a wonderful pianist. From the first sounds the listener is captivated by a soft charm, purity and delicacy of the Quartet music. The melodic beauty reaches its peak in the third movement - Notturno, as if wrapped in silvery moonlight. The second, Scherzo (a joke), and the fourth movements of the Quartet bring in liveliness, humour and playfulness.

The quintet for piano and winds by Rimsky-Korsakov is very complicated technically and demonstrates the composer’s highest level of mastery. At the same time, all three parts are stylistically different: the first movement is composed in the classic style of Mozart, the second is romantic with a fugue on a theme of Russian folk songs in the middle, and the finale overwhelms by its brilliant virtuosity.

The romances performed at the concert — Where are you, little star? by Mussorgsky, composed in the style of a folk song, the Sea by Borodin and his coquettishly playful The Beautiful Fisherwoman, Balakirev's passionate Embrace Me, Kiss Me and You Are Full of Enchanting Delight; elegiac reminiscences about the lost love The Dry Flower by Rimsky-Korsakov, Desire by Cui and his rousing Bolero will be illustrative of the rich variety of content and enthralling melodic beauty of vocal music by Russian composers.