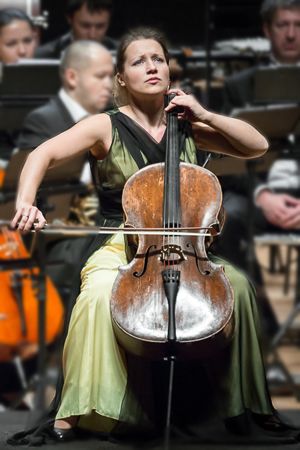 Elizaveta Sushchenko was born in 1985. At the age of eight she made her debut at the Bolshoi Theatre with the Bolshoi Theatre Symphony Orchestra under the conductor Alexander Lazarev. At the age of thirteen she recorded her first CD with the Melodiya studio. In 2003 she graduated with distinction from the Moscow Gnessin Middle Special School (College) of Music. In 2007 she graduated from the Moscow State Tchaikovsky Conservatory (class of Natalia Shakhovskaya).

In 1998 the cellist undertook her first tour of Japan. During that tour, Elizaveta Sushchenko gave recitals and performed with a symphony orchestra at Suntory Hall, Suginami Kokaido Hall (Tokyo), Minato Mirai Hall (Yokohama) and Izumi Hall (Osaka). In 2000, 2002 and 2007 Sushchenko once again toured to Japan.

Has taken part in master-classes given by Heinrich Schiff, Mstislav Rostropovich and David Geringas. Has performed with the MAV Symphony Orchestra under Erwin Lukac in Budapest and the Moscow Soloists orchestra in Munich. Has toured throughout Russia, Germany and Austria.

Since 2014 she has been leader of the cello section with the Primorsky Opera and Ballet Theatre Symphony Orchestra.

From 2008–2010 she undertook post-graduate studies at the Universität für Musik und darstellende Kunst in Vienna and was an assistant to Reinhard Latzko. In 2010 she entered the Russian Gnessin Academy’s faculty of conducting (class of Vladimir Fedoseyev). Since 2013 she has taught at the Moscow University of Culture and Arts.

Since 2016 she has been a leader of the cello section of the Mariinsky Orchestra of the Primorsky Stage.