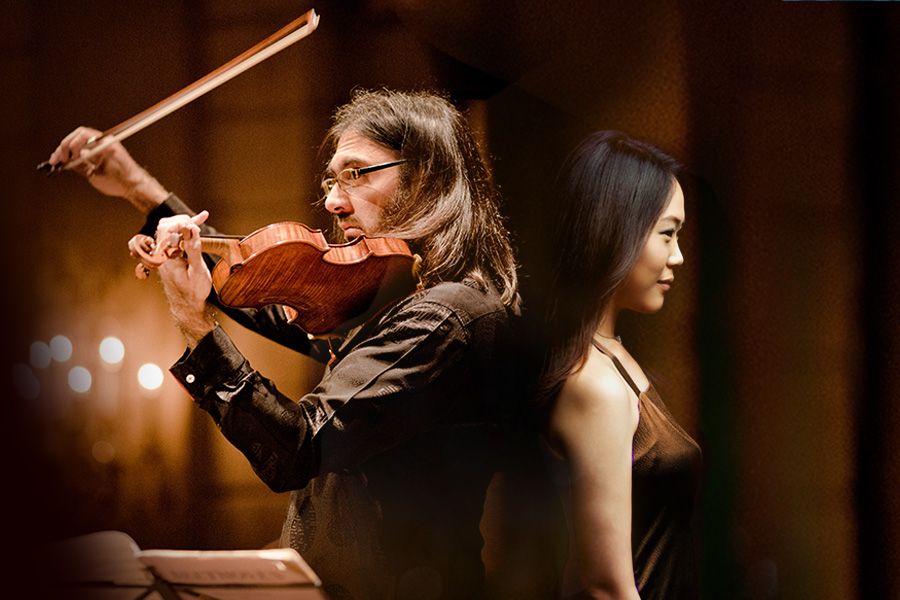 Piano Concerto No 2 was one of Sergei Prokofiev’s favourite works. The composer first performed it at the end of the summer season in 1913 in Pavlovsk (when it was conducted by Alexander Aslanov). The premiere was accompanied by a “glorious” scandal: Prokofiev was labelled as both a cubist and a futurist. And he immediately composed a “cubist-futurist” and incredibly complex piano concerto as his calling card: he performed it in London for Diaghilev when they first met, and he selected it for his official debut abroad in Rome in 1915. When Prokofiev emigrated, the score remained in Russia (and has never been found to this day). In 1923 the composer revived it and soon had the concerto published. Today it is hard to understand what could have scared away audiences in the bewitching first section. Could it be the massive cadenza of the soloist that slowly approaches its culmination, so complex that it is written over three lines (as if for three hands)? The second section, a scherzo, is one of the finest pieces in the “perpetuum mobile” genre. The piano part does not have one single pause! The start of the third section, an intermezzo, deserves the title of “futurist,” although the soloist performs a refined and fantastical theme. And the stormy, unbridled start of the finale is wisely balanced by the gentle middle section in the character of a nursery rhyme.

In 1923 Prokofiev’s travels took him to Paris, the capital city of 20th century European music. French audiences were already familiar with his works: at his concerts Prokofiev had eagerly performed the music of another émigré – Serge Koussevitzky, who following the Russian Revolution took his stormy concert and printing activities to Europe and America.

Under Koussevitzky’s baton there were performances of Seven, They Are Seven, Scythian Suite, the First Violin Concerto and the Second Piano Concerto, and later came highlights from the as yet incomplete The Fiery Angel. On arriving in Paris, Prokofiev, delighted by the response of the public which was not afraid of the natural and Scythian music, decided to compose his symphony As Hard as Iron and Steel. It was concluded in 1925 following “nine months of frenzied toil” which was dedicated to Koussevitzky, who performed it on 6 June that same year. The result of the long and intense work proved too complex even for Parisian audiences and the premiere met with a cool response. The symphony has remained one of Prokofiev’s most rarely performed works.

The second symphony has an unusual construction – it consists of just two movements. The First is a sonata allegro in the “iron music“ that one can hear in Stravinsky and the urbane French Le Six and the music of Prokofiev himself, shortly after completion of the ballet Le Pas d’acier which was acclaimed for its constructivism. The second movement is in the form of variations. After all the dissonant accumulations of the first movement, their theme is distinctly simple and diatonic. Prokofiev wrote it in Japan in 1918. In the six subsequent variations following the theme, the theme itself becomes at times mockingly humorous, at times peculiar, at times otherworldly lyrical, at times with fearful culminations bringing back to mind images of the first movement. The coda, in which the theme resounds in its initial form, brings peace and resolution.

Johannes Brahms' Violin Concerto in D Major was completed in summer 1878 and first performed on the first day of 1879 at Leipzig's Gewandhaus; the orchestra was conducted by Brahms himself, and the solo performed by Joseph Joachim, to whom the piece is also dedicated.

The history of Brahms' friendship with Joachim began in 1853 at the house of Robert Schumann, where the as yet almost unknown twenty-year-old composer met the brilliant violinist, a mere two years older than himself but already known to many outstanding musicians. With his stunning violin technique, Joachim was not too transfixed by demonstrative virtuosity, in his play placing greater emphasis on exposing the inner nature of the work, its lyrical qualities. Brahms, who was himself sceptical of outward glitter, could not but be drawn by such a feature of the violinist's nature. The Violin Concerto is one of the most vivid pieces of evidence of their collaboration and one of the most complex works in the violin repertoire. Johannes Brahms, who was a great pianist but had a somewhat cloudy concept of the particular nature of violin technique, nonetheless created a work that presented a series of new, for the time, and highly complicated performance problems. The violinist faces the most exacting demands regarding harmony playing, the ability to cover large intervals, confidence in moving to a higher register. Regarding all matters of violin technique, Brahms turned to Joachim, but, interestingly, almost never followed him. To all the violinist's objections and requests to remove the greatest difficulties from the violin part, the composer responded with insignificant changes essentially regarding the finish of the details. Subsequently, Joachim performed Brahms' Violin Concerto often, and in this he was followed by other renowned violinists of the age in turning to this masterpiece. Just like Beethoven's Violin Concerto, which greatly influenced Brahms, with the soloist and orchestra appearing as equal partners. Despite the immense difficulties of the solo part, the audience never has the sensation that virtuosity is there especially for show. Brahms' Violin Concerto is filled with stormy pathétique and beautiful lyricism with a light shading of melancholy. The work, typically for the concerto genre, comprises three movements: the well-developed Allegro, intense in symphonic feeling, the dreamy, radiant Adagio and the energetically forceful final rondo. The principal theme of the finale draws to mind boisterous Hungarian song, a kind of hint at Joachim's Hungarian blood and, at the same time, a tribute to the use of Hungarian gypsy melodies. At the very end of the life-affirming, triumphant finale, Brahms introduces several contemplative, tempered accords - like a unique and special signature of the composer, inwardly always alone and at odds with the rowdy celebration of life.