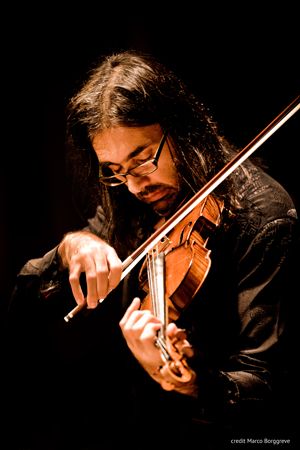 Kavakos played like a dream eliciting an almost physical pleasure from the trueness of his intonation and the way in which certain phrases, certain chords landed.

The Independent
Violinist and Conductor

Born and raised in a musical family in Athens where he still lives, Kavakos’ first steps as a violinist were guided by his parents. He studied at the Hellenic Conservatoire under Stelios Kafantaris, one of the three important mentors in his life together with Josef Gingold and Ferenc Rados.

By the age of twenty-one, Leonidas Kavakos had already won three major competitions — the Sibelius Competition in 1985, and the Paganini and Naumburg Competitions in 1988. This success led to his recording the original Sibelius Violin Concerto (1903-04), the first recording of this work in history. It won the Gramophone Concerto of the Year Award in 1991.

Kavakos has developed close relationships with the world’s major orchestras and conductors, among them the Wiener Philharmoniker (Eschenbach and Chailly), the Berliner Philharmoniker (Rattle), the Royal Concertgebouw Orchestra (Jansons and Gatti), the London Symphony Orchestra (Gergiev and Rattle) and the Gewandhausorchester in Leipzig (Chailly). Kavakos also works closely with the Dresden Staatskapelle, the Bayerischer Rundfunk, the Munich Philharmonic, the Budapest Festival Orchestra, the Orchestre de Paris, the Accademia Nazionale di Santa Cecilia, the Orchestra Filarmonica della Scala and in the USA, with the Philadelphia Orchestra, the New York Philharmonic, the Boston Symphony, the Chicago Symphony and the Los Angeles Philharmonic Orchestras. In 2014-15, Kavakos opens the LSO International Violin Festival and will be Artist in Residence with the Royal Concertgebouw and National Symphony Orchestras.

Kavakos’ first release on Decca Classics, the complete Beethoven Violin Sonatas with Enrico Pace, resulted in the award of “Instrumentalist of the Year” at the 2013 ECHO Klassik awards. His second disc (October 2013) was the Brahms Violin Concerto recorded with the Gewandhausorchester Leipzig and Riccardo Chailly, and the third disc – Brahms Violin Sonatas with Yuja Wang – was released in spring 2014. Kavakos and Wang tour this season to London’s Barbican Hall, Amsterdam’s Concertgebouw, Carnegie Hall, Barcelona, Madrid, Salzburg’s Mozarteum and the Vienna Musikverein.

Following the Sibelius and other early recordings for BIS and ECM, Kavakos recorded Mozart’s five Violin Concerti and Symphony No 39 in concert for Sony Classical, conducting and playing with the Camerata Salzburg. He subsequently recorded the Mendelssohn Violin Concerto, again with the Camerata Salzburg, for which he received an ECHO Klassik “Best Concerto Recording” award in 2009.

Kavakos has always retained strong links with his native Greece. For fifteen years he curated a chamber music cycle at the Athens Concert Hall (the Megaron) which featured some of his close musical friends including Mstislav Rostropovich, Heinrich Schiff, Emanuel Ax, Nikolai Lugansky, Yuja Wang and Gautier Capuçon. For the past three years Kavakos has curated an annual violin and chamber music master-class in Athens, attracting violinists and ensembles from all over the world and reflecting his deep commitment to the handing-on of musical knowledge and traditions.

Leonidas Kavakos is passionate about the art of violin and bow-making, both of the past and the present, which he considers a great mystery and, to our day, an undisclosed secret. He plays the “Abergavenny” Stradivarius violin of 1724 and owns modern violins made by Florian Leonhard, Stefan-Peter Greiner, Eero Haahti and David Bagué.