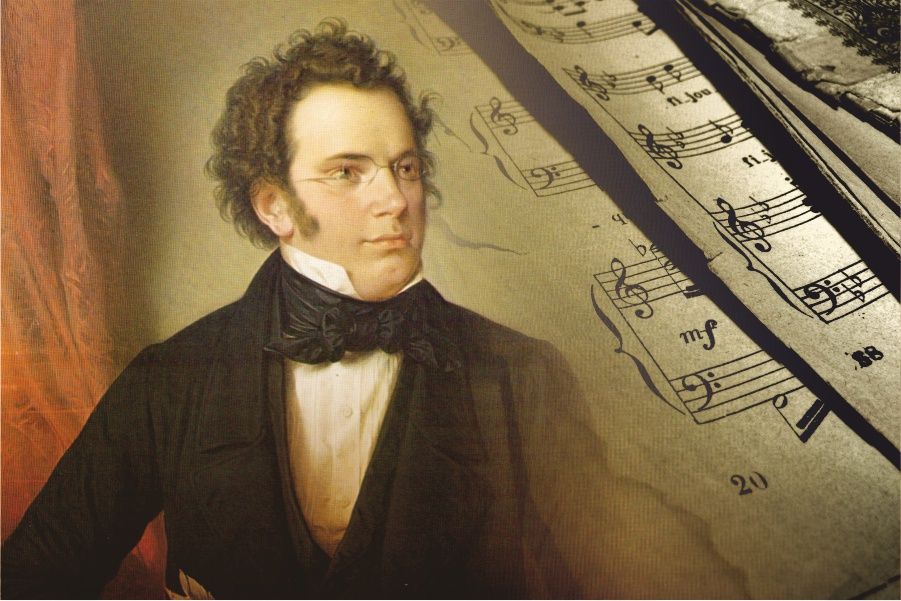 Franz Schubert’s works (1797–1828) opened a new musical world focused on subtle and diversified conveyance of human feelings and emotions. A little later this artistic movement began to be referred to as romanticism, after the main literary genre of that time – “a roman”. Schubert lived an uneasy life of an artist, who was of no interest to the high and the mighty but the love and recognition of ordinary people warmed the cockles of his heart. Having composed 9 symphonies, about 20 piano sonatas, 15 quartets, he worked with unseen creative fantasy and enthusiasm in his principal genre and wrote over 600 songs.
Schubert’s vocal legacy is incredibly diverse – from simple folk-like songs to sophisticated expanded compositions. Die Forelle is a delightful, ethereally limpid watercolour with a stroke of sadness, concerning the fish caught by the author. Cool sparkles of the piano accompaniment evoke the vision of a crystalline, iridescent currents.
Barcarolle is another evidence of the richness of Schubert’s musical palette and diversity of its colours. In Italian interpretation, barcarolle not only reflects a rhythmic, mesmerizing glide of a boat but also creates a feeling of calm, oblivion and happiness. This one of the most beautiful Schubert’s songs almost hypnotizes with its sweet melody and smooth accompanying piano figurations.
The famous Serenade fascinates with its thoughtful, elegiac nature, which for a long time patiently shields intense sensuality.
The piece Auf Dem Strom is enriched by the texture of French horn. The music is imbued with disquiet and a gloomy mood: a young man is devastated to leave his sweetheart but sets on a risky boat trip with unknown perils held in store for him by the raging torrent, while the days of delight are left behind forever.
Arpeggione is a bow stringed musical instrument, which was invented in 1823 and combined features of both a cello and a guitar. Soon after its invention, in 1824 Schubert wrote the Sonata in E-minor for Arpeggione and Piano. However, a decade later the enthusiasm for the instrument vanished and since then Schubert’s Sonata has been heard in transcriptions for cello and viola.
The Trout Quintet (Das Forellenquintett) was named after the Schubert’s earlier song Die Forelle, which provided a theme for the fourth movement. The Quintet music is filled with joyful energy of a young soul, which believed that the life is cloudlessly beautiful. Contrary to the tradition, in this Quintet there is not a single slow movement – each one is bursting and humming with the happy dynamics of life. The first part overwhelms with its non-stoppable, gusty movement, the sweet inspiration of which is sometimes overshadowed by regrets and slight doubts. In the second movement, the dreamy aria gives way to excitement, disquiet changes into the marching rhythms. The third movement is built around the contrast between a spinning perpetuum mobile (perpetual motion) and thoughtful contemplation. The fourth movement is a set of variations on the song Die Forelle, which acquires various intonations – energetic, intensely dramatic, mischievously coquettish. The lively final dance resembles joyful folk tunes of Upper-Austrian peasants.