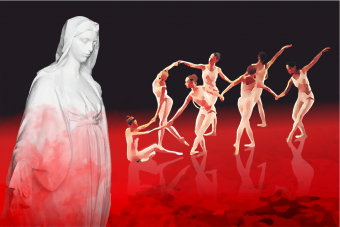 The Ballet Company of the Primorsky Stage of the Mariinsky Theatre expects you to attend the Evening of modern European choreography that comprises two one-act ballets by outstanding choreographers of the 20th century, namely: Le Jeune homme et la mort by Roland Petit set to music by Johann Sebastian Bach and Phaedra by the Danish choreographer Flemming Flindt set to music by Philip Glass, a famous American composer. The ballets will be premiered on November 12 and November 13, 2021.

Le Jeune homme et la mort with the libretto written by Jean Cocteau is well known to Russian spectators. Staged in 1946 in Paris, the ballet became one of the most well-known works of Roland Petit, an established classic choreographer of the 20th century, and one of the most sought-after ballets by dancers of different generations. The choreographer initially created the dancing routines to a popular jazz song, but just before the premiere Jean Cocteau suggested changing the music to Passacaglia by Johann Sebastian Bach. Thanks to the Passacaglia, the theme of an artist’s conversation with death, which is raised in the ballet, has acquired dimension and scope. Almost everyone in post-war Europe could subscribe to Jean Cocteau’s words: “I have experienced such painful periods that death seemed a temptation. I’m used to not being afraid of her and looking straight into her face”.

The production is choreographed by Maxim Khrebtov, a Repetiteur of the Mariinsky Theatre, with Luigi Bonino who was an assistant to Roland Petit for many years. The American designer Barbara Karinska acted as a Costume Designer.

Another premiere is to be Phaedra one-act ballet that will first be represented in Russia. The ballet music was written by Philip Glass, one of the most famous American composers and one of the most influential musicians of the later 20th century. He has created soundtracks for fifty popular movies. In Dallas, Texas in 1986 the ballet was choreographed by Flemming Flindt, a legendary Danish dancer and choreographer who was at that time inspired by characters of Euripides’ Greek drama, and tailored the ballet for his wife Vivi Flindt, a Danish ballet dancer.

From the ancient times the one-way love tragedy has always been attractive for a lot of authors. Euripides was one of the poets who originally described the palette of conflicting emotions felt by a married woman towards a young man and the following tragic ending. The plot focuses on Phaedra’s longing for her stepson. Phaedra reveals her love for Hippolytus to be rejected by him. This leads to a tragic ending.