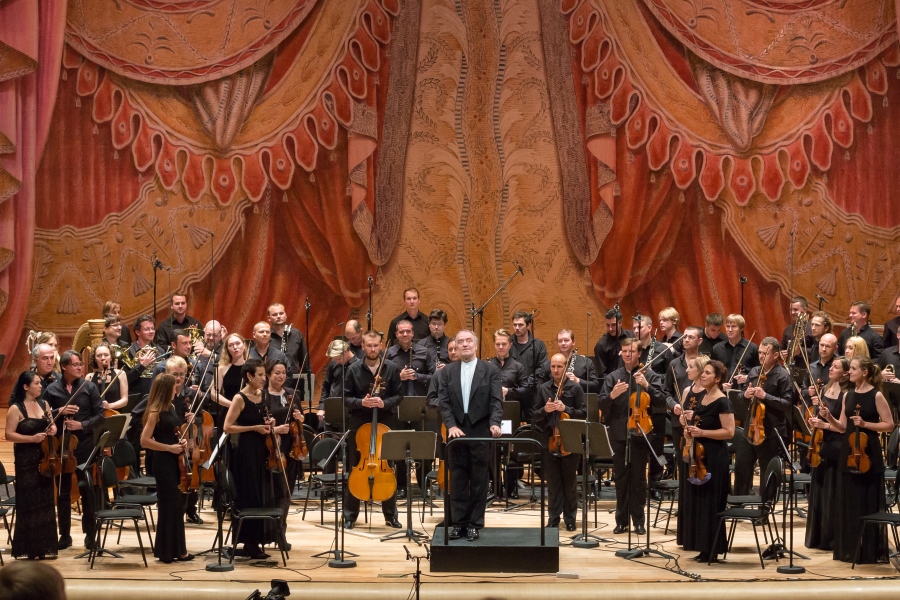 This is a story of two households – the seemingly respectable aristocratic household of the Prince, and the household run by Kuma, devoted to pleasure and freedom. The first household is highly emotionally dysfunctional, but the second is a serene environment controlled with grace and charm by its proprietress, Kuma.

Act I
The men are gathered at Kuma’s house where she bewitches them with a serene song about the wide flowing Volga. They are interrupted by the sudden announcement that the Prince is mounting a raid on the house, under the leadership of Mamyrov, his puritanical and straight-laced Minister. But the Prince is surprised to find that proprietress of this seemingly dissolute establishment is in fact a beautiful, dignified woman. The Prince is charmed, and Mamyrov’s puritanical admonitions are ignored, to the extent that the Prince humiliates him by ordering him to dance before the entire company.

Act II
The Princess is grief stricken by the fact that her husband The Prince has abandoned her. She demands that Mamyrov tell her the truth, and he reveals that the Prince is spending all his time at Kuma’s house. She swears to have revenge, and orders Mamyrov to find out all the details of the Prince’s infidelity.
Her adoring son Yuri is very disturbed by the fact that his mother is evidently so unhappy, but she refuses to tell him the reason.
Mamyrov bribes the corrupt Priest Paisi to spy on Kuma.
The Prince reflects on the fact that his obsession with Kuma is destroying his family. But left alone with the Princess to discuss his son’s marriage, their conversation breaks down into a terrible argument, with the Prince threatening physical violence.
An angry mob breaks into the palace, demanding redress from the extortionate taxes that Mamyrov is exacting. The young prince Yuri calms them down and persuades them to leave. Mamyrov takes this opportunity to reveal to Yuri that it is Kuma who is responsible for his mother’s misery, and Yuri resolves to kill his father’s mistress.

Act III
At Kuma’s house, the old Prince attempts to persuade Kuma to succumb to his desires with promises of luxurious gifts, but this only disgusts her and she repulses him. He threatens violence against her, but her independent spirit prevails and he leaves. She learns that Yuri is coming to murder her, but nonetheless decides to receive him, as she has long nurtured powerful feelings for him. When his murderous attempt fails, she is gradually able to win him round. Together they rejoice in their newly discovered passion.

Act IV
Paisi guides the Princess to a magician who can provide a deadly poison which she intends to inflict on Kuma. Kuma is intending to run away with Yuri, as his father has determined to kill her. The Princess, in disguise, offers her refreshment, and Kuma drinks the poison. She is briefly united with Yuri, but the poison starts to take affect, and the Princess reveals her identity. Yuri finds himself torn between his mother and his lover, Kuma. Kuma dies. His father finds them, and demands to know what has happened to Kuma. When his son defies him, the old Prince kills him, and then himself descends into a delusional state of violent madness.

Two intertwined love triangles, jealousy, unfaithfulness, revenge, escape, sorcerer, poison, two murders, one madness and a threatening thunder at the close: The Enchantress has it all. It can boast a full spectrum of tried and tested tricks of the 19th century Romantic opera. The Enchantress was written by a great composer, who was at the peak of his creative genius at the time, and a popular playwright, who made his debut as a librettist. These circumstances have defined the opera’s contours; its score is brilliant from ouverture to the finale, while the writing sometimes lacks in skill. People, their feelings and relationships are described vividly, thoroughly, and masterfully; however, the situations they find themselves in often seem too melodramatic to the spectators, especially modern ones. This feature of The Enchantress has affected its not-so-joyous life on stage. Despite the fact that musically it is in no way inferior to either Eugene Onegin, which was written almost a decade earlier, or The Queen of Spades, created three years later, The Enchantress is a rare guest on the operatic stage. The current performance of The Enchantress at the Mariinsky Theatre is the first one following a decade-long break. The Enchantress was Tchaikovsky’s favorite brainchild. It took the composer two years of hard work (from 1885 to 1887) at the picturesque Maidanovo house, where he had lodgings, to finish the opera. Tchaikovsky’s correspondence and diary preserved every step of this work, which at different times made the composer elated or reduced him to a nervous wreck. He did not have a complete libretto as Ippolit Shpazhinsky sent it in parts, which Tchaikovsky would analyze and then present his recommendations. The world premiere took place on 20 October 1887 at the Mariinsky Theatre; the composer himself conducted the first four performances. The greatest singers of the Mariinsky Theatre appeared in lead roles, including Ivan Melnikov (Grand Prince), Maria Slavina (Princess, his wife), and Fyodor Stravinsky (Mamyrov). The opera was not a success; a total of twelve performances were given at the theatre. Tchaikovsky was greatly shaken and rattled by this failure; he wrote to Nadezhda von Meck: “I am still convinced it is my best work. Meanwhile The Enchantress is laid aside to collect dust in the archives.” Indeed, The Enchantress should not be laid aside, but rather performed on modern stage. Love and freedom – its two main themes – belong to the category of eternal ones. The Enchantress amounts to a treatise on different kinds of love. Kuma’s love for the Prince is a transforming, passionate, and all-encompassing love of a young independent woman. The Prince’s love for Kuma is a young man’s first passionate feeling, which leads him to almost completely disown his parents. The Grand Prince’s love for Kuma is an animalistic, tormenting, suffocating passion of an aged and severe man, who is not adverse to violence. The spousal love between the Grand Prince and Princess is destroyed by his lustfulness and her vengeful jealousy. The Grand Princess’ motherly love for the Prince turns her soul inside out; in the last moments we see this “fanatic aristocrat” (Tchaikovsky) as a grieving mother, who mourns the loss of her child.
The theme of love is almost always closely linked to the theme of freedom. The symbol of freedom in The Enchantress is Russian landscape, those boundless and vast spaces, where Kuma sings she wants to fly free as a bird. Longing for freedom permeates the entire opera. Kuma’s house, which stands where the Oka River flows into the Volga, attracts the visitors with its spirit of freedom, both literally and figuratively. The love between Kuma and the Prince can survive only in total freedom – both from societal hierarchy and his parents’ self-will – and that is why they escape, using the great river as their ally. On the contrary, absence of freedom leads to violence, to which the Grand Prince resorts as a slave to “love,” and the Princess and Mamyrov – as slaves to “honour.”
“The listener/spectator will leave the theatre staggered, yet reconciled and satisfied,” wrote Tchaikovsky to Shpazhinsky about their work. The Enchantress does the same for the modern spectators as well.
Khristina Strekalovskaya


Running time: 3 hours 40 minutes
The concert has one interval