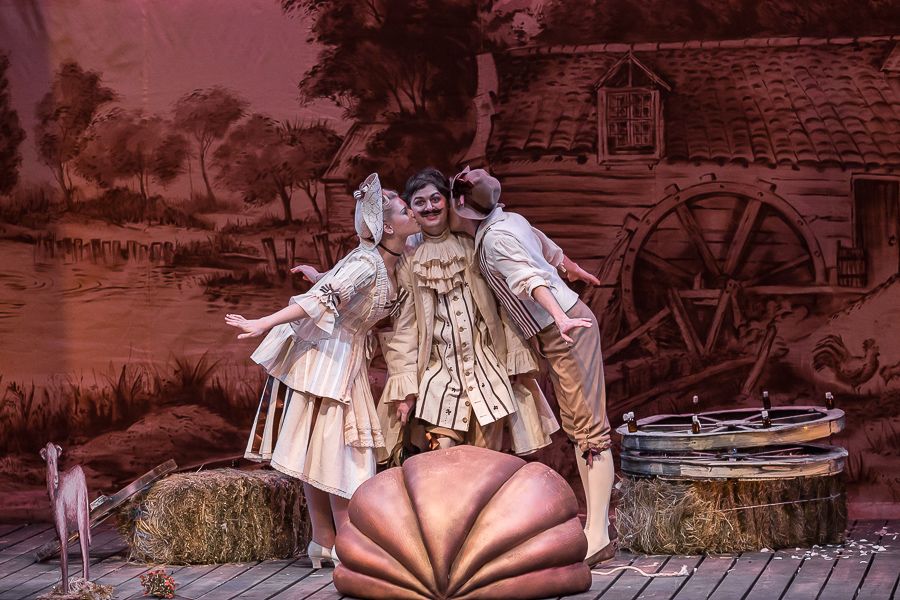 A village meadow. Bastienne, a shepherdess, fears that her sweetheart Bastian has forsaken her: he has not appeared on the meadow for several weeks.

Colas, the village soothsayer, approaches her. He comforts Bastienne that she will forget the weathercock as soon as she drinks the break-up potion. However, the Colas realizes that no magic can do this and decides to make the lovers reconcile.

The careless Bastien appears. The magician tells him that his girlfriend has been proposed by a metropolitan gentleman. Bastian is distraught and asks for the break-up potion which the soothsayer prepares then right on the spot. Colas recites a magical incantation: “Digy-dugy, rumpy-pumpy, hurum-harum, lirum-larum…” Bastienne returns. The lovers demonstrate coldness, vehemently sneer at each other and are ready to part forever. Hoping to cure themselves from love, they drink the magic potion made by the soothsayer but, finally, they agree to reconcile.

The one-act singspiel Bastien und Bastienne is a charming creation of child-prodigy written by him when he was just 12 years old. In 1768 the wunderkind was living in Vienna and attended the premiere of Jean-Jacque Rousseau’s comic opera Devin du village (Village Sorcerer), which enjoyed great popularity in high society. The secret of its attraction was in a new philosophy, singing a simple life in the country and abandoning the cult of cold reason in favour of feelings.

Rousseau’s characters served as an inspirational example: the most refined aristocrats tried to live according to the motto “Back to nature!” The pastoral fashion spread not only to clothes, but also over to other spheres of life: noblewomen kept sheep and lambs as pets, set up dairy farms, where they personally milked cows, laid out gardens, grew fruit and vegetables and then proudly treated each other to the products of their labour.

It remains unclear whether the little Mozart perceived the ideas of Rousseau’s “golden age”, – most likely, he just loved the merry fairy-tale about two lovers and the ingenious rogue sorcerer who helped them. The music of Bastien und Bastienne is based on the realistic genre, there is a lot of folksy humour, but, at the same time, it is marked by Mozart’s elegance. At the Primorsky Stage of the Mariinsky Theatre the opera is staged by the creative tandem – director Daria Panteleeva and stage-designer Pyotr Okunev. There is no doubt that the Primorsky audience will immediately love the kind and cheerful performance filled with pastoral Rococo idyll.