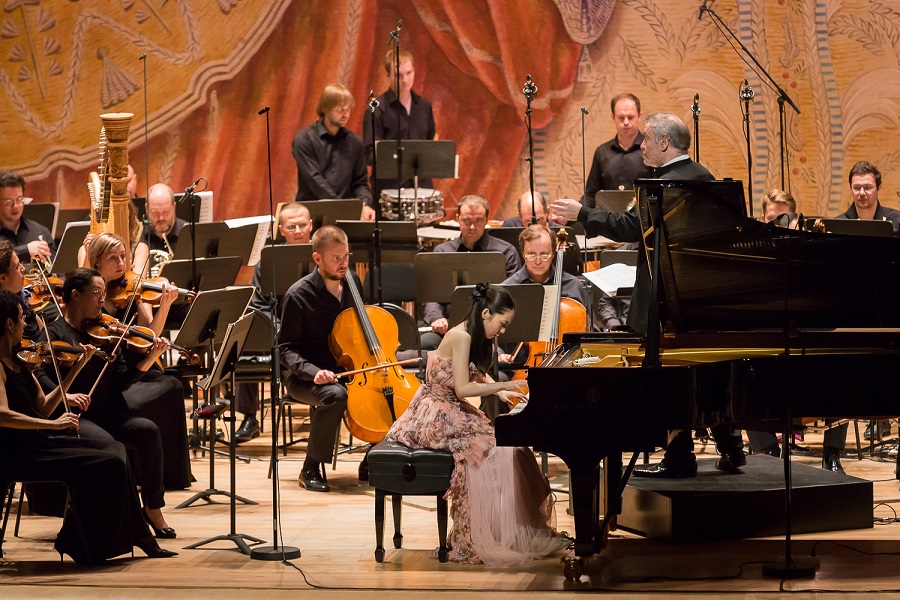 Marking 135 years since the birth of Igor Stravinsky

When Mozart turned to composing violin concerti in 1775, he was already well familiar with the concerto styles of Vivaldi and Corelli and had made extensive studies of scores by Tartini, Geminiani, Locatelli and Boccherini. And, of course, in his concerti he attempted — particularly starting with the Third in G Major — to follow stricter and deeper images of the genre. Not for a second did Mozart dampen his lively and stormy temperament with the chains of the “classical” style. He combined sincerity and the truth of lyrical effusion with dazzle and wit, at the same time avoiding external effects. The Fifth Concerto is, beyond doubt, one of Mozart’s greatest achievements; in it he literally sums up all of his achievements in the genre that he had tried out himself as a composer and performer in one person. In the Allegro, the lofty lyricism is blended with gracious archness; the confessionary pages of the Adagio are filled with direct and deep emotion. In the final Rondo the refined minuet frames the suddenly explosive and stormy intermezzo “alla turca” (which is why the Concerto is sometimes known as the “Turkish Concerto”). Mozart borrowed this section from music for a ballet scene in “Envy in the Seraglio” which he had written for the early opera Lucio Silla.

Concerto No.1 for piano and orchestra (1954) is the first serious opus by Rodion Shchedrin, written by him while he was still a student as one of his academic assignments on composition. The Concerto music reflected the findings of the folklore expedition around the Vologda Region villages in 1953, during which the young musician had studied the contemporary life of a folk song.

He was particularly impressed by an unsophisticated and unassuming chastushka – the most in-demand genre at that time, which nobody took seriously. But Shchedrin thought differently: “I’m deeply convinced that melodies and rhythms of the modern chastushka is the richest, creatively precious material for a Soviet composer. And I think, it’s time to put a stop to this prejudiced attitude towards the musical text of a chastushka!” he wrote passionately in a critical article after his return from the trip.
Shchedrin decides to misbehave a little and incorporates the melody of the popular song Semyonovna into the finale of his Concerto for Piano and Orchestra. Such unheard of cheek scandalized the Conservatory professors so much that they wanted to give him a satisfactory mark for this “state-of-art” composition. However, after the brilliant presentation of the Concerto by Shchedrin, then a fourth-year student, on stage of the Moscow Conservatory, without any requests or applications he was accepted to the Union of Composers – an unprecedented case for that time!
The first Piano Concerto is by no means a student’s work, it clearly demonstrates originality of thinking of the young author. Apart from chastushki, Shchedrin harmoniously intertwined into a classical concerto form most diverse folklore motives – a lullaby (Maestoso con moto), and a Russian khorovod dance song (Passacaglia), a seasonal peasant chant “We’ve just been sawing” (Scherzo-toccata). But what is most important about this composition is that all movements of the Concerto is imbued with the feeling of joy, witty creative ingeniousness and pulsating energy.

The ballet Pétrouchka may be spoken of as a dramatic musical opus by Igor Stravinsky which holds an exceptional place in new music. <…> The thing that touches me in the music of Pétrouchka is the characters of Pétrouchka and the Moor. Not because the cries of the oboe so closely resemble the nasal voice of puppeteer who accompanies the movements of Pétrouchka the puppet through silly cries through his nose. Mozart said that the most dreadful situations should be conveyed in such a manner that the music soothes the ears. Pétrouchka is an example of how, tormenting the ears, one can caress the soul. It sits well with me. I can't express how wonderful it is for me that the composer found those sounds, those combinations of sounds and timbres that depict before my eyes the image of the loving, downtrodden and forever miserable Pétrouchka. Now, when I choose these words to describe what Pétrouchka is, I feel how inadequate words are and how helpless I am, and value all the more the eloquence of the music and the gestures.
The entire image of the Moor embodies blunt self-satisfaction. A voluptuous lucky man. A favourite child of Fate. Everything in him is foolish. The sounds that Stravinsky do not caress the ears. There is no melody that provides pleasure. No-one would ever think of singing the Moor's melody for their own pleasure. To a large extent it is barking, snorting or bass pizzicatos. But each integral image is formed in the imagination. It is such a joy that the character is so accurately expressed.

Michel Fokine. Extract from the book "Against the Tide"