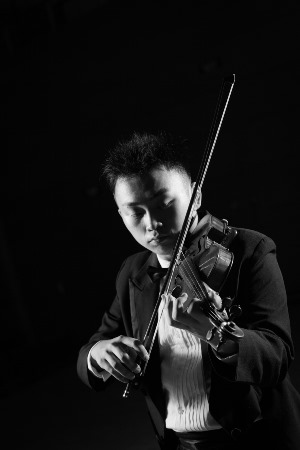 He Ziyu was born on 24 April, 1999 in Qingdao and began playing the violin at the age of 5. His first violin teacher was Professor Xiangrong Zhang. In 2010, in Beijing, he was introduced to Professor Paul Roczek from the Mozarteum University Salzburg, who recognised his exceptional talent and his great instrumental and artistic potential and invited him to study with him in Salzburg and to attend the International Summer Academy.

Since 2011, Ziyu has been living in Salzburg and studying violin with Professor Paul Roczek and viola with Professor Thomas Riebl, both at the Mozarteum University. He has attended masterclasses with such celebrated musicians as Ivry Gitlis, Ani Schnarch, Schmuel Ashkenasi Vadim Gluzman, Chaim Taub, Petru Munteanu in Keshet Eilon (Israel) and in Salzburg. Ziyu He plays the "Schneiderhan" Stradivarius violin (1715), which is on loan to him by Beare's International Violin Society.

The young Chinese violinist has recently attracted great attention, on making his appearence on the international stage. The 2016/17 season saw his debut with the Vienna Philharmonic Orchestra playing Bartók's Second Violin Concerto under the baton of Adam Fischer in the Viennese Musikverein. He thus goes down in history as one of the youngest soloists ever to be invited to perform with the Vienna Philharmonic Orchestra. In 2014, Ziyu won the First Prize, representing Austria at the Eurovision Young Musicians Competition in Cologne, which was broadcast on TV all over Europe. The following year he won first prize in his age group at the Mozart Competition in Zhuhai, China and at the International Instrumental Competition in Markneukirchen, Germany.

In February 2016, he won the first prize and the prize for the best interpretation of the new composition at the International Mozart Competition in Salzburg. Only two months later he won the first prize in the Senior Division and three further prizes at the renowned Yehudi Menuhin Competition in London. This was closely followed by the second prize and a special prize at the Leopold Mozart Competition in Augsburg and further international prizes at Kloster Schöntal and the Louis Spohr Competition in Weimar, both in Germany. In June 2012, he became a recipient of the Szymon Goldberg Award of the Music Academy in Messen as the youngest participant in all age divisions. in 2011, he was a prizewinner at the International Summer Academy of the Mozarteum University and was invited to perform Johann Sebastian Bach's Ciaconna at the Prizewinners' Concert during the Salzburg Festival.

Ziyu's concert performances have taken him as a young artist to Great Britain, Switzerland, Israel, France, Germany, Sweden and Italy. He showcased his extraordinary talent at three Opening Events of the Salzburg Festival in 2011-2013 and has performed at the Leopold Mozart Centre at Augsburg University, as well as at the Schumann House in Leipzig in a concert in memory of Niccolò Paganini. In November 2012, Ziyu made his debut with orchestra with the Qingdao Symphony Orchestra, playing Saint-Saëns´ Rondo Capriccioso in his hometown of Qingdao, China. In September 2014, he performed a recital in the Robert Schumann House, Zwickau, Germany, and in November of the same year performed Prokofief's 2nd Violin Concerto with the Mozarteum University Symphony Orchestra conducted by Hans Graf.